Pre-orders for the smaller take on the Samsung phone flagship have begun, with the phone set to sell for around £250 on a pre-pay deal. That’s around half the price of the Samsung Galaxy S3, although the cost of the larger phone is starting to creep down too. 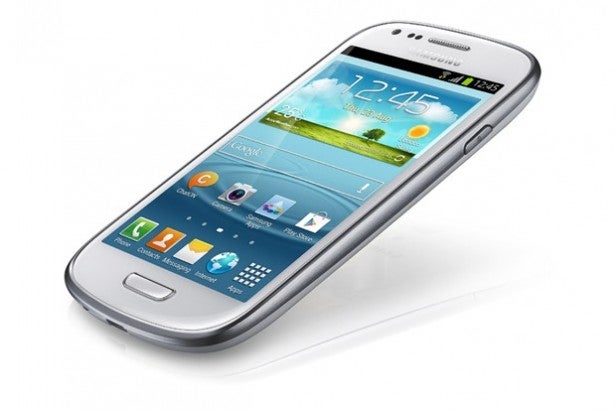 The Samsung Galaxy S3 Mini looks every bit the baby brother of the full-size Galaxy S3. Its body uses the same style of plastic outer, with a familiar removable battery cover on the rear. 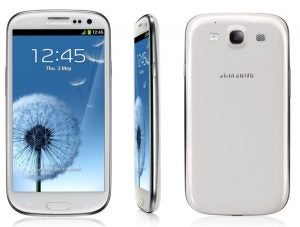 Its bezel-to-screen ratio is a little worse and the body is a little thicker than the original S3, but this is to be expected of a smaller framed, more affordable device. It’s just a bit of puppy fat, if you will. Several of its dimensions are eerily similar to the first Galaxy S phone, released all the way back in 2010. It’s 9.9mm thick, 119g and 63mm wide. 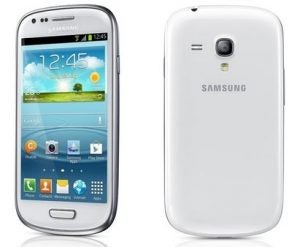 It won’t feel quite as slick in-hand as the big daddy 4.8in Galaxy S3, but if you find that phone a little too much for your hand to take, you’ll probably find the Mini edition much easier to live with.

If there’s one element of the Samsung Galaxy S3 Mini that points it out as a compromised device, it’s the screen.

Elements of it are more-than fine. Its Super AMOLED panel is great and the 4in size offers a good compromise between size and performance. It’s the resolution that’s the problem.

480 x 800 pixels feels out of date in this age of HD-resolution phones. Again, we’re reminded of the 2010 Samsung Galaxy S, which had a display of identical baseline specs. In the flesh it’ll look decent, but it’s not going to impress the techies. 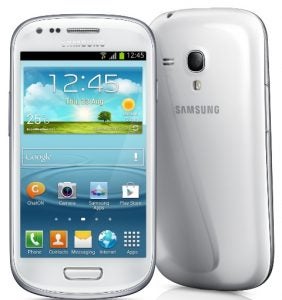 The Samsung Galaxy S3 offers a much better display. At 4.8in, it’ll be a little too large for some people, but its 720p resolution offers a superbly sharp image.

Both screens use Super AMOLED tech, which offers fantastic black levels and excellent contrast, although colours tend to look oversaturated. Samsung gives you some control over colour settings in its latest phones, though.

Other than the disappointing screen tech, the second-place part that shows the Galaxy S3 Mini up as a mid-range phone at best is the processor. Not only is it from a completely different processor family from the Galaxy S3’s Exynos model, it’s dual-core rather than quad-core.

This should give the Mini enough power to make Android Jelly Bean run perfectly smoothly 99 percent of the time, but it will mean that the small Galaxy S3 phone won’t produce anywhere near as impressive benchmark results. And it may not be able to keep up with some future 3D games. Each chipset uses a Mali-400 based graphics processing unit, but the Mali-400MP of the Galaxy S3 is optimised for quad-core processors and produces better results.

Both the number of cores and the clock speed is higher in the 6-month-old Galaxy S3. It uses a 1.4GHz quad-core chip while the S3 Mini has a 1GHz dual-core CPU.

The one part that the Galaxy S3 Mini arrives out front (for the time being) is software. It uses the latest Android version, Jelly Bean, with the Samsung TouchWiz UI smeared on top.

In most parts of the world, the Samsung Galaxy S3 still uses the previous edition, Android 4.0 Ice Cream Sandwich. Unless you live in Poland, you’ll still have to wait for the update to fly its way over to your neck of the woods. We did think that data could travel across the globe at near-light speeds, but perhaps Android updates are distributed by carrier pigeon these days…

Samsung deserves a high-five for some of its hardware approaches taken in both the Samsung Galaxy S3 Mini and Galaxy S3. Both phones use the up-and-coming NFC wireless communications standard, have all the usual Wi-Fi/Bluetooth/GPS gubbins and feature the industry standard microUSB slot for charging and data transfer.

This microUSB port is MHL-compliant too, letting you output HD video and surround audio when using the right kind of cable. The one downer is that Samsung has made this port ever-so-slightly proprietary and it’ll reportedly only work properly as a video output when used with Samsung’s own cable. This costs around £20.