It’s official, Instagram sneakily released its own version of Stories which is now available to users around the world – providing you’ve updated the app.

Wait, hold on a second – didn’t Snapchat invent stories? Well the simple answer is yes, it did. Instagram’s CEO, Kevin Systrom has even admitted as much. And no laws have been broken since the functionality of an app isn’t protected, only the expression of it is. So Instagram has done nothing wrong, at least technically. 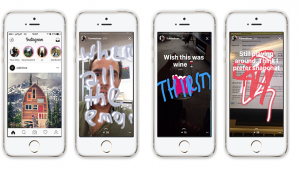 Stories are a collection of photos and/or videos that are compiled throughout the day to form a narrative (of sorts). Each clip lasts a maximum of ten seconds, but you can add an unlimited number of images or videos for your story. It disappears after 24 hours, just like with Snapchat.

Instagram stories from the people you follow will appear at the top of your feed. Simply scroll left to right, to see who’s been posting. It seems the controversial algorithm that promotes people you interact with the most in your photo feed also works for Stories.

If you click on the story, you can see what you’ve posted, delete it, change the sharing settings, and see who’s seen your post, which is a bit of a pain but this is something that will probably change as the Facebook model – don’t forget they bought it for a ton of cash a few years back – encourages users to like and interact with posts.

So is it better than Snapchat?

Its functionality works better, is far less complicated, and allows you to share and watch stories from more people you actually care about. And from a marketing perspective, the following sums it up: Snapchat says that on any given day, it reaches 41% of 18-34 year-olds in the US. But a recent study suggests that 32% of teens in the US rate Instagram as their most important social network – giving it the power to reach the majority of people who care about it more.

And they’re right. More companies and businesses are on Instagram and so are more of your mates. Why build a following from scratch on a new platform – especially one you thought was used for sending saucy pictures to secret lovers which would later disappear – when you already have hundreds, if not thousands of followers on Instagram?

The other genius of Instagram’s strategy is that they had a gap to fill. Instagram is unique in that many users curate their feeds to look as attractive as possible. The downside of this emphasis on quality posting is that users post less than they might otherwise. But with Stories, users can add all the silliness of their day without over-sharing and flooding their followers’ feeds with funny faces and a psychedelic “#howcrazyismyday?!!!!!!” written over it, because it doesn’t show up on anyone’s feed.

So now Instagram potentially gets to keep the users it would’ve previously lost to Snapchat. 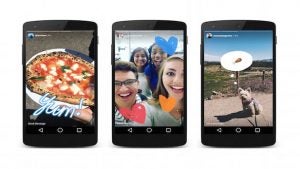 Can Snapchat really compete with this? Probably not

I have used Instagram since 2011 and although it’s changed hugely, it’s still a fantastic way of sharing your wonderful photos and videos and building an audience of faithful followers. Many careers were born on Instagram. By contrast, Snapchat has been going for much the same time and, although it has more daily users than Twitter, a lot of people still don’t understand how it works. I don’t post Snapchat stories because most of my friends aren’t on it. Even though I follow a lot of people on it, I don’t actually know them.

Instagram have made the concept easier and it means more people will see my stories and I’ll be able to view more of my friend’s stories. The only thing that is missing is all the colourful bitemojis, facial recognition technology and the geofilters. But the beauty is if you’ve never used Snapchat, you won’t miss them anyway.

All in all, the interface that anyone born before 1990 struggles with on Snapchat is far simpler on Instagram . It takes a fair amount of intuition and millennial flair to own Snapchat whereas my 63 year-old mother can easily share photos from her recent holiday to Malta on Instagram. Ask her to post a Snapchat story and even with a good rundown, she’d still be lost. 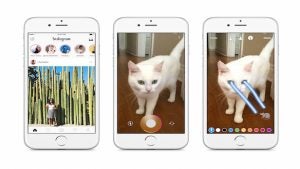 Snapchat is better, but won’t be for long

The thing that Instagram hasn’t managed to emulate so successfully is Snapchat’s inherent silliness. You can pin slices of pizza on your posts, you can use your own bitemoji to add a bit of your own emotion and, of course, you can add those effects that turn you into Katie Perry or a bunny rabbit, and that’s the whole point.

What did you think?

Yesterday we ran a poll to see which you thought was better, and this is how you voted: 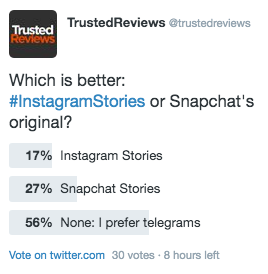 If you disagree, leave a comment below or use the hashtag and mention us in your tweets. And if you want to follow my Instagram stories, you can do so @framedman.

WATCH: The Refresh – Catch up on the latest tech news

What do you think of Instagram stories? Let us know in the comments.