If you were to simply look at the numbers, you might conclude that the Google Nexus 4 has the edge on the iPhone 5’s camera, with a slightly higher-resolution secondary sensor. However, in real-life usage, the conclusion is quite different. 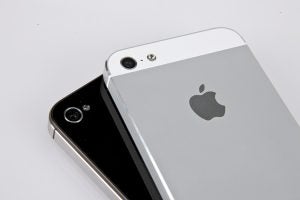 The iPhone 5 on top of the iPhone 4S

There’s more noise in the Google Nexus 4’s snaps, low light performance is much worse and ease of use isn’t quite as good – the iPhone 5 snapper performs better all-round. Its only close rivals in its field come from Samsung, with phones like the Samsung Galaxy S3, and Nokia’s 920 – which offers excellent low-light performance for a smartphone. 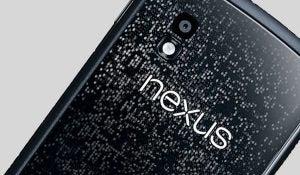 However, before you rule-out the Google Nexus 4 altogether, we should stress that the phone is perfectly good for all sorts of casual photography. It’s just not quite up there with the best phone cameras in the world.

The iPhone 5 was among the first devices to use the Lightning port. This is a new Apple proprietary connector that takes over from the 30-pin socket that was used in iPods, iPads and iPhones for what feels like forever. It’s a much smaller, neater design that doesn’t trade in any functionality potential to lose those pins – the Lightning port has eight discrete pins. 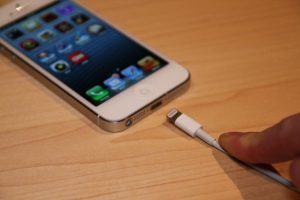 Changing to the new standard is a pain for many though. Those who own lots of previous Apple devices will be saddened that their stash of old charge cables is more-or-less useless, and those who own expensive audio docks won’t be pleased either. Apple has produced a sort-of solution to the problem, though. You can get a 30-pin to Lightning port adapter for £25, and it’ll work with the majority of audio and charging docks. It doesn’t transmit video, however. 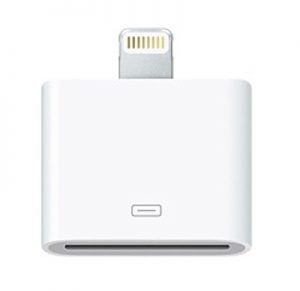 The Google Nexus 4 takes a plain and sensible path, using an industry-standard microUSB port. This is used to charge the battery, transfer files to the internal memory.

It uses the SlimPort standard, which can transmit HD video to a telly with the right adapter. If you haven’t heard of this, it’s because the Google Nexus 4 is one of the first devices to use SlimPort. A SlimPort-to-HDMI adapter costs around £25.

Both these phones fail to offer expandable memory. Once upon a time, almost every Android phone offered a microSD slot, but not so any more. You can get a 8GB model of the Google Nexus 4 for £239 or a 16GB edition for £279. That’s your lot.

If money is no object, the iPhone 5 is the clear winner. But if you think 16GB will do you then the Google Nexus 4 wins.

If you simply have to have as much storage as possible, though, then the LG Optimus 4X HD, Samsung Galaxy S3 and Samsung Galaxy Note are among the best options given their 16GB built-in storage and microSD slots (that’s up to 80GB total).

Another case of the figures not quite telling the full story, the Google Nexus 4’s battery is technically much larger than the iPhone 5’s – 2100mAh over 1440mAh – but performance does not blast the iPhone 5 into submission. 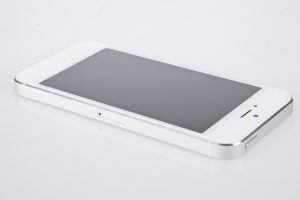 For an Android phone, battery stamina of the Google Nexus 4 is very good, but as power management in Android is much less effective than it is in iOS, the difference in capacity doesn’t result in mammoth improvements. This is in part down to the screen too – powering a 4.7-inch screen requires more power than a 4-inch one.

With 3G enabled, you’ll have to charge both phones once within two days, presuming mid-level use throughout the day.

Buying an iPhone 5 is a relatively level playing field. Wherever you go, you’re going to have to pay a large wedge of cash, either in a lump sum or over the course of a couple of years on contract. Without resulting to crime, there’s no way to get an iPhone 5 on the cheap.

The Google Nexus 4 is a different story. Buy the phone direct from Google and you can snag it for £239 (16GB edition). For a top-spec Android phone, that’s an absolute bargain. However, at the time of writing stock from the Google Play devices store is scarcer than herds of unicorns.

You can get a Google Nexus 4 from elsewhere, but it’ll cost you a lot more money. O2 currently sells the device for £400 on a pre-pay deal, or you can get it for free on contracts from £36 a month. That’s a far less attractive proposition.

The Google Nexus 4 is an excellent device. It’s a top-end phone that can be bought for mid-range money if you’re lucky enough to snag one from the Google Play store. However, don’t fool yourself into thinking that you’re getting more than an iPhone 5 for half the price. The camera, build and graphical power of the latest iPhone are greater.

If you remotely care about how much money you spend, though, and are willing to wait to grab a phone from the Google Play device, it makes an excellent lower-cost alternative to the iPhone 5.  However, we recommend giving Android a test drive beforehand if you’re not used to Google’s mobile OS.