What is Microsoft’s Siri rival really capable of? We’ve picked our favourite Cortana tips and tricks.

Who is Cortana? She’s the the digital assistant for Windows. Oh, and one of the lead characters from the Halo game series. Windows 10 may be a bit less geeky than some of the older versions, but Microsoft still has some nerd chops.

We’ve spent plenty of time living with Cortana to help you get the most out of the Windows alternative to Siri. Here’s our pick of the best features

Here’s a really basic one. Cortana started off as a Windows Phone feature, but it’s now part of Windows 10 too. On a Windows phone you access her by pressing the ‘search’ soft key. On a PC, she’s part of the dock at the bottom of the screen.

She’s also coming to Android. Cortana is currently in beta, though, so you have to jump through a few more hoops than usual to try her out.

You can get her to sing

Let’s start with a silly one. Cortana can sing. You can get her to fire up just by saying ‘sing me a song’.

Don’t expect Taylor Swift, and she only sings a couple of different songs. However you’ll notice that when she’s singing Cortana doesn’t sound quite as, well, robotic as she usually does. That’s because these parts have been properly recorded by voice of Cortana Jen Taylor, not synthesised. 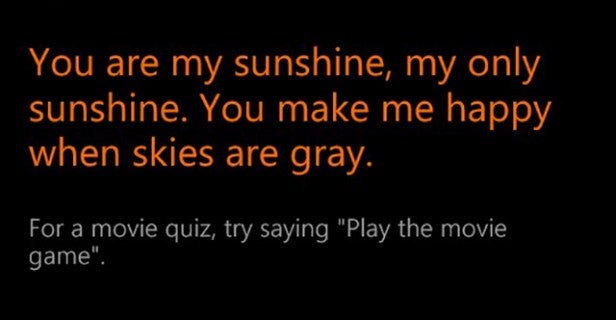 You can set reminders by location

One of the more useful bits of Cortana functionality is being able to set a reminder based on your location. So you could, for example, set an alarm that’ll go off when you reach Covent Garden.

We tend to think of alarms as things all about time, but they can be set off by locations too. To do this just say ‘Set a Reminder’. Then you’ll have to tell Cortana what you want to be reminded of, and that the condition is that you’ll be reaching a place. 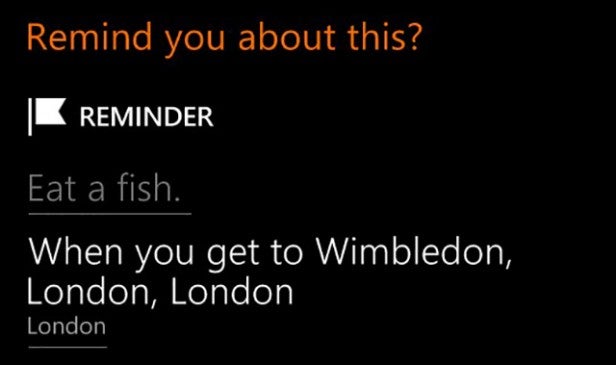 Cortana can give you a movie quiz

Up for some more fun? Cortana can give you a movie quiz. Say ‘Play the movie game’ and she’ll give you a clue to a film. She doesn’t dig too deep into the mines of IMDb. In my experience the quiz involved identifying some pretty massive movies.

If you can’t get the film on first go, you can opt for another clue too. Sure, there are better games available for Windows 10 for phones. But, let’s be honest, there aren’t all that many of them. 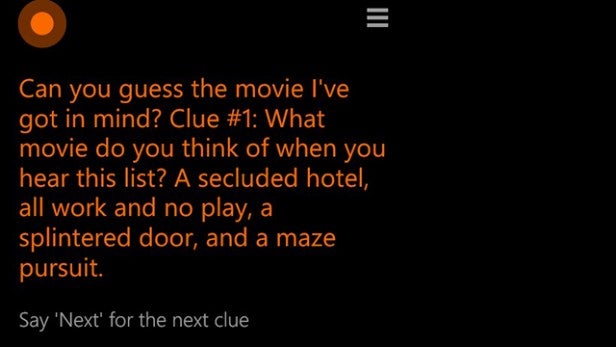 She can do currency conversions

Cortana is pretty good at dealing with different currencies. Just ask her “what’s X Euros in pounds” or something similar and she’ll read out the results.

It’s a pretty good way to work out how much holiday money to take out. Or exactly how you’re getting screwed by buying an iPhone outside of the US.

You can ask Cortana for directions simply by asking “How to I get to X”. It’s particularly useful with a phone.

What it does is to launch the Maps app, pasting the necessary locations in the directions input boxes. It’s pretty handy for saving some typing time.

It’s probably the fastest way to setup an alarm

One of the few ways I actually use Cortana in real life is to set alarms. It’s much less fiddly than flicking about in menus to set one up ‘manually’.

How to do so is pretty obvious. You just say ‘Set an alarm for 6AM’, or whatever time you’re after, and Cortana will do the rest. After it has done so, an alarm entry will appear on-screen, which you can edit if she misunderstood you a bit.

Related: Windows 10 tips, tricks and secret features to try out 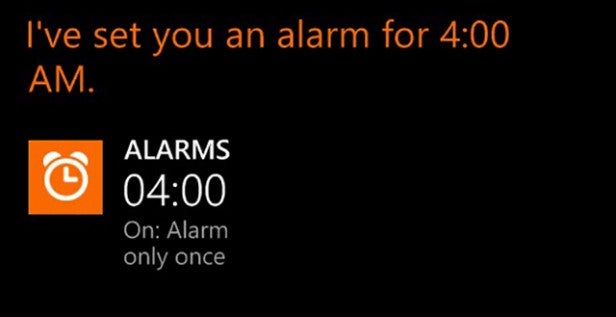 Cortana can launch apps on phones and computers

One neat little time-saver is using Cortana to load apps, just by saying “run X”. This works on phones and Windows computers too.

It’s hardly an essential Cortana use, but may save the truly thumb-lazy a couple of seconds on a Windows phone.

She’ll flip a coin for you

This one is a neat little easter egg. You can ask Siri to flip a coin for you, and after a few seconds’ wait one side of a 50p coin (in the UK at least) will appear.

It’s little more than a geeky way to decide who pays for the next drinks, or which film to watch. But it’s a cute little extra. 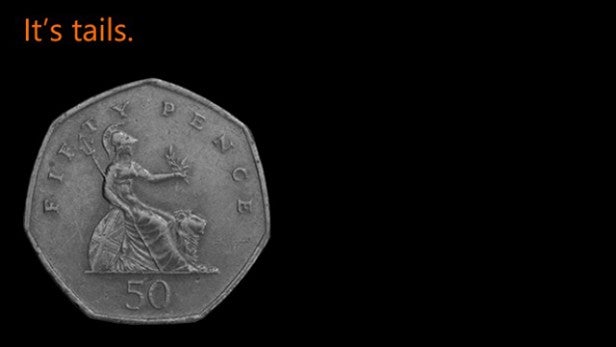 She can look up dictionary definitions (PC)

On the desktop/laptop version of Cortana, your digital assistant has access to the Oxford dictionary. She’ll give you the dictionary definition of words when you ask her to ‘Define X’.

This seems to work natively on desktops/laptops, but I couldn’t get it to work on a phone, not without another little tweak anyway…

Make use of app integration

One of the best bits about Cortana is how it can integrate with Windows Phone apps to unlock even more features. Certain apps can hook into the digital assistant to give it extra abilities.

For example, dictionary.com adds definitions to the phone side, and Shazam offers another way to identify audio tracks (there’s also a music button that does it natively). You can just say ‘Shazam this’ once the app is installed to identify tracks playing. Flixster and Twitter are two other apps that talk to Cortana.

One, predictably enough, can be used to sent tweets right from Cortana while with Flixster you can say ‘Flixster show me top movies’ and you’ll get direct movie info. 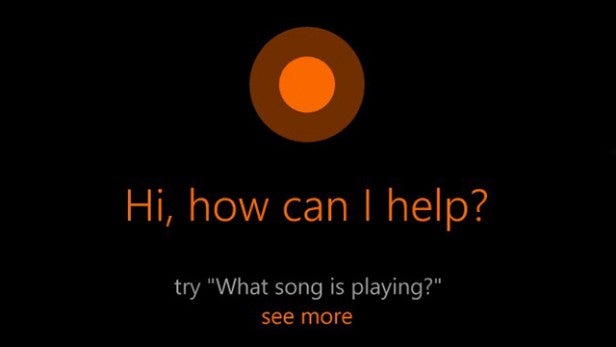 She’ll look up the weather

An obvious Cortana essential is weather. It must be one of her most-used features.

It doesn’t just end at asking for the weather right now at your current location, though. You can ask about pretty much any location in the world. It doesn’t work for the moon, sadly. Cortana is also good at looking up upcoming weather conditions. She’ll give you a ‘next week’ weather report without breaking into a sweat.

Those reports are fully voiced too.

You can ask her how tall and old famous people are

Cortana has access to loads of little facts about people, the sorts of things that might come up in a low-rent pub quiz. You can ask her how tall Bill Gates is.

Or how old Barack Obama is.

The usefulness of this only really extends to showing off Cortana to people who have never even met Siri before, though. It’s not as if you’re going to get away with using it in an exam, is it? 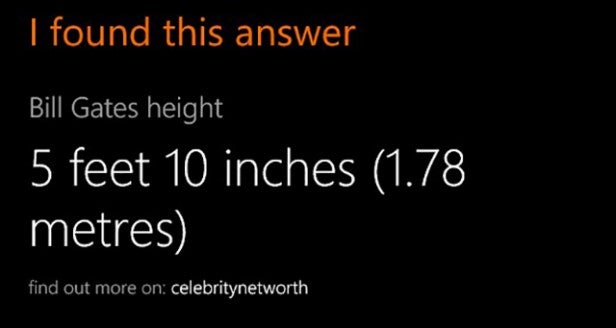 Like Google Now or Siri, one of the lead features of Cortana is being able to ask for directions. However, phrase it a bit differently and you’ll get basic directions lead by exactly how long it’ll take you. Because, let’s be honest, that’s often the more important bit.

Ask “how long will it take to get to X”, and Cortana will tell you, along with the method of transport set as default in the Maps app. As a Londoner, that means Cortana tells you what bus or train to take. It’s pretty handy. And even quicker than CityMapper. Which still isn’t available for Windows Phone.

Have you found any great Cortana features? Let us know in the comments section below.