123 Far too often in the age of clickbait are we admonished to ‘Stop everything’ by news headlines. Today, however, we’re entirely justified: Robot Wars is back.

Since going off the air in 2004, the show has left a hole in the hearts of those who long for the days of earnest garage-dwelling middle-aged engineers hauling badly moulded metal into the BBC studios to do battle. It was a highlight of the channel’s evening programming.

That moment of sublime juxtaposition when excruciatingly dull team members would introduce their unrelenting tool of destruction. 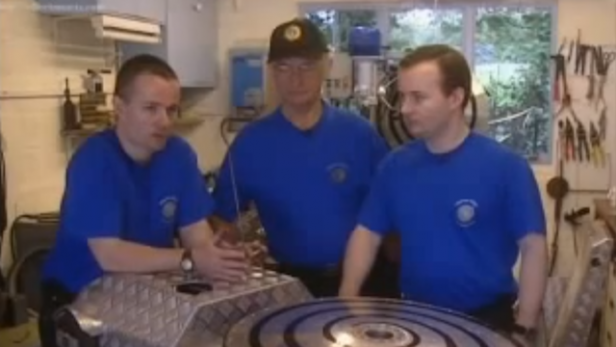 ‘Hi I’m John from Hull, and this is Steven and we are team DeathMaim.’

And that studio, with its industrial, decayed decor seemed wholly out of place in the BBC’s evening lineup, sandwiched as it invariably was between The Simpsons and Top of the Pops. What carnage awaited us in that dank dungeon of robotic destruction! And Craig Charles was there! And Philippa Forrester! What a time to be alive. 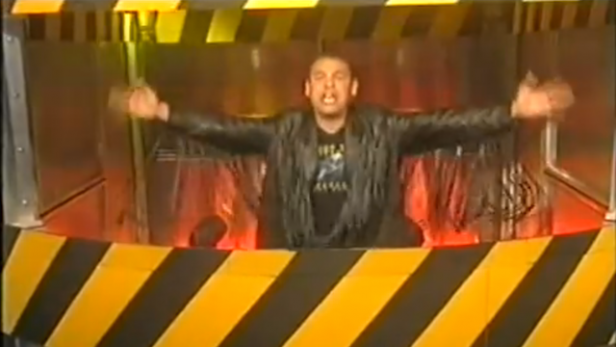 Everyone had a favourite robot, from the seemingly indestructible Hypno-Disc to those wuss flipper machines that ruined perfectly good opportunities for all-out evisceration by toppling their opponents.

And the House Robots! Unashamedly named things like Sir Killalot, Sgt. Bash, and that rubbish one, Shunt. So many classics.

We’ve managed to stifle our unbridled glee at the show’s return for long enough to bring you a rundown of the greatest robots ever to grace the Robot Wars stage.

So read on for our definitive guide to some of the great heroes of the early 2000s. Some triumphed, some we sadly lost in battle. But all will be remembered fondly.

1. Hypno-Disc – The one that never won a series but was totally epic 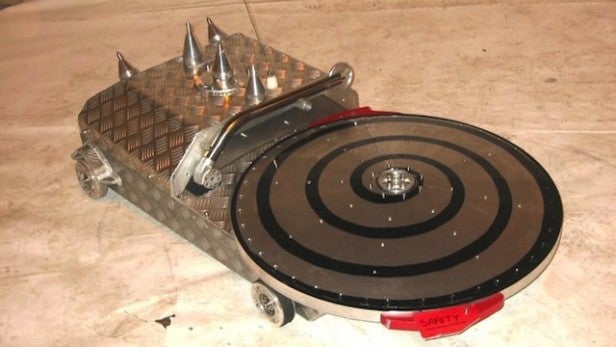 Woe betide any robot who faced off against the incomparable Hypno-Disc. This thing looked like something out of the Saw movies. As soon as you saw that vicious disc in action, things got real.

Father-son teams were forced to watch in tears as their flimsy machines were shredded by Hypno-Disc’s kinetic flywheel.

The Disc’s one weakness? Flippers. Those pansy contraptions that opted for intelligence over muscle.

Still, Hypno-Disc proved it wasn’t to be trifled with in its début series three match against the puny Robogeddon – see above video.

Following that magnificent début, the all-out killing machine went on to have an illustrious career where stuff like this was the norm.

Defeated by Chaos in the series three final, Hypno-Disc would return for several series thereafter but would never win a title.

With a win/loss record of 20 to 10, one concession, and some of the best highlights, its legacy stands the test of time. Will there be a Hypno-Disc 2? We certainly hope so.

2. Razer – The one that was actually quite well made 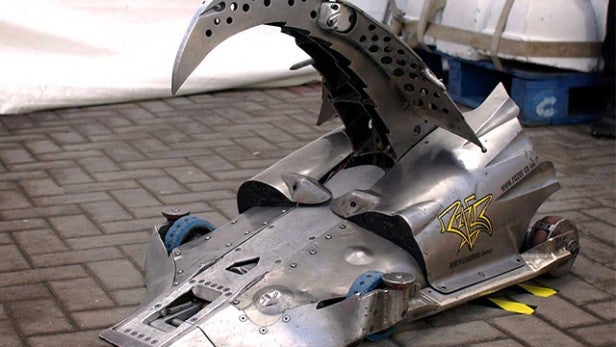 There was something delightfully unnerving about the slow descending of Razer’s menacing blade. As soon as this thing had a robot in its clutches, that blade begun to sink, and the nation collectively shuddered with glee.

Razer was an all round predator on the Robot Wars floor. Many a ‘KillCam’ featured some helpless machine being crushed as we were treated to delicious shots of all hope draining from the faces of those who dared to build an opponent to the mighty Razer. 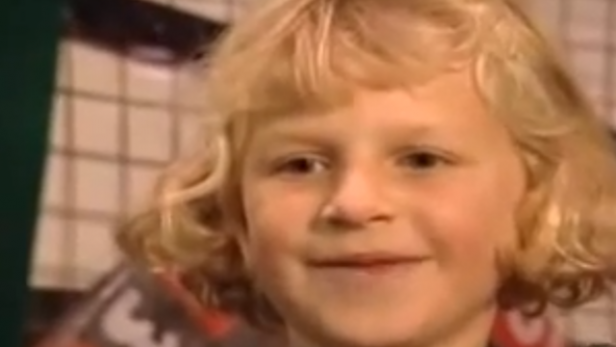 Things didn’t start so well for Razer, however. It had a disastrous first fight against Inquisitor, which ended in the House Robots collectively laying waste to the defeated Razer.

But the team returned for series three, four, five, and six, winning the fifth series and racking up a win/loss record of 40 to 5.

And there was that time that Razer had enough of House Robot Matilda: 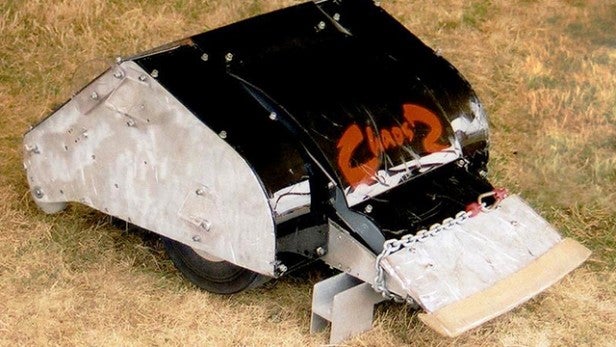 This black wedge relied on the old flipping technique, which was usually a pretty boring way of winning. But Chaos 2 managed to set itself apart from other flipping machines with a vicious and emphatic flip action that sent many an unsuspecting machine flying across the arena.

That included this nicely timed flip which sent the aptly named Firestorm flying into one of the random flamethrowers dotted around the Robot Wars arena.

Still, Chaos 2 even had the nerve to flip the hulking Sgt Bash, which earns it major points with us and its perfectly angled ramp made for some fantastic rolling flips.

With a win/loss record of 24 to 9 and two grand champion titles, Chaos 2 earns a place for those pesky flippers on this list.

We just hope the new series isn’t dominated by this style of robot, or things will get dull very quickly. 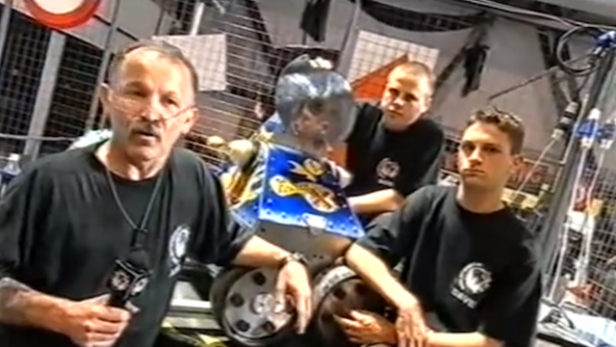 The scourge of flippers, Pussycat had four wheels, two electric saws, and always landed on its feet. Its exposed tyres were the machine’s weakness, and it never won any grand finals. But Pussycat was quick, and had an innovative design that set it apart from all its competitors.

What’s more, Pussycat kept reinventing itself. During its time on the show, it reappeared in various forms, with new weapons, and different finishes.

We love how it took full advantage of a Razer malfunction in this video, tumbling around the arena while Razer languished on the edges, then going in for some post-defeat fun. 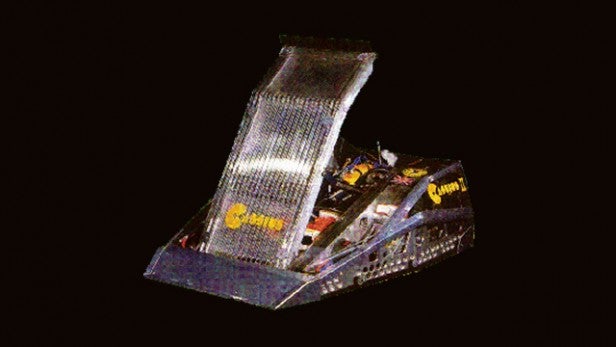 Cassius brought some variety to the flipping style, with an arm that would extend from the top of the robot’s body, rather than the bottom. The CO2 powered flipping ram meant this speedy contraption could self-right incredibly easily.

Cassius competed in the second and third series of Robot Wars, and although it never went the distance, it deserves credit for its powerful flipping arm/self-righting mechanism (or srimech) (yes, that was a thing).

The feature became essential following Cassius’ entry into the series. Therefore we pay tribute to the great robot here.

6. Dominator 2 – A really sharp spike on a stick 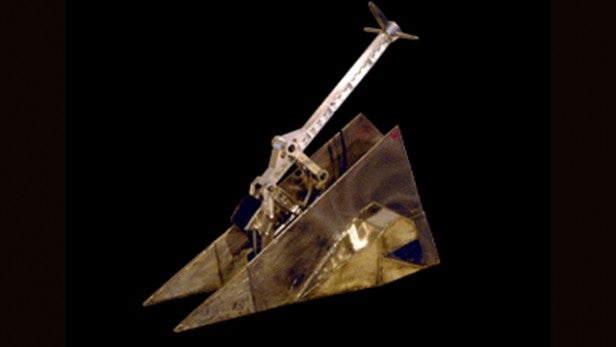 Now here was an exciting prospect. No flippers, no boring circular saws, just a really sharp spike on a stick.

It was Dominator 2’s vicious hammer action that drew attention. It wouldn’t always hit home but when that spike landed it was game over. The action was so powerful it would cause the whole robot to convulse and rise off the ground.

It may not have won team Dominator any titles but it looked mean and waiting for the hammer to hit something was agonisingly tense in the best way possible. And with a win/loss record of 18 to 6, Dominator 2 proved it wasn’t messing around.

7. Sir Killalot – The house robot that was actually good

Technically one of the house robots, the downright scary Sir Killalot earns a special mention on this list simply for being awesome.

Dwelling in the Perimeter Patrol Zone, this beast was just waiting for one of its puny underlings to be defeated so that he could call in his mates Matilda, Sgt Bash, and Shunt for a full on gang beatdown.

He even had a lance which he would frequently use to spear losing contenders and hold them up for the whole audience to see.

Let’s hope the great Sir K returns for the new series when it finally arrives.

Let us know whether you’re looking forward to the new series in the comments below.