While none of the cameras out of our sextet particularly disappoints, and all of the cameras are available at an attractive price point, when it comes down to picking the best of the group it’s fair to say that some are more impressive than others.

Let’s start with the Canon EOS M – one of the more attractive of the group on paper and in terms of its solid build quality, not to mention the fact that it’s one of the most affordable models.

However, it’s let down by sluggish AF performance, a flaw accentuated by the impressive AF found elsewhere in the group. The model’s battery life is also disappointing, while the lack of support from an extensive native lens catalogue could well be the final nail in the coffin.

One of the group that’s well catered for in terms of lenses is the Olympus E-PL5, thanks to Olympus’s long history in the CSC market. The model also benefits from a well-designed tiltable LCD screen, extensive range of operational buttons and a particularly fast and responsive AF system.

With this in mind, the Olympus E-PL5 is certainly one to consider and comes highly recommended.

Another model from an established system is the Sony NEX-5R. In theory this should be right up there with the best of the bunch, although in practice it disappoints somewhat.

The unintuitive menu system makes changing camera settings on the go something of a pain, while the model’s touch screen is a long way from being the most responsive in the group, and for those reasons it’s probably best to look elsewhere.

The Nikon 1 J3 is a CSC that’s from a newer CSC system, and one which has tried to take a different approach to the CSC market on the whole.

While the smaller sensor and electronic shutter do result in some really impressive shooting speeds and performance, ultimately the model is let down by poor image quality at higher ISO settings and difficulties when trying to take manual control of shooting settings.

The same can be said of the Samsung NX2000 to a certain extent. While the camera impresses on paper, with a touch screen as highly specified as almost any camera on the market, it too suffers from poor handling and unintuitive operation, as well as some major write speed issues. 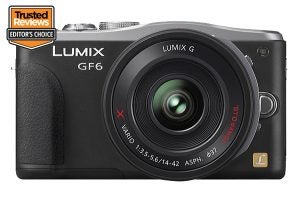 All that leaves is the Panasonic Lumix GF6, and on the whole this has to be the camera of choice – just about trumping the Olympus PEN E-PL5.

The GF6 offers the perfect combination of solid performance, strong image quality and a full feature-set that matches almost any camera at this price point.

All things being considered, there’s very little that the GF6 lacks and it’s a camera that represents fantastic value for money.