If there were a game of Computex bingo, one of the boxes would definitely say ‘saw a ridiculously overbuilt gaming PC’.

You can’t help but stumble across them at Computex. The integrators and peripherals sections are chock full of the things, and the vast majority of them are stupidly impressive. Here are five that particularly caught my eye.

This machine was one of the finalists in the 2015 Thermaltake CaseMOD invitational. Built around one of Thermaltake’s Core X9 cases, Christianson’s work has made it completely unrecognisable. 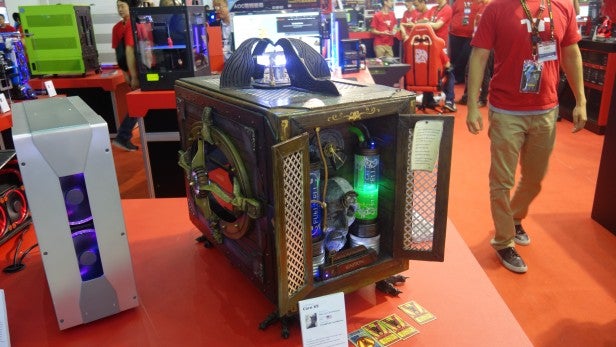 Highlights include the two brightly coloured liquid cooling tanks, charmingly labelled as ‘fuel cells’ for the time machine, the dial on the side pointing to the past, present or future, and the haunting handwritten note on the inside that tells this case’s backstory – our time traveller never intended to come to 2016. Creepy, but then Christianson says he took inspiration from Tim Burton and Alice in Wonderland, so perhaps not surprising.

No specifications were mentioned for the Time Machine, but since it was built in the 1800s it’s unlikely we’d recognise any of the components anyway.

We’re only at number two on the list and we’ve already found ourselves asking: “What makes a PC a PC?” Here, AsRock makes the answer easy: “When it’s completely broken”. 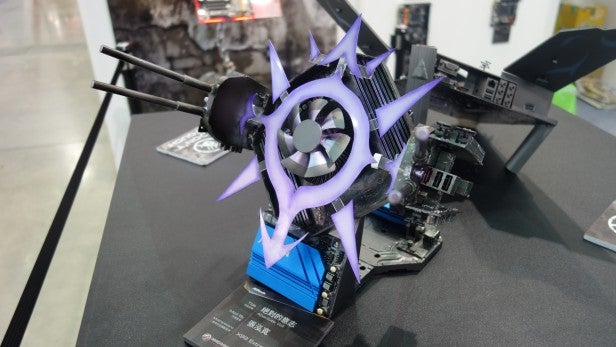 This piece, called Absolute Will, is based off an AsRock X99 Extreme. At first I thought that this could be a working PC, then I realised that several problems would prevent it from actually firing up: for starters, there’s no graphics card and (as we all know) the X99 chipset does not have onboard graphics. Second, there’s no power supply. Third, and most importantly, the motherboard has been chopped into pieces. Still, undeniably pretty. 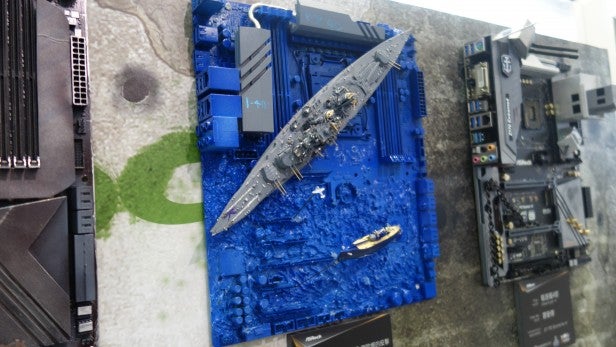 This piece, called Counter Attack, is based on an AsRock X99 WS motherboard. I’ll leave it to you to decide why I don’t think it’ll work.

Sometimes all you want from life is a big ol’ ball of sugar, and the MSI Cotton Candy machine delivers. Correction, when I visited on Thursday morning, it was not delivering any form of candy. Still, PC modder Mike Petereyns has done a great job of showing off MSI’s digital arctic camo-effect MSI B150M Mortar Arctic motherboard, which costs around £70. 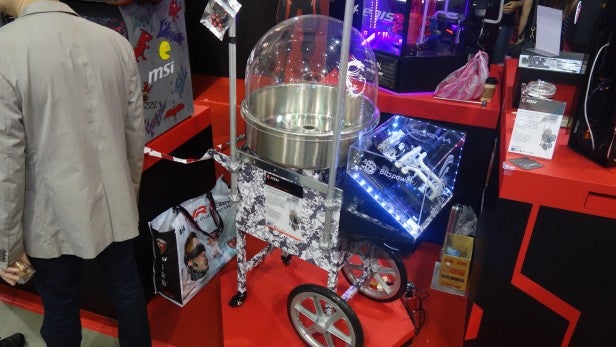 The rest of this machine a little more standard. The processor is extremely modest, taking the form of an Intel Core i3-6300, although that’s hooked up to 32GB ofHyperX 2666MHz DDR4 memory, which is a little more befitting of this rig. The graphics card is an MSI GTX 780 Ti and the whole lot is cooled by Bitspower liquid cooling. 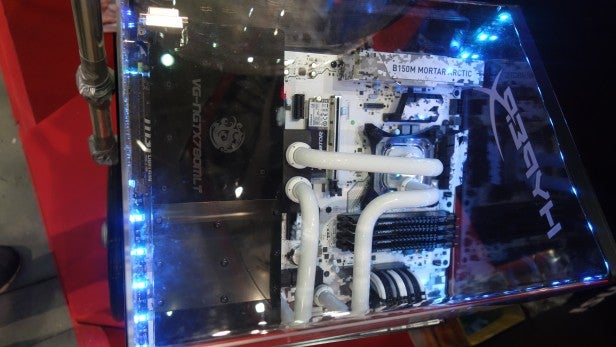 “I want this case to portray strength and stability… and simply boast muscle, steel and sex appeal.” 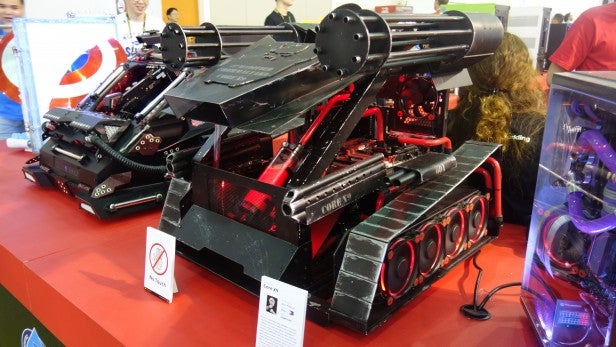 Steel: check. Muscle: check (in the metaphorical sense). Sex appeal: I’ll get back to you on that. Ali Abbas’ Thermaltake Core X9-based “POD II: The Stronghold”is a big fat tank with two eight-chamber gattling guns strapped to the top of it.

Nope, still no sex appeal. Tanks for the memories.

Uh-oh. We’re back in non-functional PC territory again. Here, Cooler Master has constructed an entirely Lego-based system, including a Lego CPU, Lego GPU and a Lego BuildMaster 5 case. I’m not familiar with the electrical conductivity figures of Lego, but I assume there’s a fair amount of resistance. 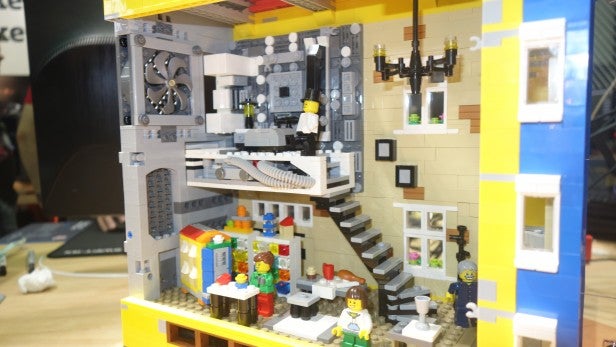 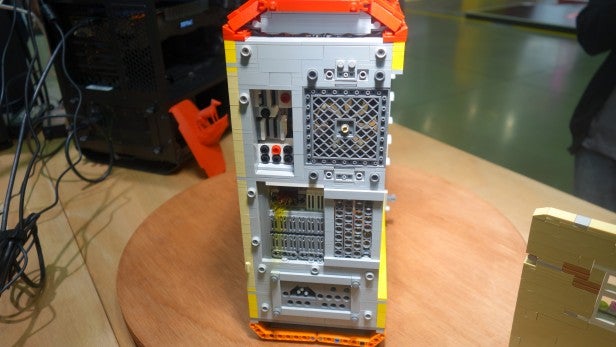 Inside this quite delightful case sits a family of PC gamers. To the left of the image, there’s another Cooler Master Lego PC case. A case within a case. A Cooler Master representative could not confirm whether there was indeed a third Lego case inside the second. At this point, I started to hear Hans Zimmer’s Time playing in my head, so I made my excuses and left. 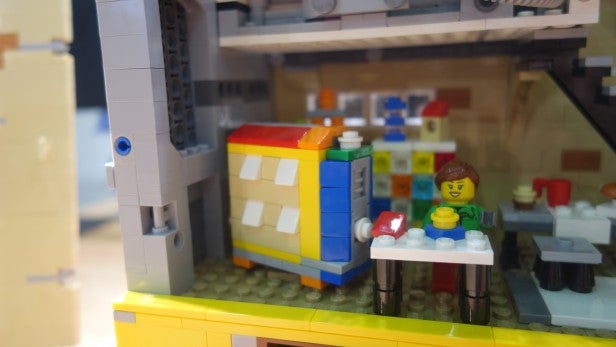 It’s a PC with tiny wheels. Based on a Corsair Carbide Clear 400C case, the subtle orange highlights and blue paintwork look fantastic alongside the blue and orange cable bundles inside the case. This rig is built to show off the Corsair Hydro H110i GT liquid cooling system, and also because Corsair really likes Rocket League. 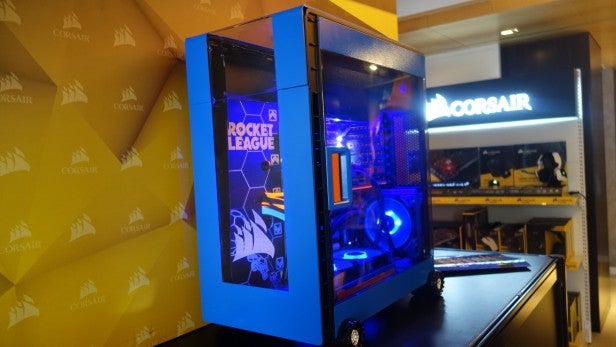 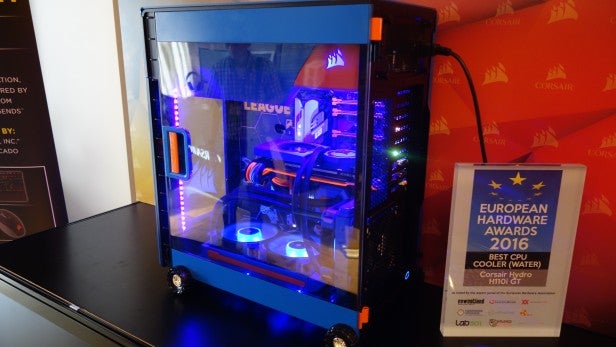 Which is your favourite? Let us know in the comments below.