As part of our Best of British tech week, we salute the standout photographers grabbing the most Likes, Retweets and Regrams

Say what you like about British food, British weather or British sports teams, one talent we have in Britain is producing great photographers who get social media. Just search Instagram, Twitter, Flickr and Facebook: you’ll find them all positively teeming with wonderful British photographers who will enrich your feeds, not only through striking imagery but also interesting opinions and links from the wider world of photography.

Whatever your taste, whether it’s portraiture, wildlife, architecture or landscape, you can find a British photographer doing it impeccably. Here are, for our money, 10 of the best to get you started. 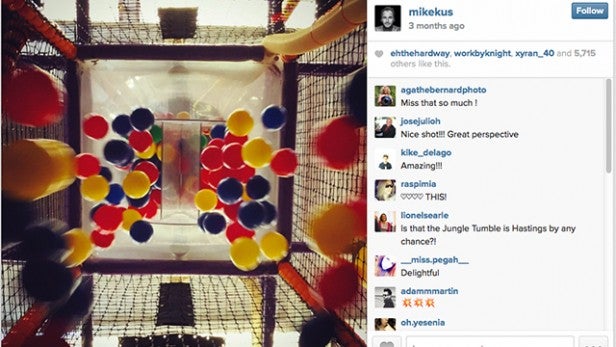 While he often travels to different spots around the UK, and has an excellent appreciation for architecture, one of Mike’s most admirable qualities as a photographer is his ability to create a great photo out of any situation. In Mike’s hands, a trip to a soft-play area with his children turns into a chance to grab an intriguing shot.

Mike is also on Twitter, where he posts less photography and focuses more on his graphic design work, including early concepts for logos and other projects. For anyone interested in visual culture, he’s worth a follow there, too. 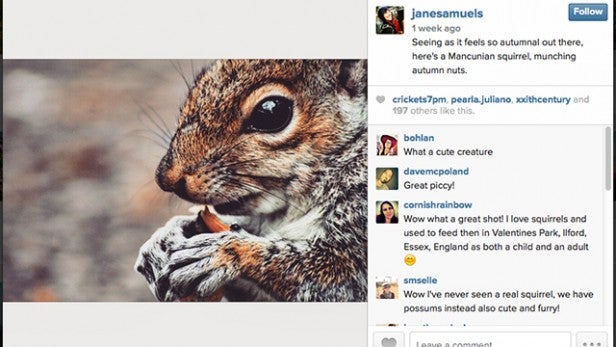 2. Jane Samuels
Though artist Jane Samuels has many strings to her bow, she’s perhaps most well-known for her Abandoned Buildings project. Armed with ropes, torches, gloves and face masks (as she puts it, “The uniform of the explorer, the activist and the criminal”) she explores former homes, schools and asylums, creating haunting photographs of empty rooms and decaying walls.

By following Jane on Twitter and Instagram you get not only an insight into her many projects but also shots of wildlife and countryside from her travels. An avid nature-lover, Jane also keeps a walking blog of her various adventures in the countryside, interspersed, of course, with plenty of lovely photography. 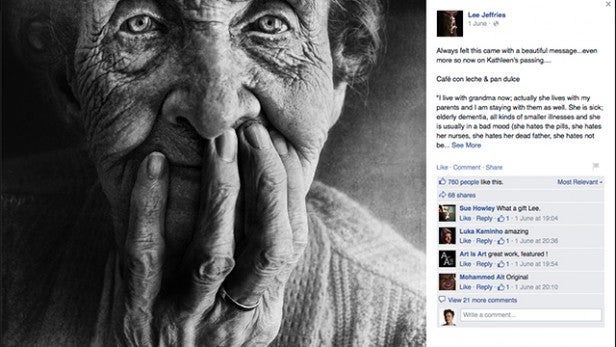 3. Lee Jeffries
There’s no shortage of channels across which you can follow Lee Jeffries – he’s active on Facebook, Flickr, Twitter and Instagram. Indeed, you may recognise his close, intimate, detailed portraits of homeless people, for which he has garnered a deserved abundance of attention, including a profile at TIME Lightbox.

Lee’s self-funded passion project of using his camera to shed light on the plight of the homeless has gone from strength to strength, picking up awards from magazines such as Digital Camera and Amateur Photographer, along with appearing in national newspapers from The Independent to The Guardian. Lee also uses income from the project to support homeless charities, such as the UK’s Shelter.

Lee’s possibly most prolific on Facebook, where you get to see not only his incredible images but also some insight into their stories, as well as behind-the-scenes glimpses of Lee setting up gallery spaces. 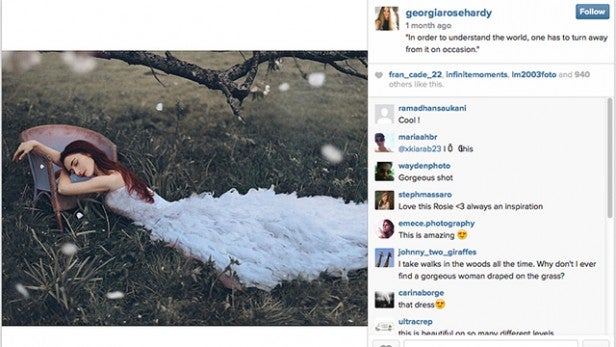 4. Rosie Hardy
Rosie Hardy is a fashion, portrait and editorial photographer who has made her surreal and stylish brand of photography a huge success. She’s an expert at photo manipulation and has an eye for creative, magical scenes. Her flourishing talent has seen her booking high-profile clients in the music world, such as Maroon 5 and The 1975.

She’s also engaged in a 365 Days project, which involves taking a self-portrait every day for a year. These aren’t just selfie-stick snaps however, but full-on staged conceptual pieces with a fantastical feel. You can see a selection in the album on her Flickr gallery, the shots ranging from soulful to silly, elaborate to simple.

You can follow Rosie on Instagram, which is full of snaps from her various travels and adventures, or on Flickr, where she posts more of her professional work including finished images from her shoots. She’s on Twitter too, though isn’t a frequent Tweeter. 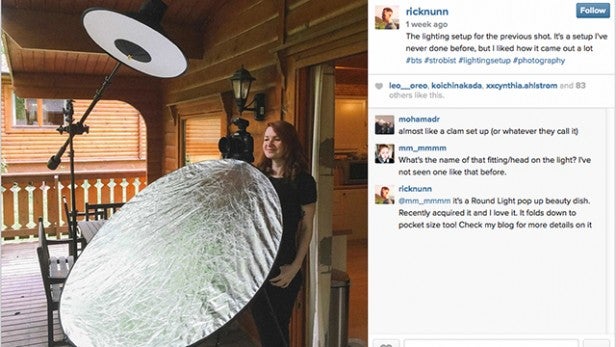 5. Rick Nunn
“I design stuff and take photos,” states Rick Nunn in his Twitter bio. A designer by trade, Rick picked up his first ‘real’ camera in 2009 and since then has become a portraiture virtuoso, creating stylish shoots that make liberal use of off-camera flash.

If you’re the sort who likes to see how images were constructed then you definitely want to give Rick a follow, as he’s partial to sharing the occasional strobist setup diagram on his blog, showing exactly how his images were created and the lights that were involved. If you’ve never really found much use for flash in your own photography then Rick’s work could prove an inspiration, really showing what a staggering difference a good lighting setup can make.

Rick has a talent for photo stories that turn the ordinary into something special – check out one of his latest blog posts, chronicling a simple trip to Edinburgh with a series of gorgeous images (if the shots of breakfast don’t make you hungry there’s something wrong with you). 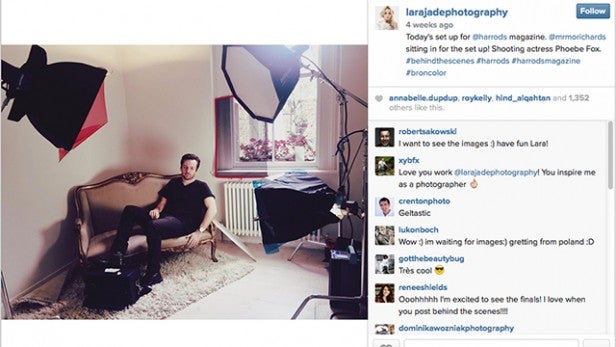 6. Lara Jade
Young photographer Lara Jade is where you need to go to get your fashion-photography fix. She’s built up huge followings on Instagram and Twitter with her effortlessly cool images, and has garnered a roster of high-profile clients off the back of it.

Though she now lives in New York City and jets all over the world, Lara is Staffordshire-born and started her career in London. She enjoys creating cinematic images with echoes of narrative in them, and is another photographer who graciously provides glimpses of the setups behind the scenes of her shoots.

Lara also keeps a blog updated on her website, and it’s worth keeping up with as there’s lots more behind-the-scenes stuff giving you a flavour of what it’s like to be on a glamorous fashion shoot. 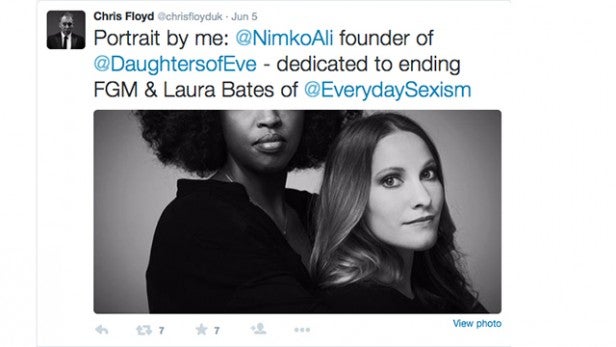 7. Chris Floyd
A photographer and filmmaker, Chris Floyd’s portraiture has appeared in some of the world’s most prestigious and notable publications, from The New Yorker to The Sunday Times Magazine. Take a scroll through the front page of his website and recognisable faces will jump out at you – Game of Thrones actress Sophie Turner, tennis star Andy Murray, presenter and columnist Charlie Brooker, just to name a few.

Chris has been an enthusiastic Twitter user for years now, so much so that he embarked on a photography project called One-Hundred and Forty Characters, for which he photographed 140 of the friends he had made on the social network. He’s a superb follow: not only do you get glimpses behind the scenes of his shoots with the stars, but he’s also never short of an opinion, a wisecrack, an anecdote, or a quality retweet. 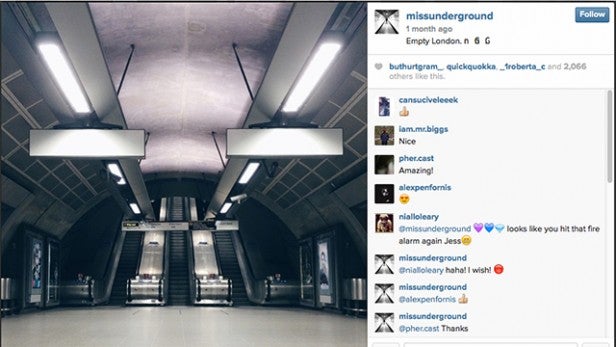 8. Miss Underground
If you’re looking for something more down-to-earth, why not try Miss Underground? The theme of her Instagram is clean and simple: shots of various parts of the London Underground, almost always when it’s empty. A short tunnel connecting one platform to another; a set of escalators leading up to the street; a dusty and dirty staircase: the subjects themselves may sound unassuming, but when they are stripped of the bustle of commuters for which the Underground is infamous it is possible to appreciate the shapes and lines that Miss Underground (real name: Jess MacDonald) is so good at capturing.

Miss Underground captures all her images on an iPhone 5s: proof (if proof were needed) that being able to compose, wait and pick your moment will always trump having the most expensive or sophisticated camera. 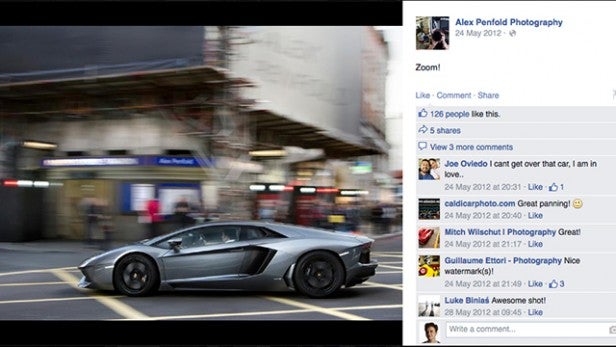 9. Alex Penfold
Get your automotive fix with the massively followed car photographer Alex Penfold. More than 245,000 people on Instagram get his car shots delivered into their feeds, and even people with no interest in cars will have to admit that Alex makes them look damn cool.

Native Londoners may also have fun spotting the locations for Alex’s shots, as many have been taken in and around the capital. Alex is on Flickr too, where he’s uploaded thousands of his images for people to binge on, and he has an active Facebook presence that’s regularly updated. Take a look through his Facebook albums for some amazing techniques. 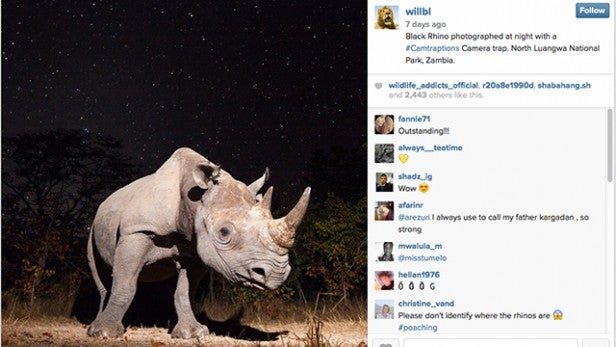 10. Will Burrard-Lucas
Wildlife photographer, entrepreneur, camera-trap expert – Will Burrard-Lucas has no shortage of qualifications. You can follow his Instagram feed to see his wonderful shots from the African savannah, find him on Twitter to learn more about conservation and animal endangerment issues, or head over to his YouTube channel where he posts video diaries, tutorials, time lapses and more.

It’s easy to lose hours of your time scrolling through Will’s Instagram feed – his camera-trap shots of wild animals up close are simply sublime. From brown bears in Finland to elephants in Zambia, it seems as though there can’t be many animals on the planet that haven’t passed in front of his lens. Even if wildlife photography isn’t your bag, you’ll fall in love with his images.