The Battlefield franchise practically cries out for YouTube clips. Given the size, scope and – thanks to the Levolution (we hate that word) mechanic, the series’ multiplayer is essentially a mini-sandbox shooter where players are free to go hog-wild.

In terms of coming up with eye-popping feats, you’re only challenged by your lack of imagination in Battlefield’s online fragfest.

Battlefield Hardline is no different. The game has only been out for the better part of a week and already players are posting clips that are equal parts heroism, comedy and jaw-to-the-floor action.

Here are some of our favourites – and just so you know up front, these are all NSFW. You will need headphones. 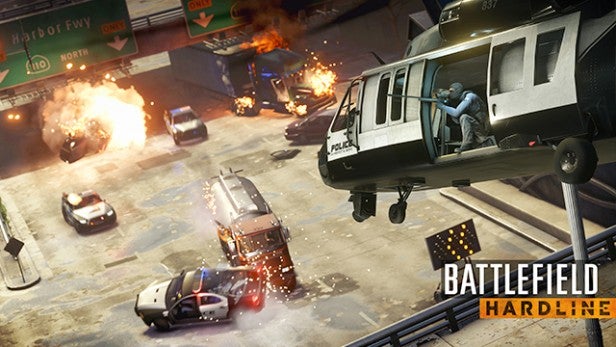 1) Helicopter in your face!

This clip has been tagged ‘The Best Action Movie Clip From Hardline’. It’s not. Not by a long-shot. And quite frankly we had misgivings over including it because it’s quite clearly link-bait. That having been said, when was the last time you took out and enemy by flying a helicopter into their face?

How much do you rate your ability to cap enemies from a moving vehicle? However good you think you are, feast your eyes on the below clip where a player on the back of a bike takes out myriad foes with only one or two shots.

There’s a fair bit of stunt play to wade through too, but we have to doff our cap to this shooter – they seem to have the reflexes of a hummingbird…. If hummingbirds were into the idea of headshots, that is.

3) Shot to the Crown Jewels

“Battlefield Hardline Nut Sack Shot”. Yes. Read that sentence again. Tell us you wouldn’t click on a link that had that as its description. We did. Don’t judge. You’ll do it too.

So what’s more fun than playing Battlefield Hardline’s online multiplayer? How about playing it with a Velociraptor head on your avatar? Or a wolf head?  Hey, it’s easier to tell your teammates apart that way. The modding continues…

The foul-mouthed lads on the I AM WILDCAT channel aren’t too concerned with racking up kills. They aren’t bothered with pwnage, objectives or even match wins. No, they’re more into the idea of planting bombs on one another’s bikes and then hurling each other from one end of the map to the other. Admittedly, in a 13 minute clip, this doesn’t get old – especially when they find the drivable couch. We have to wonder what the hell their opponents made of the whole thing though…

Over on Ponylion HD’s channel they’ve taken explosive vehicle propulsion to the next level. Rather than mindlessly flinging one another across the map, they’ve opted for using explosives as a way to get their vehicles up to areas in the map that they traditionally couldn’t get to – such as the top of a skyscraper. Shot from the inside of the cab of a car, this video makes it look as though Battlefield: Hardline contains a flying spinner from Blade Runner. Worth a look? You betcha!

If you find the drivable couch, you don’t necessarily have the edge on your opponents – especially if you happen to be sharing map space with a sniper as lethal as Mr Benchy. Here, he shows in slow motion exactly what happens in Battlefield Hardline if you tool about in the Easter Egg transit and you don’t bother to watch you back. No swearing. Lots of viscera. Yummy!  (On a side note, it’s worth watching him pot a pilot at long range with his sniper rifle right here)

Base jumping, ramping, rag-doll effects, sending a bike into orbit, riding on top of a helicopter, ramming an enemy with two cop cars – Funtage has it all and then some. Our favourite move comes around 30 seconds in where an explosion sends one of the players so high up into the sky, he gets a panoramic view of Downtown Los Angeles. He then lands in front of a bus after falling for a about a minute. Seriously.

Sometimes the best moments in Battlefield Hardline have nothing to do with creativity or ingenuity; they are moments of mis-timing and just general suckage. With that in mind, check out this clip from Teo in which teamwork and talent are obviously assets other teams have. The guys in this clip try to pull off a couple of traps – such as luring two players driving a car into a field of semtex under a bridge – and they fail miserably every time. For our money, the ultimate low point comes when one of them manages to respawn in the map in the path of an oncoming rocket. Well done!