These two machines take different approaches to their specification. MSI’s cheaper model comes fully kitted out with components, while the Asus VivoMini arrives in barebones form – so you get a processor and a wireless chip, but the storage and memory needs to be found elsewhere.

MSI’s machine is powered by an Intel Celeron 1037U processor. It’s a low-end part with two cores, no Hyper-Threading and no Turbo Boost, and it’s clocked to a middling 1.8GHz. Elsewhere, it’s got 4GB of RAM and a 500GB hard disk – a drive that’s capacious but lacks speed.

The Asus machine’s higher price and barebone design mean there’s room in the budget for a better processor. Intel’s Core i3-4030U uses the Haswell architecture, so it’s a generation ahead of the Ivy Bridge silicon used by MSI, and its 1.9GHz stock speed is 100MHz higher than the Celeron. It’s got more L3 cache, and a better graphics core too.

The VivoMini’s performance will be affected by the memory and storage installed. Our sample was supplied with 8GB of low-power DDR3 RAM and a 60GB Kingston SSDNow mSATA drive.

The gap was even larger in games tests. The VivoMini’s HD Graphics 4400 core ambled to a result of 41,988 in 3D Mark’s Ice Storm test, which is far better than the MSI – it only managed a score of 19,785. It’s not enough to handle new, high-end games, but the VivoMini will be able to cope with modest titles and old classics – something the MSI will barely be able to handle. 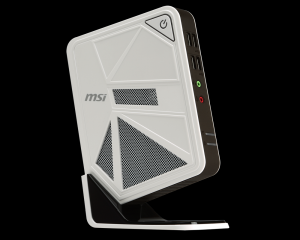 There’s a big difference in storage, too. The 500GB hard disk in the MSI machine returned sequential read and write scores of 85MB/s and 65MB/s – slow, even by the standards of mobile hard disks. The Kingston SSD in the Asus was much faster, with results of 318MB/s and 145MB/s in the same test.

The VivoMini’s faster, newer processor and SSD-based storage made it much more responsive throughout. Application loading times were noticeably faster, and switches between Windows 8.1’s Start screen and Desktop were handled without delay. It’s a far cry from the MSI, which was consistently sluggish. Both machines will get the job done but if you’re looking for the snappy response you’d expect of a modern PC, the VivoMini is the clear choice unless you upgrade to an SSD on the Wind Box. 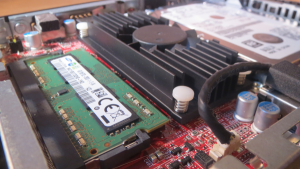 Neither of these systems pushed the envelope when it came to thermal performance – that’s what we expected, given their low-end specifications.

The VivoMini was the more impressive machine. Its processor temperature bottomed out at 47 degrees and didn’t go beyond 77 degrees, and its idle power draw sat at a minute 7W, with this figure rising to a modest 43W at full load.

The MSI’s low-end processor didn’t give us any thermal headaches, but its power consumption was mixed. The older processor and power-hungry hard disk meant the MSI drew 15W from the mains when idling, but this figure only rose to 26W when the components were stress-tested.

Neither machine proved noisy: at idle, both were virtually silent, and both produced a discreet, high-pitched fan noise when running tougher software. It’s nothing to worry about – modest music or the background noise of even a quiet office will drown them both out.