Home automation is something that most normal people don’t consider a realistic buy. It’s for people with dedicated cinema rooms, “spare” BMWs tucked away in air conditioned garages and third holiday homes for when their first and second ones become a bit tiresome. But not anymore. MK Electric’s Astral system starts at just a few hundred pounds, and lets you control your lighting from wherever you are using your smartphone.

It all seems eerily easy to setup too. The most basic Astral system consists of just two bits – a faceplate that replaces your standard light switch backbox and a Smart Interface box that plugs into your router. They cost around a hundred pounds each, and a DIY-savvy individual with a half-stocked toolbox can do all the installing without “getting a man in”. Many other home automation systems demand you tear up the walls, as well as requiring a big fat cash outlay. 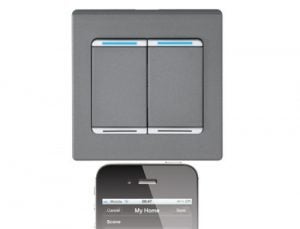 How does it work? The Smart Interface box connects to your home Wi-Fi, letting it talk to an iPhone, and it links with the Astral light switch over a system known as Z-wave. This is an RF-based system, letting it work through walls – naturally, a must-have in a house. Once you add more light switches into the system, each will talk to the other, extending the range of Astral.

It’s able to do this because while the exterior look of the switches suggests it’s just, well, a switch, it also houses the Astral system’s brains. This constant communication is one of Astral’s USPs, and it is what lets the iPhone app work so well. 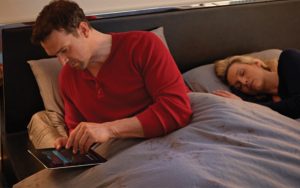 If multiple people are using the iPhone app, any changes to the lighting made on one phone will pretty-much-instantly be reflected in the display of the other. Most common lighting types are catered for too – simple two gang switches, dimmers and those running directly off a plug socket. There’s even a battery-powered one you can stick to walls, should your current  fittings not be in quite the perfect spot.

The more involved you get with MK Astral, the more it’ll cost, of course, but the scope is pretty neat. You can set “scenes”, altering the state of up to 60 light fittings with the press of a button. And while the app we saw running on an iPad was actually just a blown-up iPhone version, it looked simple to use. An Android version is also planned, and a dedicated remote is available – although that doesn’t seem nearly gadgety enough to us. 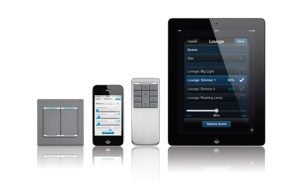 Best of all, you don’t need to be on the same Wi-Fi network to use the system either. Once fully setup, you’ll be able to get access to your home’s lighting wherever you are, as long as you’re connected to the web. Due to the 2-way cleverness going on, you can check if you’ve left a light on in the toilet too.

We’ve been given a set to try out, so as long as we don’t electrocute ourselves in the process, we’ll be back soon with more impressions.