A look back at some of things we miss least about the wonder that was the VCR player.

These days it seems every day is a new national celebration of something. Today’s arbitrary event is National VCR Day and we at TrustedReviews are very excited for this important observance.

Many of our younger readers will be confused by the whole VCR/VHS thing. Just what is this archaic technology?

Well, there are two explanations. Nationaldaycalendar.com describes the erstwhile tech as “an electro-mechanical device that records analog audio and analog video from television on a removable, magnetic tape videocassette”.

But it’s probably better explained as the way in which most of us experienced Disney films for the first time, recorded our favourite shows, and witnessed classic movie moments – all in grainy, analogue form.

Despite its lasting charm, there are certainly some things we don’t miss about VHS tapes and the VCR players which used to sit under all our massive CRT TVs. Here’s a few things we’re glad have been consigned to history.

1) You only had one job, recording timer!

Way before Netflix, in a pre-Sky era, people practised the art of recording stuff from the TV onto video tapes. When you managed to record an entire season of a show, especially when you’d also cut all the adverts out, it was a triumph the likes of which few millennials will ever know.

And most players came with a handy timer, allowing you to capture shows and films while you were out or asleep. But when our video players betrayed us, and that timer didn’t do its only damn job, it cut deep. 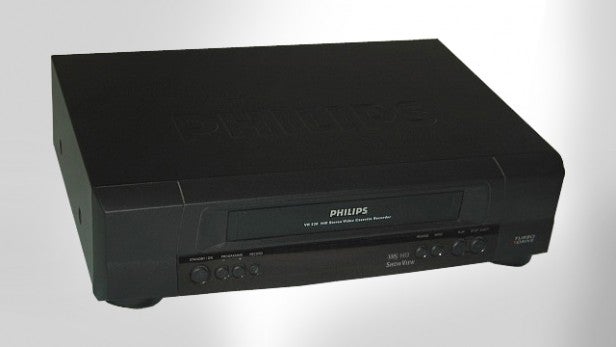 That moment of abject horror when a 10-year-old version of yourself went to watch what you thought was going to be a successfully recorded episode of The Fresh Prince only to be confronted with some insipid late-night news discussion show. Who among us hasn’t sat slouched teary-eyed on the living room floor, staring into Jeremy Paxman’s smug, grainy visage and swearing revenge would one day be ours?

Or what about when you didn’t set the timer for long enough and that film you recorded off BBC Two suddenly ended –  giving way to an advert from whatever random show you’d previously committed to tape? That jarring moment as Die Hard draws to a close, and John McClane prepares to dispatch Hans Gruber, only to be interrupted by Harry Enfield and Paul Whitehouse flogging Hula Hoops.

It was all too familiar a situation for many an early-90s kid.

‘What the hell was that?’ A phrase familiar to anyone who’s ever heard the crunch that accompanies the chewing up of a VHS tape. Was there ever a more soul-crushing sound?

This would happen when one of the two spools within the cassette itself started rotating slower than the other, causing the tape to build up and eventually get chewed into an unwatchable mess. 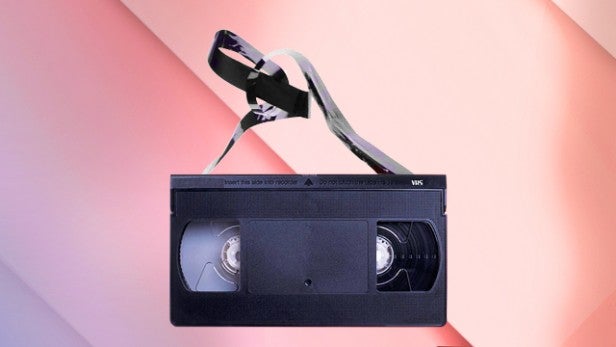 Of course, many of us tried to salvage precious recordings by physically winding the spools ourselves until the tape went taut again. Inevitably, this would result in an unwatchable portion of the film, where the scene would transform into a nightmare landscape, as characters faces became distorted and the soundtrack started to sound like it was recorded in an as-yet unexplored portion of the ocean floor.

Things have changed since then. Once the DVD and Blu-ray era arrived, we had to worry about scratched discs instead of chewed tapes. And these days all we have to worry about is a decent Wi-Fi connection. That and the threat of another Netflix-Adam Sandler collaboration hitting the streaming queue.

Years ago, it was customary for owners of a video tape to rewind the spools of their cassette after viewing a particular film, so that the next time they, or another, came to view it, the tape would be in a fit condition for immediate viewing. 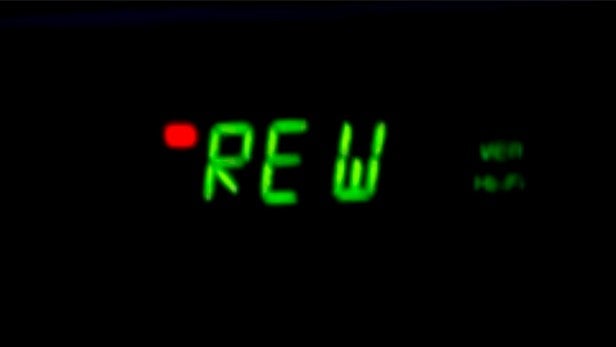 Aside from rewinding being a major pain, the problem was perhaps worst when it came to renting video tapes (that was also a thing once upon a time). There was always some heartless bastard that returned the cassettes to Blockbuster without rewinding them, making it a genuine blessing when some kind Samaritan actually heeded the advice of Jack Black and Mos Def to ‘Be Kind Rewind’.

These days such a phrase would be meaningless to the average kid, but for many, it was a guiding principle only the most wretched soul would dare deviate from.

Rewinding’s ugly cousin, this innovative technology actually allowed you to move forward in time at an accelerated rate. Not too accelerated though. Way before the concept of chapters was introduced with the DVD, fast-forwarding was the only way to skip ahead on a video tape.

Some players came with different options to up the speed of the ‘fast-forward’, but for the most part, it was a painfully crude way of finding where one of your favourite recorded episodes started on a particular tape.

Related: UHD Blu-ray – All you need to know 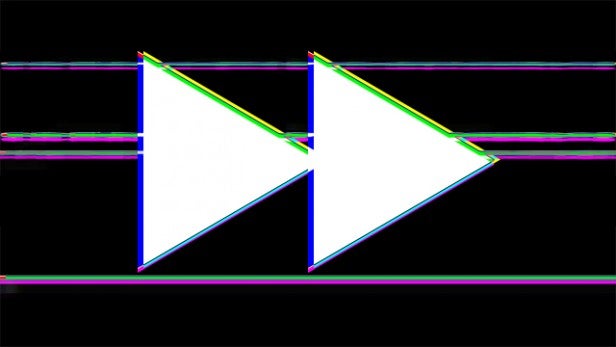 What’s more, fast-forwarding was often the quickest way to scramble the tape inside. Once those spools got up to speed, there was always the possibility that you were going to hear that awful tape crunching sound. In that moment, when our trusted fast-forward ruined our childhood copy of Arisocats, and our parents desperately pulled reams of mangled tape from the machine in a vain attempt to save our cherished film, we knew true betrayal for the first time.

These days, watching something is a mercifully easy process. Whether you’re streaming or watching a Blu-ray, it’s just a case of picking what you want and pointing your eyes at the screen.

But there was a time, believe it or not, when your technology would demand a full calibration effort before it could be viewed properly. Yes, VCR players came with something called tracking, and woe betide anyone who hadn’t adjusted theirs properly.

There’s a very long-winded and boring explanation as to what tracking is, which we’ll skip for now in favour of saying it had something to do with lining up the speed the video should be played at with the ‘scan speed’ of the player. Told you it was boring.

Adjusting the tracking usually meant messing with a button hidden behind some sort of secret panel on the front of the VCR itself. Needless to say, older tapes would often require some tracking calibration in order to rid the screen of those dreaded fuzzy white lines.

Today, having to deal with such issues would flummox most Netflixers. But there are still those of us who remain haunted by the grim spectre of tracking problems. You did look like a VHS boss in front of your family when you managed to fix the tracking, though.

OK, we’ll admit we actually kind of miss this one. It was all part of building your own library of carefully curated shows and films. Once a tape had been finished, the final pièce de résistance was a meticulously written label, which could adorn either the front or the side of the cassette itself.

One thing that remains a mystery to us though, is the inexplicable complexity of the labels themselves. Makers of blank video tapes would provide you with a sheet of utter nonsense for use with their product, which would include lines of seemingly random reference numbers, grids of varying sizes, and tick boxes for things which could have been entirely made up by whatever company churned out these bewildering sheets of incoherence. 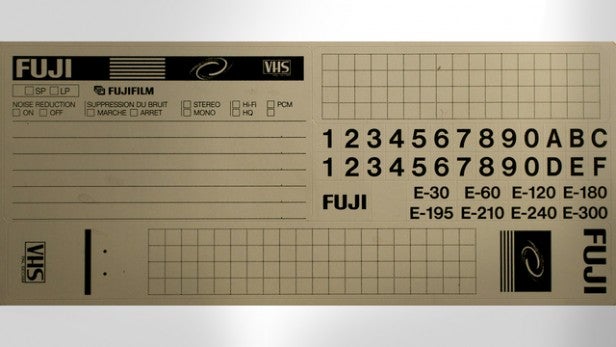 We’re pretty sure no one ever used the codes printed on these things properly. Most of these labels just ended up having the name of a random TV show scrawled on them in black marker.

Similarly indecipherable were the adverts for video tapes. If you can figure out what’s going on here, we applaud you:

Also, this advert is a pack of filthy lies with its claim that ‘once you’ve got it on Scotch, you’ve got it for life’, as we will demonstrate in this next section.

Similar to when the recording timer let us down, discovering a family member had taped over one of your favourite recordings was that much more painful for the fact it was your own flesh and blood that had betrayed you. We were preserving the entire first two seasons of Kenan & Kel for posterity, Dad – no one cares about you recording the football.

The final insult was if the offending family member had taken a pen to your carefully designed label, writing the title of whatever crap they’d decided was more important over the top of your own writing.

Nowadays, it’s hard to imagine an equivalent. Perhaps if someone uses your Netflix account and adds a load of terrible shows to your watch list? But even then, the damage can be undone. No such thing could be said for our lost recordings – so spare a thought for them on this National VCR Day.

VIDEO: Trusted Explains – All you need to know about TVs

Got any other VHS recollections? Let us know about them in the comments.