Dying Light, Saints Row 4 and Call Of Duty are all out to prove you have more money than sense

The video games industry makes a lot of money. A lot of money. At the time of this writing its earnings dwarf that of pretty much every other entertainment industry on the face of the earth. While this doesn’t mean that video games – or the people who make them – are recession-proof, what it does mean is that there’s an awful lot of money splashed around in this industry in the name of promotion.

Over the past few years, games publishers have thrown conventions, paid for red carpet premiers and – in the case of Microsoft – even rented a country to promote their wares. They’ve also pumped money into Special Edition releases of games, aimed at the most brutally hardcore – or, in some cases, the most stupid – gamers. What follows is a list of largesse – the most ridiculously expensive Special Editions ever created.

We sincerely hope you don’t own them. And if you do, we hope your mortgage is paid up. Or that you have a trust fund. Or that you didn’t sell a kidney.

The Call Of Duty shooter series has always had a ‘submit-or-die’ charisma to its PR. This, after all, was the first video game franchise to organise its own red carpet premier in Leicester Square. The first gaming franchise to take over the Battersea Power Station and rope in a bunch of international footballers for a multiplayer demonstration. The first video game series to hold a convention in the gigantic hangar Howard Hughes built his transatlantic white elephant, The Spruce Goose, in – and we’re sure that the fact it was just down the road from EA’s LA HQ was probably just a coincidence.

So it’s not really surprising that a COD special edition arrived supersized. Going one further than the Call Of Duty: Modern Warfare 2 Special Edition – which actually included a set of infrared night goggles – the COD: BO2 Care Package Edition included a steelbook case, the musical score, a couple of accoutrements for your gaming avatar and some multiplayer maps.

It also contained a remote controlled drone, in case your neighbours weren’t paranoid enough. And all of this came in a case designed to look like the care package that players flip open in the multiplayer fragfest. All of it, for the low, low price of £150. And no, there wasn’t a pamphlet included on where best to store it in your house. 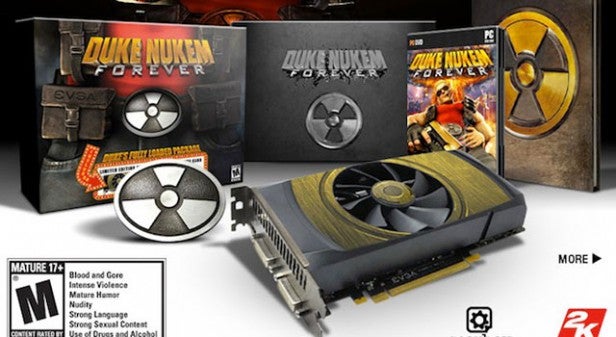 Duke Nukem Forever was a game most players thought they’d never see. It had been in development for roughly the same time it would take a human being to hit puberty. Once it was released, most of the people who bought it were of the opinion it would have been better off if it had died on the table. Duke Nukem Forever was a mess; long loading times, erratic difficulty and uninspired toilet humour sank the Duke on launch. The only thing harsher than the game’s lousy sales were the reviews that filtered in; we’re told some people caught fire upon reading them.

The negativity surrounding the game didn’t stop 2K and Gearbox from going all out to sell it, however. Aside from Gearbox head honcho Randy Pitchford staying on point about it – “we know the game’s great,” he told one publication – 2K gave Duke Nukem Forever the star special edition treatment.

Alongside the Balls Of Steel Edition, which came packaged with dice and a statue of the Duke and the King Edition, which arrived with bubblegum, 2K also kicked out the Fully Loaded Edition. This arrived with a EVGA Ge Force 560 GTX graphics card, an art book (because, why not?) a mouse pad and a beltbuckle you could use to advertise the fact that you’d handed over the most amount of money for one of the lousiest games on the last generation – that’s £250 too. 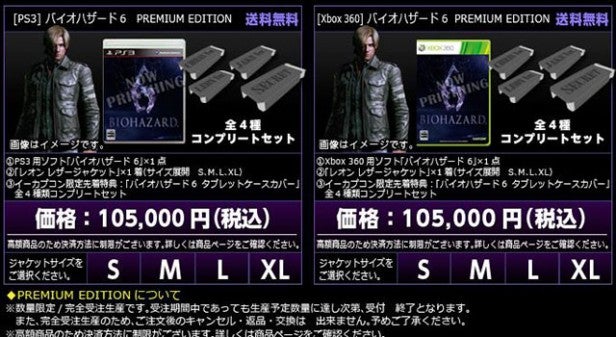 Still, the mixed reviews didn’t stop Capcom from plonking a stupidly expensive Premium Edition of the game on the selling stump. For around 900 quid, Resi Evil fans got a copy of the game, some stickers, some tablet capsules (presumably for the valium required after you realised what you’d paid nearly a grand for –ed.) and a replica of Leon Kennedy’s admittedly cool-looking leather jacket made out of genuine cowhide. Now, we’re not saying that it isn’t a sweet jacket. But would you pay 900 quid for it? Even if it came with a free copy of the game? Really? Really??!! 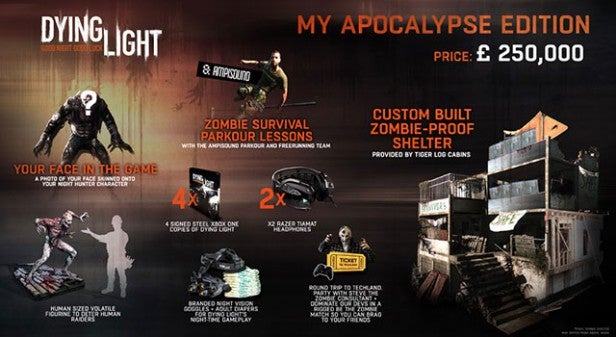 Do you have a quarter of a million quid lying about your house? If so, think of the things you could purchase with it. You could buy a house outside London. You could buy half a house in Zone 3. You could even put a deposit down on a flat in Highbury & Islington. Hell, you could buy a car. Live for a few years off the interest. You could take a gap year out and see the world.

But why bother with any of that when you could buy a video game that features zombies and parkour? Zombies! And Parkour! That’s got to be worth a quarter of a million quid, right?

Well, maybe not – but that’s why the lovely people at Techland have added a ton of extras to their Dying Light: My Apocalypse Edition, including your very own zombie-proofed house! Yes, you can have a dilapidated stand-to complete with a human-sized zombie figurine to deter human raiders (who will never come) and parkour lessons to evade the undead (who you’ll never meet). On top of that you get a steel bookcase containing the game, some decent headphones and a trip to meet Techland – you know, the guys who violated your bank account and made you into one of the world’s foremost numpties. Well done! 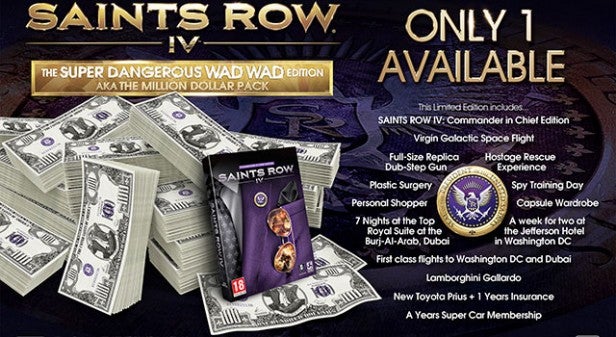 When it comes to special edition largesse, Saints Row 4’s Wad Wad Edition has the competition beat hands down. Forget your own house, statues, collector cases and leather jackets. How about your own Lamborghini Gallardo? And a night in a 5-star hotel in Dubai? And a personal shopper? And a capsule wardrobe? And some plastic surgery? And a hostage experience? And a Virgin Galactic Space Flight?

Yes, all of this can be yours – along with a copy of Volition’s barmy open-world GTA/Mass Effect/The Matrix hybrid – for a cool million dollars. Yes, you read that right. For $1,000,000 you get all of this and a bit more – including first-class flights to both Dubai and Washington DC – as well as the bragging rights (if you can call them that) that you, yes you, spent more on a game than any other player in the history of gaming.