Microsoft’s Windows OS is 30 years old today. It’s no exaggeration to call it the biggest family of software releases ever, so we thought we’d pay tribute.

It was on November 20, 1985 that Bill Gates – who had only just turned 30 himself – led the launch of Windows 1.0 into a skeptical marketplace.

For the next three decades, successive versions of Windows would go on to become the most popular PC operating system in the world, attaining ubiquity in home and business computing alike.

To mark the occasion of the thirtieth birthday of Windows, we thought we’d pick out 30 interesting facts, videos, and snippets concerning the iconic OS.

Some are informative, some are amusing, and some are just plain bizarre – which seems to be in keeping with the rollercoaster ride Microsoft’s OS has had us all on over the past three decades.

The very first version of Windows was hardly an original product. It came about after Bill Gates saw a demonstration of VisiCorp’s Visi On GUI at Comdex 1982, and decided to create his own take on it.

The source and level of Microsoft’s inspiration for Windows would continue to be hotly debated over the coming decades. 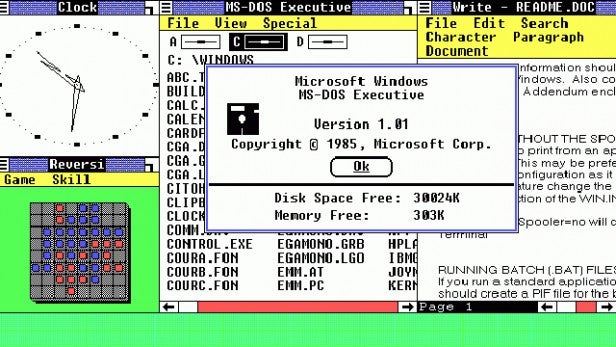 Windows is a pretty iconic name, but it was almost so very different. Bill Gates initially wanted to call his pretty new OS ‘Interface Manager’ – a reflection of the fact that it was essentially a fancy skin for DOS – but was talked around by a Microsoft employee.

Microsoft’s early OS work wasn’t the run-away success you might have expected. In fact, it was a bit of a flop.

Windows 1.0 was announced in November 1983, but it would take a further two years to see release. When it did arrive, it was largely panned by critics who saw it as feature-light, sluggish, and largely pointless.

Even the very windows concept that gave the OS its name was botched, as Windows 1.0 couldn’t stack and layer windows like Apple’s successful Mac OS – which beat it to market by almost two years.

Related: Windows 10 vs Windows 7: Is it time to upgrade?

Atari ST could have been an early Windows machine

Cult home computer the Atari ST could easily have ended up with Windows 1.0 as its OS. Microsoft actually approached Atari to suggest a port, but Atari opted to go with Digital Research’s GEM instead.

Windows 2.0 launched in 1988 with a number of features that were familiar to Macintosh users, including those overlapping windows.

The result: a legal challenge from Apple that stretched on a number of years, through successive versions of Windows. The US Federal District Court eventually ruled in Microsoft’s favour in 1992, with the whole GUI approach by then seen as a natural and inevitable design approach rather than a tangible case of theft. 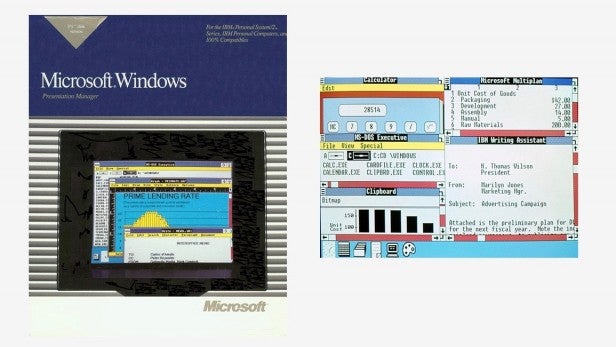 An early glimpse of crazy Ballmer

Remember Microsoft’s last CEO, Steve Ballmer? Of course you do. He was the large, slightly unhinged chap who had the tendency of squeaking, dancing, and crying to show how much he loved his company.

This OTT character wasn’t put on, and it certainly wasn’t a modern phenomenon. Just check out this TV ad for Windows 1.0, shot some two decades before Ballmer took his eye off the ball as Microsoft CEO and allowed Google and Apple to set the current smartphone agenda.

Windows 95 was arguably the defining Windows release, but it was the release of Windows 3.0 in 1990 that really saw Microsoft getting into its stride.

It was here that Windows started looking like the the OS we all think of today, thanks to advanced graphics (16 whole colours), more detailed icons, and now-familiar tools like Program Manager and File Manager.

More importantly, Windows 3.0 saw the the bundling in of Solitaire, Hearts, and Minesweeper, leading to millions of hours of wasted office time. 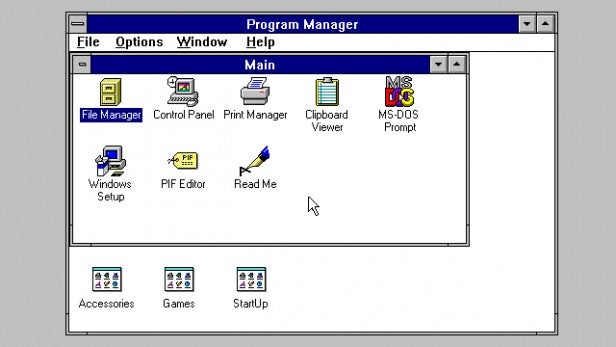 It’s easy to forget just how dominant Windows once was. At its peak, around the time of Windows XP in the early noughts, Windows accounted for over 90 percent of the total OS market.

While recent years have seen the emergence of smartphone computing, which means that Android is now the most widely used OS, Windows continues to rule the desktop and laptop roost.
Despite the steady growth of Apple’s Mac OS X, Microsoft’s various Windows versions still account for more than 86 percent of the desktop OS market as of October 2015 (according to StatCounter).

Windows 7 continues to be the most widely used version of Windows with a little over 50 percent of the desktop OS market. While the latest version, Windows 10, ‘only’ has 9 percent, that’s still roughly the same as OS X.

Ballmer and Gates at Widows 95 launch

Want to see a bunch of nerdy middle-aged men getting on down to Start Me Up by The Rolling Stones during the Windows 95 launch? You do. Trust us, you do.

Start me up, indeed

Microsoft’s use of the aforementioned Rolling Stones song was well chosen, because Windows 95 saw the debut of the famous Start button. Years later, PC users around the world would demand the reinstatement of this iconic UI element after Windows 8 omitted it.

Interestingly, early builds of Windows 95 show that the Start button almost turned out to be three distinct buttons before Microsoft wisely opted to simplify. 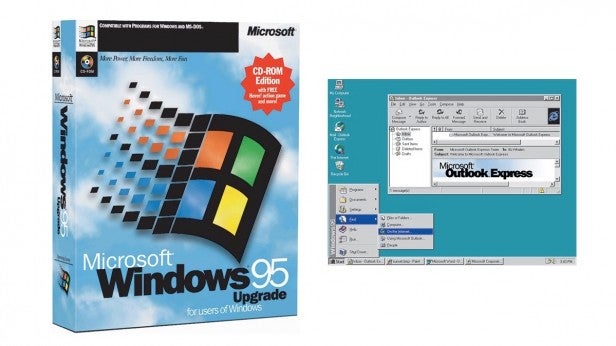 The famous Windows 95 startup tinkle was conceived and recorded by British musician, producer, oblique strategist, and all-round genius Brian Eno.
See, Microsoft can do ‘cool’ too.

Considerably less cool than Brian Eno – though it must have seemed pretty rad at the time – was this cringe-worthy Windows 95 video guide starring Jennifer Aniston and Matthew Perry. That’s Rachel and Chandler from Friends.

Friends was one of the biggest TV shows of the mid-to-late ’90s, and Microsoft tried to harness its quippy style and hijack its cultural cachet with this ‘cyber sitcom.’ Their words, not ours.

If you were one of the three people to see the new Steve Jobs movie, you would know that Steve Jobs triumphantly returned to Apple in 1997 with his NeXTSTEP OS under his arm. It would go on to form the basis of the current OS X.

However, before a floundering Apple turned to its deposed founder, it seriously considered Windows NT as a replacement for the ageing Mac OS. Indeed, it was reported to have been Apple COO Marco Landi’s preferred choice. 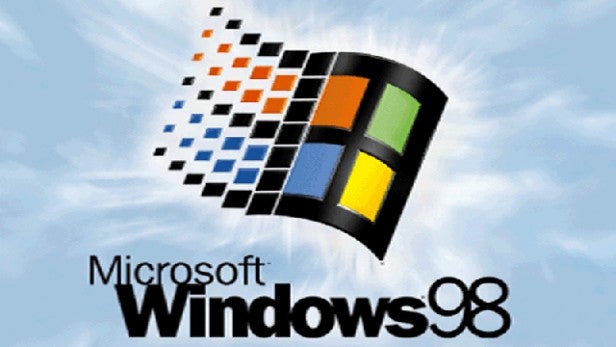 Windows was underpinned by Microsoft’s archaic, text-bsed MS-DOS operating system from Windows 1.0 in 1985 right up to and including Windows 98. It was only from Windows 2000 and (on the home user side) Windows XP onwards that MS-DOS was excised completely.

If you were stumbling upon this video cold, you might think it was depicting some sick experiment whereby a baboon had been shaved, dressed up like a man, and made to listen to Gloria Estefan on loop before a mocking crowd. It is clearly distressed.

Windows XP photo the most viewed of all time

Windows was so big at the turn of the millennium that the stock background photo of Windows XP – a generic landscape picture called Bliss – is thought to be the most-viewed photograph of all time.

It’s impossible to prove, of course, but given Windows XP’s ubiquity and unusual shelf-life (Microsoft only stopped supporting it in 2014), it’s thought that more than a billion people will have seen those rolling hills. 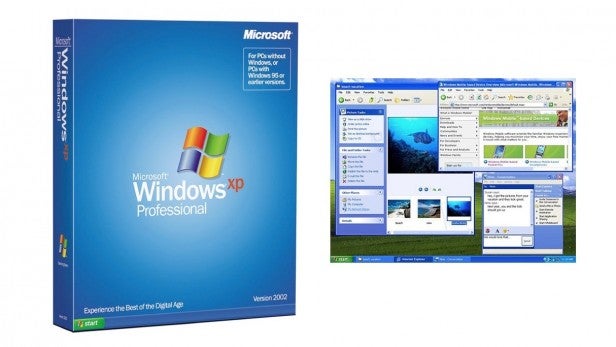 The original launch window for Windows Vista was 2003. It finally saw release in 2007 after having development scrapped and restarted on two occasions.

One of the major features Windows Vista was supposed to have was a revolutionary file system called WinFS. It would have allowed files to be arranged using a relational database, and would have natively recognised different data types like picture, e-mail, document, audio, video, calendar, and contact files. Searching would have been much more powerful and efficient as a result.
Suffice to say, WinFS never made it into the troubled Vista. 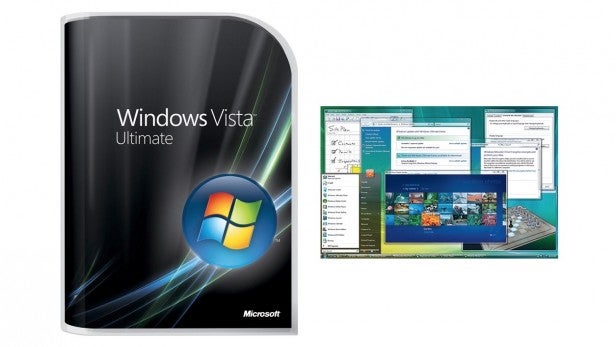 No, we’re not talking about the infamous bloat that afflicted 2007’s Windows Vista. Rather, the title to this factoid refers to Microsoft’s decision to go back to the Eno/Windows 95 approach in getting a legendary British musician to produce the opening jingle.

This time it was ace guitarist Robert Fripp who was given the job of coming up with the tones. Apparently, the resulting sound was made to resemble the pronunciation of ‘Windows Vista.’

Windows 8 not such a flop

It’s widely held that Windows 8 was a flop. And by several measures it was, completely failing to follow Windows 7 in both critical and commercial terms.
However, it’s amazing what a shift in perspective can turn up. For example, consider the fact that Windows 95, which is widely held to be Microsoft’s defining Windows release, sold 40 million copies in its first year.
Windows 8, meanwhile, sold 100 million registries in its first six months.

Remember that dream you had after eating a whole block of Lancashire cheese right before bed time, where Steve Ballmer and Bill Gates danced and jigged in time to Haddaway’s Euro dance-pop classic ‘What is Love?’ Yeah. That wasn’t a dream.

What are your most vivid memories of Windows over the last 30 years? Let us know your thoughts in the comments section below.