How to watch Joshua vs Ruiz — On TV and online

The eyes of the world will be on the Diriyah Arena in Saudi Arabia this Saturday night, when Anthony Joshua attempts to re-claim his IBF, WBA, WBO and IBO titles from Mexico’s Andy Ruiz Jr. Here’s how you can watch Joshua vs Ruiz on TV or online via live stream, wherever you are.

Ruiz caused one of the biggest upsets in the sport’s history when he stopped Joshua in round seven back in June. The crowd at Madison Square Garden were left aghast – as were the millions watching on televisions, laptops and phones all around the world. The Mexican came in as a late replacement after Jarrell Miller tested positive for banned substances and fans and pundits expected a walk-over victory for Joshua. Instead, it was the Watford man who was walked over.

With everything on the line for the re-match, this isn’t a fight to be missed.

Joshua vs Ruiz start time — When does the fight start?

The fight will take place on Saturday December 7, 2019, with the broadcast starting at 5pm GMT. The ring walks for the main event are expected to take place at around 10pm.

How to watch Joshua vs Ruiz on TV — Which UK TV channel is showing Anthony Joshua vs Andy Ruiz Jr?

The fight will be available via Sky Box Office for £24.95, the price having recently been bumped up from the industry standard £20 PPV. 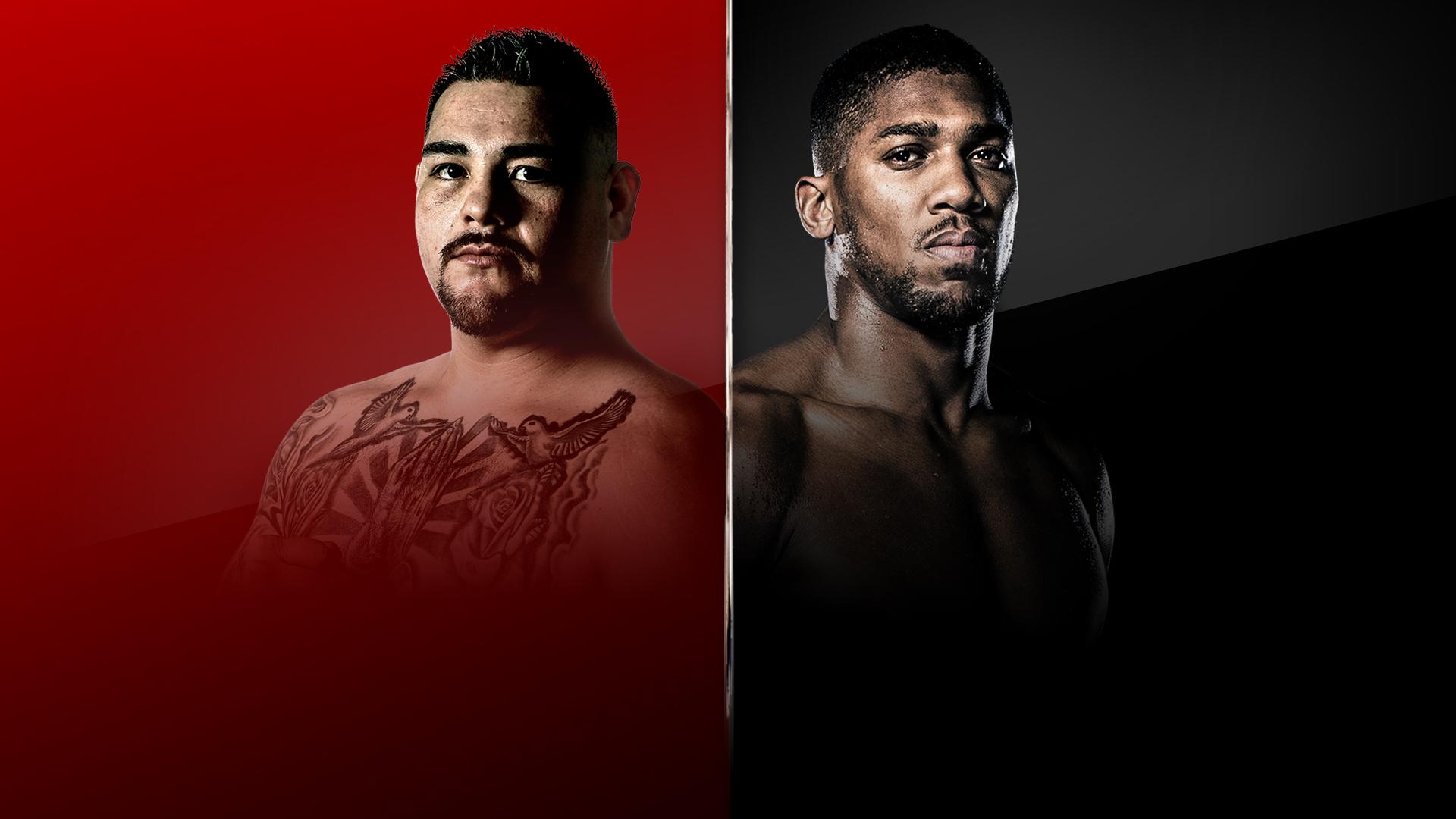 Book now to avoid disappointment. Coverage starts on Sky Sports Box Office at 5pm GMT, with the main event expected at around 10pm.

How to live stream Joshua vs Ruiz online

You can also watch the fight via your Now TV box but you will still have to pay the £24.95 pay-per-view fee.

Book now to avoid disappointment. Now TV viewers can book Joshua vs Ruiz now. Coverage starts at 5pm GMT, with the main fight expected in the ring around 10pm.

US fans will be able to stream the fight via subscription serice DAZN. The platform costs $99.99 per year, or $19.99 per month. The service is also available in Canada, Austria, Germany, Japan, Switzerland and Italy.

For DAZN subscribers, the fight is included in your subscription fee so there is no extra PPV cost.

Joshua vs Ruiz undercard — Which other fights will be broadcast?

The heavyweight division is boxing’s most prestigious, high-stakes division and, as a result, heavyweight matches are more difficult to make and more expensive to make happen. Fans can look forward to a veritable banquet of heavyweight action on Saturday night though.

First up is Azerbaijan’s Mahammadrasul Majidov, going into his second professional fight against Hertfordshire man, Tom Little. The 32-year-old Englishman is very much the outsider in this fight, having lost his last three. While Majidov has little experience in the professional ring, he has quite a few top level amateur trophies under his belt. The fighter has won multiple World Amateur Championship golds and a bronze the London Olympics.

Croatia’s Filip Hrgovic is another flourishing talent. He’s stopped seven of his nine opponents inside the distance and it looks like he’ll do so again when he takes on former Anthony Joshua opponent, Eric Molina. The Texan has a lot of wins under his belt but has failed every time he’s tried to step up to world level.

Another Englishman, Dillian Whyte, is set to take on Polish giant Mariusz Wach. A few years ago this would have been a compelling piece of match-making but now, with Wach at 39-years-old, the Pole’s career seems to have fallen by the way-side. His last good win came in 2017 and there is little to suggest he will trouble Whyte.

The most exciting item on the heavyweight buffet is Alexander Povetkin vs Michael Hunter. The Russian is nearing the end of his career at 40, but remains a top level fighter and a fierce puncher. Last time out he beat Hughie Fury at the O2 and he could be set to dash the hopes of another heavyweight prospect here. Hunter will – no doubt – have other designs. He’s racked up a series of impressive wins at heavyweight since losing to top pound-for-pound contender Oleksandr Usyk at Cruiserweight back in 2017. This one is on a knife edge and could be just as exciting as the main event.

Outside of the heavyweight action Hopey Price takes on Swedi Mohamed in only his second bout.

A slimmer, lighter Joshua will face Andy Ruiz across the ring on Saturday night. He’s replaced the physique that led Tyson Fury to repeatedly ridicule him as “a big stiff body-builder” and now looks better suited to a style with movement and fluidity.

This will be the key to unlocking Ruiz, who knocked Joshua down four times in their first fight before the referee stopped the contest.

The usual physical challenges of heavyweight boxing are now compounded by the psychological demands of a re-match, making this an unmissable fight.

Of course, Joshua has height and reach on his side but he will have to use it more effectively than he did when the two faced-off previously. Maintaining distance with straight punches will be key for the Watford man. Ruiz, on the other hand, will need to use head movement to force Joshua to miss, before closing that range and replying with his own salvos. This was hugely effective in the first bout and it was a left hook fired from fairly close range that did much of the damage in the first fight.

For Joshua, a route to victory would look more like his performance against New Zealander Joseph Parker. He kept his range effectively and maintained discipline throughout, with footwork and a stiff jab keeping Parker at bay. If Joshua sticks to a disciplined game-plan at range, he may well take his titles back on Saturday night but the fight is tough to call. Ruiz has shown he can hurt Joshua and the former champion will be wary as a result.

Whoever you’re supporting, Saturday night’s fight looks like a heavyweight bout for the history books. It’s well worth tuning in.

In the first fight, Andy Ruiz knocked Joshua down four times before the fight was stopped by the referee in round seven.

FAQ: How much did Ruiz make against Joshua? (In the first fight.)

Exact figures vary but it was widely reported that Andy Ruiz earned around $7m for the first fight.

FAQ: How much are Joshua and Ruiz being paid? (This time around.)

Joshua is reportedly making something between £45m-£60m. Ruiz is expected to make around £10m, a career high pay-day for the Mexican.

FAQ: What round did AJ get knocked down?

The first knockdown came in the third round, but was suffered by Andy Ruiz Jr. The Mexican recovered and quickly inflicted a knockdown on his opponent in the same round.

Ruiz knocked Joshua down within a minute of being down himself. He went on to knock Joshua down again in the third round, within 90 seconds.

In round seven, Joshua was knocked down for a third time and then a fourth. The Englishman spat out his gum-shield as he stood waiting to re-start the contest and the referee, Mike Griffin, stopped the fight.