He’s an Oscar-winning actor who survived a fight with a CGI bear, but Indonesia isn’t happy with Leo.

Leonardo DiCaprio could be facing a ban from Indonesia over a photo he posted to Instagram three days ago.

The prolific actor snapped himself holding hands with an orangutan, and captioned the shot with complaints about deforestation in Indonesia.

The star, who was visiting Indonesia on a tourist visa, bemoaned the clearing of the country’s rainforest to “meet demand for palm oil”, threatening the natural habitat of orangutans. 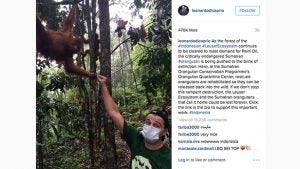 But speaking to the BBC, an Indonesian official revealed that Leo could be blacklisted from Indonesia as a result of his comments online.

“In terms of [his] visa and immigration permit, Leonardo DiCaprio did not do anything wrong: He entered and left Indonesia legally,” said Heru Santoso, a spokesperson for Indonesia’s immigration department, speaking to the BBC. “But, we still investigate.”

“If DiCaprio’s posting in his social media can be categorized as incitement or provocation, we can blacklist him from coming back to Indonesia,” Santoso added.

“As the forest of the Indonesian Leuser Ecosystem continues to be cleared to meet demand for palm oil, the critically endangered Sumatran orangutan is being pushed to the brink of extinction.”

“Here, at the Sumatran Orangutan Conservation Programme’s Orangutan Quarantine Center, rescued orangutans are rehabilitated so they can be released back into the wild,” the Hollywood star continued.

Leo added: “If we don’t stop this rampant destruction, the Leuser Ecosystem and the Sumatran orangutans that call it home could be lost forever.”

What do you think more Hollywood stars should use their fame as a platform to speak about important issues? Let us know in the comments.