Think you’re a TV addict? We’re willing to bet that you’ve got nothing on this guy.

The previous record was 92 hours, but square-eyed Fragoso managed to keep his gaze on the TV for an incredible 94 hours.

What’s more, Tech Insider has footage of the entire marathon, which you can watch here. 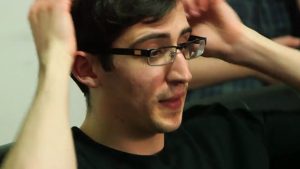 Alejandro Fragoso, deep in the action

Fragoso, of New York, began watching TV on April 8 with three of his friends.

The rules were simple:

You’re not allowed to break eye contact with the TV. You get five minutes of break per hour, which accumulates over time. You cannot engage in “prolonged conversation” i.e. more than a few words.

Fellow viewer Louise Matsakis gave up after 10 hours, which is a valiant effort by anyone’s standards.

Molly Ennis, also attempting to break the record with Fragoso, was disqualified 60 hours in. She broke eye contact with the TV, but we’re still impressed.

Fragoso endured however, and refrained from sleeping for the entire 94 hours. He reported seeing hallucinations and hearing voices, but hey; he’s now a world record holder.

What’s the longest you’ve ever watched TV for? Let us know in the comments.