How to watch The Golden Contract — On TV and online

A tournament format is a huge departure from boxing norms, but it’s one that fans have loved. Back in October the featherweight edition of the tournament saw some top talents face-off at York Hall. Now, it’s the turn of the super lightweights.

For boxing fans, however occasional, the most common complaint about the sport is that ‘the best fighters don’t fight each other’. Well, Sky and MTK’s Golden Contract tournament is an attempt to put that right. It’s well worth tuning in. Here’s how to do so…

The undercard starts at 6pm GMT. The main events (the four quarter-finals of the tournament) start at 8pm GMT.

At 8pm GMT the show will be broadcast live on Sky Sports Action in the UK, and ESPN+ in the US.

How to live stream the Golden Contract

For those of you wanting to watch online or on-the-go, you’ll be able to stream the undercard for free from 6pm GMT, on IFL TV’s YouTube channel.

Then, at 8pm, coverage switches to Sky (in the UK) and ESPN (in the US), so you’ll need to fire up the Sky Go app or access Now TV with a Sky Sports pass.

If you’re out of the UK and unsure if you can access Sky Go where you are, the best way to get around your issues might be through a VPN. We’ve got a guide to the best VPNs to help you out. VPNs encrypt and anonymise your data, and allow you to appear as if you’re in a different country.

Here are three of the best VPNs for streaming:

The winner of the tournament will pick up a two-year, five fight deal. Each of those fights promises an eye-watering six-figure purse. The incentives don’t come much bigger then, but who’s got a chance of winning?

Ohara Davies has to be the favourite. He’s the one of two entrants to have challenged for a world title and combines skills and concussive power in a fan-friendly style. His two losses came at the hands of Jack Catterall and Scottish boxing sensation Josh Taylor. Two losses that certainly don’t carry any shame.

Davies faces budding US talent Logan Yoon in his quarter final bout. It’s not likely to be an easy night’s work. The Hawaiian is unbeaten in 16 and stopped 12 of his opponents. This is the 21-year-old’s first step up though, and none of his previous opponents can hold a candle to Davies’ form.

Davies at his best should be able to make his experience count. He claims he is at his best too, after linking back up with former amateur coach Tony Cesay. 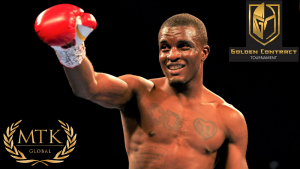 The other featured boxer to have challenged for a world title is southpaw Frenchman, Mohamed Mimoune. He actually held the IBO World Title, but the IBO’s belt isn’t held in the same regard as the WBA belt that Davis fought for.

His opening bout with Darren Surtees is an intriguing one on paper though, Mimoune has only stopped two men in 25 outings, where Surtees is yet to lose and has stopped eight of 12 opponents. Mimoune will have to box clever by the sounds of things.

Just last year Sakyi pulled out an impressive upset victory, overturning Siar Ozgul in their Souther Area Title fight. Ozgul was 14-0 going into the bout. Could he spring another upset here?

McKenna, at 6’1″ is very tall and rangy for a super lightweight. He’ll need to make good use of that to overcome Sakyi. Back in 2018 fans were surprised to see Lewis Benson overcome a height difference and outbox McKenna for large periods, though McKenna was ultimately awarded the decision.

He’s built momentum since that close win though, racking up two more points decisions since. He’ll be favourite going into Friday’s bout but it is a quarter final draw that could go either way.

Aforementioned Scottish super lightweight, Lewis Benson, pulled out at the last minute after the Board of Control returned an unfavourable medical test result. He was quickly replaced by Londoner Jeff Ofori.

Ofori takes on Welsh champion and former amateur star, Kieran Gething, in another interesting match up. Ofori fought just last weekend and pulled out an impressive victory over Gerard Carroll. Momentum is on his side but could this match up come too soon? We’ll see on Friday night. Either way he’s an interesting addition to the lineup.

The dark horse, as far as the opening set of bouts is concerned, could be Darren Surtees. He’s been labelled as a big outsider to beat Mimoune by bookmakers. If he can catch the Frenchman though, and employ his much lauded punch-power, things could change pretty quickly.

As far as the final tournament result is concerned, Davis will enter the tournament as favourite. But as previous boxing tournaments have shown, the format is often deeply unpredictable. Hopefully, that will make it all the more exciting for fans.