Exploding electronics became all the rage in 2016, what with the Galaxy Note 7’s stellar performance as the undisputed king of overheating handsets.

But 2017 has brought a new rival to the fore in the form of this melting Snapchat Spectacles case that one unlucky owner brought to the attention of TechCrunch.

The anonymous user claimed they began charging the case and after half an hour, returned to find the charging port transformed into a mangled mess, and the “internals melted”.

A Snapchat spokesperson told TechCrunch: “Our team is in touch with this customer and we are working with him to investigate this issue.

“We can’t comment further until we know more, but want to emphasize that nothing is more important to us than the safety of our community.”

Snapchat’s specs were launched last year and come with a built in camera that can record short 10-second video clips, and upload them straight to a rolling Snapchat story.

The novel shades, which can be charged from a wall outlet or via the case that doubles as a power bank of sorts, have thus far only been sold from pop-up vending machines at various locations across the US. 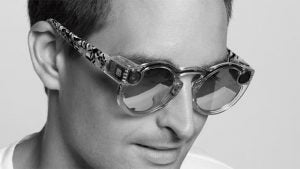 According to the anonymous user, who provided photographic evidence of his claims, he was charging the case without the glasses inside.

He also says he has charged the case numerous times using the provided cable connected to a laptop, battery pack, or Apple iPhone charger.

This time, however, he says using the same Apple 5W wall charging brick resulted in “a burning smell,” and when he investigated, “it had melted the internals. The case was very hot when I went to touch it.”

Snapchat reportedly responded quickly, offering the user a new pair of specs and requesting the old ones back for investigation.

The company has limited the release of the glasses, and has little experience in the hardware field – though there’s every chance this is an isolated incident.

We’ll await the results of Snapchat’s investigation to see just what happened in this case.

WATCH: MWC – What to expect

Let us know what you make of the story in the comments.