5G phones and the gigabit speeds you can hope to enjoy dominated headlines at this year’s Mobile World Congress, but another demo, the transmission of similar levels of bandwidth over visible light using modified LED bulbs, caught our eye at MWC 2019.

Edinburgh-based start-up PureLiFi has been working on getting Li-Fi technology integrated into laptops and phones since it span off from a University of Edinburgh lab and incorporated in 2012.

PureLiFi’s systems transmits data over by having LED light bulbs change in brightness and intensity at ultra-high speeds, speeds beyond human perception. Modulating the light at varying rates means data can be sent as a signal and received and interpreted by a detector – think of it as a very fast Morse code for computers and phones. 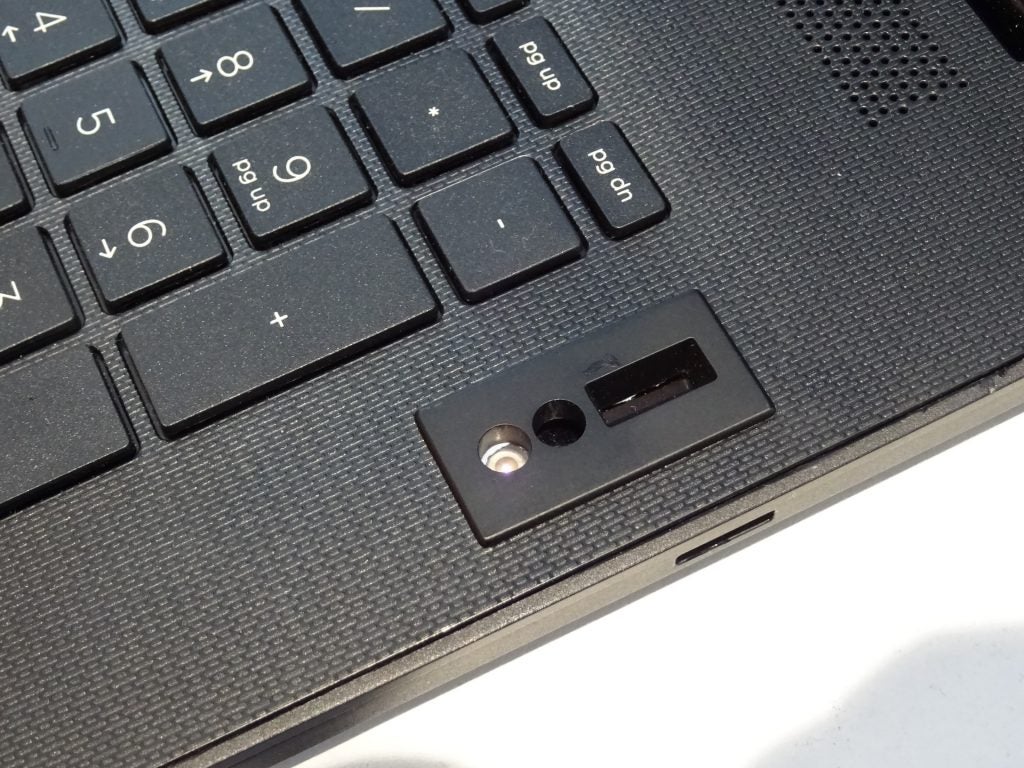 Previous versions of PureLiFi’s hardware have delivered download and upload speeds of up to 42Mbps to devices with integrated Li-Fi sender and receiver modules. Now, the company has demonstrated download speeds approaching 1Gbps, and uploads skirting below the 350Mbps mark.

As well as this huge uptick in bandwidth, PureLiFi has also drastically reduced the size of the components its using, to that point that they’re almost ready to start integrating modules into devices. Trusted Reviews saw the most recent sender and receiver unit built into an HP laptop – an HP 17 ca0007na – and as you can see from the pictures above and below, the sensors are roughly half the size of the previous version.

Early products, like the Li-First and Li-Flame were peripherals, and have been on the bulky side, but PureLiFi has been steadily miniaturising its components over the years.

You should perhaps not infer too much from the presence of HP hardware here, as PureLiFi said that they simply picked these units off of the shelves. 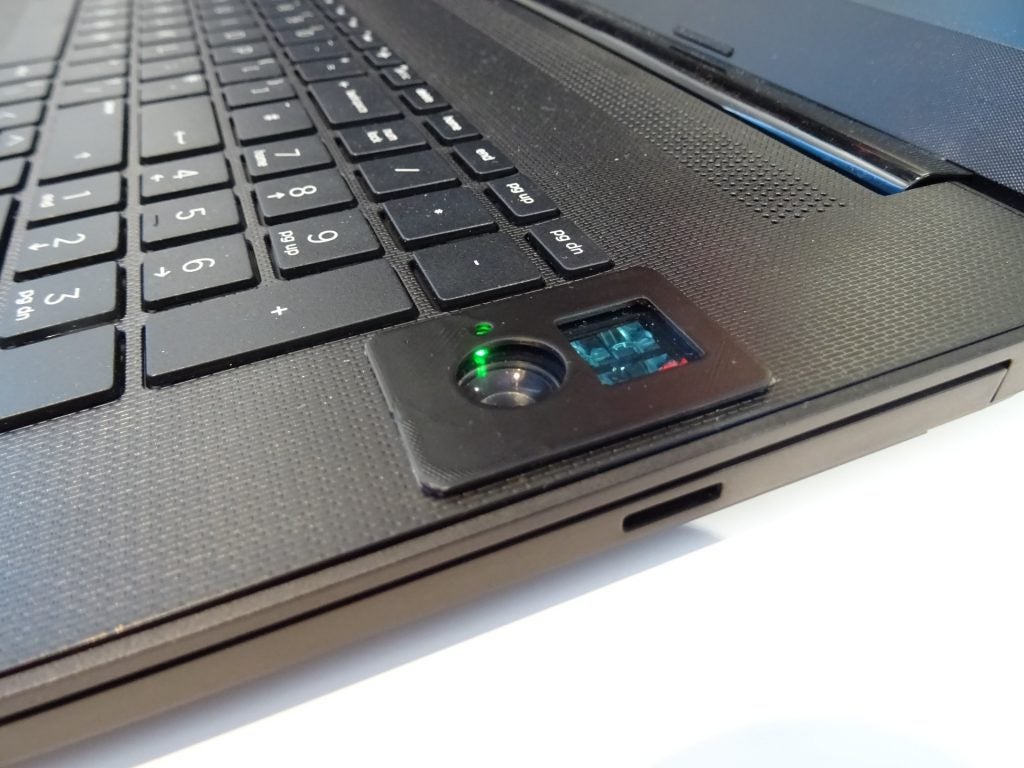 Last year, O2 announced that it was working with PureLiFi on a series of trials with the LiFi-XC dongle. You can see a phone case below with a Samsung Galaxy S5 and a modified LiFi-XC attached. Light fixture makers Lucibel and Zumtobel have also announced that they’re partnering with the start-up. Apart from these companies, PureLiFi is keeping tight lipped on who it’s working with.

“What we’ve done with one of our partners, we’ve already worked on a Li-Fi to Wi-Fi handover… we’ve been testing that out and we’re working on how we can hand over communications automatically there. It’s not ready for release yet.”

As Li-Fi is light-based, it requires line of sight to complete a data connection. If you moved your hand between a Li-Fi sender and receiver module on a laptop and the LED bulb it’s communicating with, the data connection would cease.

For this reason, it’s not intended to be something that replaces Wi-Fi or cellular connections, but something that, in Banham’s words, is “complimentary and additive.” 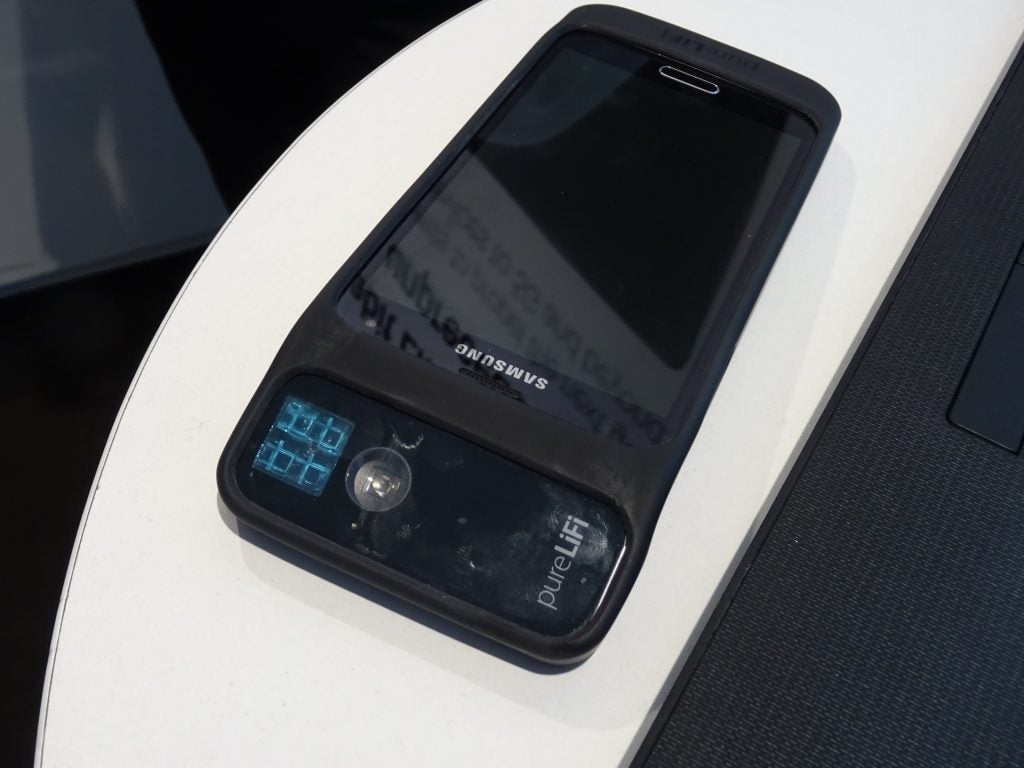 Wi-Fi, especially on the 2.4GHz band, is congested, and as anyone who has tried to get a decent 4G connection at a train station at rush hour will tell you, you can’t always rely on your network provider, if hundreds of other people are all struggling to connect at the same time. And even with 5G laptops in the pipeline, there will be times you either won’t be able to connect to the network, for whatever reason – it might be that those early data plans turn out to be pretty onerous.

“I could be connected to Li-Fi on my phone and then I put my phone in my pocket. Li-Fi needs line of sight to work, so the phone would switch over to Wi-Fi, just as it would now, if you’re moving around, disconnect from Wi-Fi and switch over to [a cellular network connection].”

So, when can we expect Li-Fi receivers to become a standard features in phones and laptops, and when will we start to see Li-Fi systems appearing in homes and offices? Not for a while yet – PureLiFi expects that over the next two years, 3GPP Release 16– the next iteration of 5G – should be completed and it’s after then we should start to see this technology start to take off. So it might be that in 2022, Apple and Samsung announce that new iPhone XIV and Galaxy S13 feature Li-Fi units as well as 5G radios.

Like the idea of every light fitting in your home helping out with Wi-Fi and 5G mobile broadband? Let us know on Twitter via good old fashioned 802.11ac @TrustedReviews.