There’s never been a better time to save a little bit and still bag yourself a top-end smartphone, especially when both the Google Pixel 4a and OnePlus Nord are now official.

You don’t need to spend nearly a grand to get a phone that feels ‘flagship’. 5G, excellent cameras and tip-top displays are now available on devices that can be had for far less.

Both the OnePlus Nord and Pixel 4a are new on the smartphone scene, and even though they go in different directions in a number of areas, if you’re after a bargain Android phone they should be top of your list.

Pixel 4a vs OnePlus Nord Specs: For pure ‘specs’, the Nord gets the win

Related: Does the Pixel 4a have 5G?

If you’re a fan of loads and loads of RAM then the Nord is for you. It comes in both 8GB and 12GB variations, while the Pixel 4a boasts a little less at 6GB. The Nord wins out on storage too, offering 128GB and 256GB options. With the Pixel 4a, there’s just 128GB of storage.

In terms of battery life, or at least what’s on offer, the Pixel 4a has a 3080mAh cell with 18w PD fast charging and the Nord has a larger 4115mAh cell. Like the OnePlus 8, the Nord boasts Warp Charge 30T which should get you a full charge in just over an hour.

Both come with Android 10, with promises of multiple years of update. We’d expect Google’s Pixel 4a to get those updates faster, but OnePlus has a good track record of quick updates.

Pixel 4a vs OnePlus Nord design and display: Do you want bigger or smaller?

While neither of these phones is huge, there’s still a gulf in their sizes. The Pixel 4a boasts a ‘small’ 5.8-inch screen, while the Nord is larger at 6.44-inches. Both have flat OLED panels, FHD+ resolutions, HDR10 support and cutouts in the top corner for the front cameras. You also get an in-display fingerprint sensor with the Nord, whereas the Pixel 4a has it on the back. We prefer the latter, but your mileage may vary. The one key feature the Nord has over the Pixel 4a is that it’s a 90hz panel, meaning it’s smoother when compared to the 60Hz screen on the Pixel 4a.

The bigger display, of course, leads to a bigger phone and the Nord is heavier at 184g.

You can pick up the Nord in both blue and grey hues, while the Pixel solely comes in a black variant only.

As these are cheaper phones, there are some things you won’t get. Neither has wireless charging, an official IP rating, completely metal bodies or expandable storage. Only the Pixel 4a has a headphone port, with the Nord routing wired audio through the USB-C port instead. 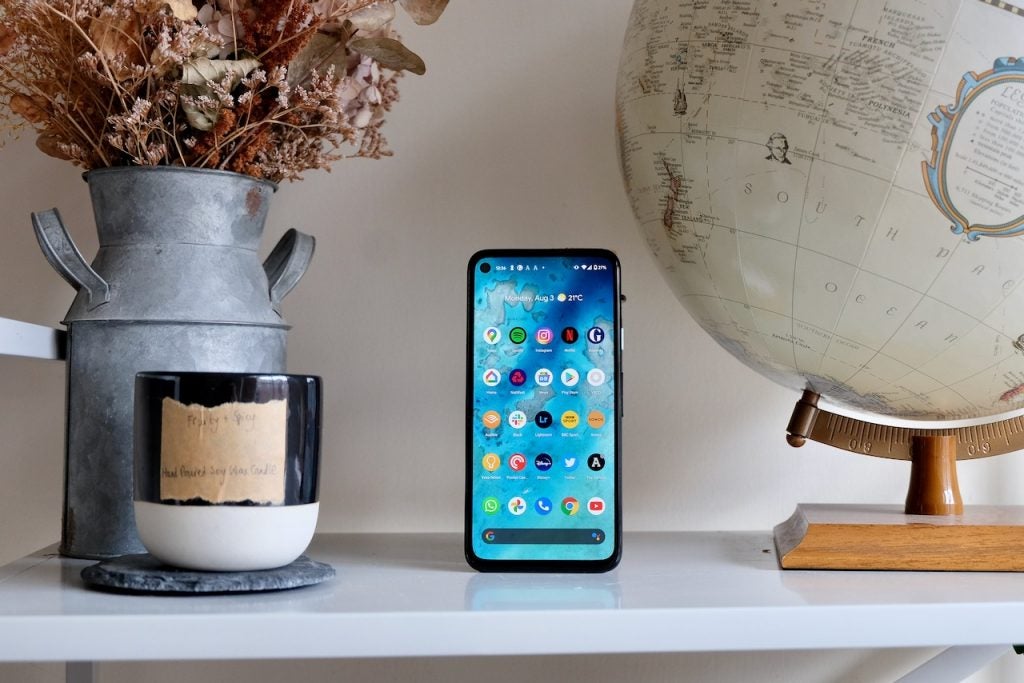 Pixel 4a vs OnePlus Nord camera: Pixel all the way?

The Google Pixel 4a sells itself on its camera. It might only have a single 12MP f/1.7 cam on the back and an 8MP around the front, but it brings over a lot of the Pixel 4’s computational skills. This phone can do a lot with that single camera, including impressive low light shooting and very stable 4K 30fps video.

The Nord has plenty more cameras. There are four on the back: 48MP main, 8MP ultrawide, 5MP depth and 2MP macro. It also has two on the front: 32MP main and 8MP ultra wide.  It can shoot 4K video at 60fps too, a feature missing from the Pixel 4a.

We’ll have more on how the photos compare once we’ve spent more time putting these two phones head-to-head.

Pixel 4a vs OnePlus Nord pricing