Netflix is testing its highest-ever pricing tier, with a new Ultra service tailored for households seeking top quality streaming experiences on the highest number of screens.

When subscribing to the €16.99 tier, those Ultra subscribers would also be able to watch Netflix on four screens simultaneously.

Unfortunately for existing Italian subscribers of the €13.99 Premium tier, they’ll be reduced to two simultaneous streams if the new Ultra tier launches. They currently have access to four.

Also, from the documentation posted by TuttoAndroid (via PhoneArena), it isn’t clear whether Premium subscribers will lose their current access to HDR content too. 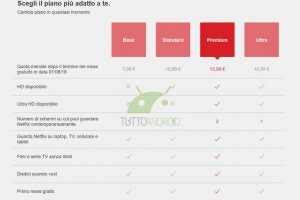 Whether Netflix will roll out the option to all Italian subscribers or will do so in other markets remains to be seen. However if the roll out takes place, there’s a chance Brits could be also asked to pay more to access the very best service Netflix has to offer.

Currently, it costs £9.99 to subscribe to the Premium tier, which includes access to 4K HDR and Dolby Atmos where available. A bump up to Ultra would probably add a couple of quid to the price, judging by the Italian model.

The last Netflix UK price hike came at the end of 2017, so we’d be surprised to see the company go there again. However, a whole new Ultra tier priced above the current offering, syphoning some of the benefits from the Premium tear? That we could see.

“We continuously test new things at Netflix and these tests typically vary in length of time,” a Netflix spokesperson told BGR. “In this case, we are testing slightly different price points and features to better understand how consumers value Netflix. Not everyone will see this test and we may not ever offer the specific price points or features included in this test.”

How much a month are you willing to pay for Netflix? Would another price hike encourage you to send the streaming giant packing? Let us know @TrustedReviews on Twitter.