Apple has finally unveiled the new Apple TV, complete with a revamped remote and UI.

It’s been more than three years since Apple touched TV, but it’s doing it in a big way with the new Apple TV.

There’s a brand-new UI running on the new tvOS and a completely revamped Bluetooth 4.0 remote control that reinvents the Apple TV experience.

The remote itself comes with anew glass-protected touchpad, which makes interacting with the new Apple TV UI much more intuitive.

You can swipe left and right to glide through all the content and tap to select. This brings up all the details about your selected content.

When you’re watching content you can swipe down on the touchpad to bring up a quick-access menu, letting you skip to different chapters at the touch of a… well… touchpad.

There’s also nice little UI touches to complement that new Touch Surface, such as the movie tiles reacting to the positioning of your thumb on the pad. 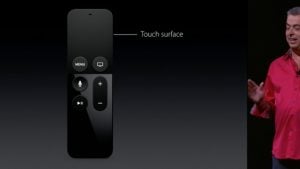 Of course, Siri plays a massive role in the new Apple TV UI. Like the Amazon Fire TV, you can use voice commands to search across all content and switch between apps without having to touch the remote more than to bring up Siri.

When you search for TV shows or movies, the great thing about Apple TV is that it will search for the content across multiple apps – just as you can on select Roku boxes.

At launch you’ll be able to search for content across Hulu, Netflix, HBO, ShowTime and iTunes, with more partners to be announced in the future.

Siri also allows you to make context-specific voice commands, such as filtering movies to only those within a specific genre, containing a certain actor or other perimeters.

There’s also some other new voice commands such as “What did she say?”. When you say this while watching a movie, Siri will rewind the content by 15 seconds and temporarily turns on captions so you can actually hear what was said.

The new UI has other features such as video screensavers filmed by Apple across a variety of worldwide locations, and they switch between day and night shots depending on your current timezone. 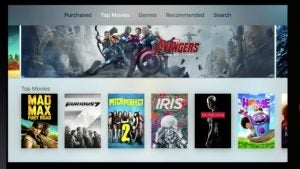 There’s some brand-new games coming to the new Apple TV too – although the unit isn’t quite as gaming-centric as rumours originally speculated.

Hipster Whale took to the stage to say that Crossy Road is coming to Apple TV with new multi-player modes, with cross-platform support between Apple TV, iPhone, iPad and iPod Touch too.

Then there’s Beat Sports, a new game designed specifically and exclusively for Apple TV by Harmonix. You swing the new remote to hit the beats in time with the music. It seems quite addictive, if a little Wii-feeling. 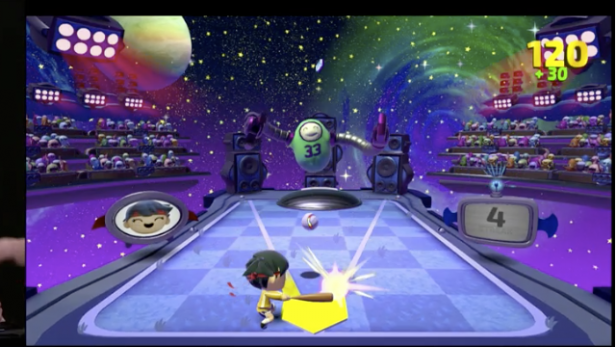 The App Store has also been revamped on Apple TV, but feels familiar to those using iOS devices. There’s the usual Features, Top Charts, Categories, Purchased and Search filters for apps and games.

What’s more, Apple has confirmed that anything you buy on your iPad and iPhone will be download able for your Apple TV too. And you’ll be able to pick up where you left off whenever you get home.

The new Apple TV runs on the 64-bit A8 chip found in the iPhone 6 and iPhone 6 Plus, and it’s only 10mm taller than the last Apple TV.

Around the back you’ll find a HDMI, power and Ethernet port. The remote lasts three months and can be charged via the Lightning port on the base.

Apple TV release date and price
The Apple TV will be available in late October. The UK pricing is yet to be confirmed, but in the US it will retail from $149 for the 32GB option and $199 for the 64GB.