Before Demon Souls propelled FromSoftware into the mainstream, the developer was better known for its mech combat games, most famously the Armoured Core series.

But Metal Wolf Chaos never got the same worldwide reception. Released an an Xbox exclusive back in Japan in 2004, it’s a bizarre release by even FromSoftware’s esoteric standards.

The premise is this: In the early 21st century, America has plunged into a second civil war, with several states seceding from the union. The vice president, Richard Hawk, commits a coup d’etat against President Michael Wilson, who’s forced to flee the white house.

So far, so typical video game espionage. The difference in Metal Wolf Chaos, is that in order to put things right, you play as the president himself as he fights to regain control of the nation in a suit of ‘Metal Wolf’ mech armour. You’re literally fighting to protect the future of the union as a superpowered mech president. 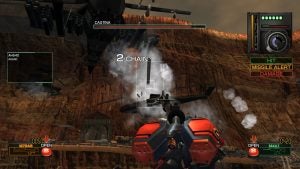 Fast forward to 2018, and Metal Wolf has gained a cult status. Fans, recently introduced to FromSoftware thanks to the success of Dark Souls, started to dig through the back catalogue of this now-legendary developer. As a Japanese Xbox exclusive, Metal Wolf was unattainable enough for people to obsess over.

There was just one problem though, and that’s that the game received such a limited release that it now costs hundreds of dollars to import a copy from Japan.

Clearly a re-release was needed, and after a tweet from Devolver generated a huge amount of interest from fans, the western publisher eventually got a conversation started with From to get the ball rolling. Now, a re-release is due to come out later this year in 2018.

Why backwards compatibility wouldn’t be enough

Our first question when we sat down for a demonstration of the port with Devolver at E3 2018 was why simply making the game backwards compatible on Xbox One wouldn’t be enough.

After all, since Microsoft announced the functionality last year, we’ve seen a number of classic games brought to the current generation console. The Xbox One is even clever enough to upscale these games itself, and would no doubt do an excellent job despite Metal Wolf’s original 480i resolution.

Devolver had a number of answers to this question. 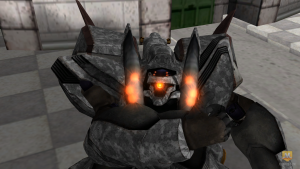 First off is that Metal Wolf Chaos XD will be available for both the PS4 and PC in addition to the Xbox One, which obviously wouldn’t be a possibility if it was just a backwards compatible title.

Next up is that Devolver has fully translated the game into English. In a weird stroke of luck, the game originally received a full English voice-over (preserved for this release in all its camp and ridiculous glory), but its menus were a Japanese-only affair. These have all been translated for this re-release, and the UI has also been cleaned up for good measure.

Finally, while Devolver was keen to emphasise that the underlying gameplay code is all the same, it’s nevertheless tweaked the game slightly to bring it into line with modern sensibilities. You won’t have to manually save after each mission for instance, and there’s even talk of putting in an ultra-difficult mode.

Metal Wolf Chaos XD Gameplay Preview — How does it play?

We got the chance to sit down to play the game’s prologue, when you first realise Richard Hawk has ousted you from power and you must mount a daring escape from the White House to get aboard Air Force One.

You’re piloting a mech suit, so the game’s controls can feel a little tanky at times. Your arsenal consists of two guns, which you can swap out on the fly. After a little experimentation, we settled upon putting a rocket launcher on our right, while having a machine gun on our left, but Devolver promised that it’s maintaining all of the 100 unlockable weapons in the game, complete with their various upgrades

With our rocket launcher equipped, we made quick work of the wave after wave of enemies, and before long we’d built up a special attack, which we activated by pressing down on both thumbsticks. 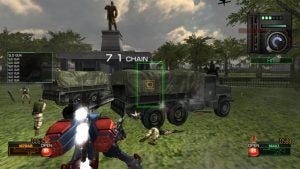 It decimated our enemies, leaving us free to experiment with some of our other secondary moves such as a dash attack, and a devastating ground pound that took out all the enemies in our immediate area.

It was all delightfully arcadey fun, but occasionally the old-fashioned design caught us off guard. Over the past decade we’ve grown far too used to games that not only feature regenerating health, but also desaturate the screen when you’re close to death.

In contrast, Metal Wolf Chaos features a much more traditional health bar, which was a little easy to miss as the game’s action ramped up.

Eventually we made it aboard Air Force One and completed the prologue mission. Devolver intends to preserve every one of the game’s original 14 missions, which it estimates should take around half an hour each to complete.

Metal Wolf Chaos XD is a dumb game. Everything about it, from the presidential seal on the rear of your mech suit, to the so-bad-it’s-good voice acting, builds a picture of a game that’s designed to be played on its own terms.

It’s an old fashioned experience, but if you’ve been curious to try out this illusive piece of From’s history, then Devolver’s release is about as authentic as it’s going to get.

Are you tempted to try out a classic piece of From’s past? Let us know @TrustedReviews