The LG V60 is expected to be unveiled soon, so here we have collected all the very latest rumours and news about the upcoming flagship device.

LG was once one of the dominant players in the smartphone market, rubbing shoulders with the likes of Samsung. But in recent years, sales have become somewhat sluggish, particularly in Europe. In our review of this device’s predecessor, the LG V50, we were particularly underwhelmed by its disappointing cameras and the derivative design, awarding the device 3.5 stars out of 5. Can the LG V60 improve upon this track record?

It’s highly likely that the LG V60 will be released at MWC 2020, which is held from 24-27 February in Barcelona. There’s a good chance that the show will also see the launch of another phone from the brand, the LG G9, seeing as last year’s event heralded the launch of the LG G8 and the LG V50.

It’s likely that this year’s V-series will have a similar price to last year’s, so steel yourself for a fairly steep price of around $999 (~£768).

However, the LG V50 was locked to EE’s network in the UK and was altogether unavailable to buy SIM-free, so you might well have to sign up to a contract to get your hands on the LG V60 too. At launch, the starting monthly price for the V50 on a 5G tariff was £64 across two years (=£1536) plus an up-front cost of £149.99, in a deal that also bundled in the handset’s signature dual-screen accessory.

Speaking of that dual-screen accessory, the Korea Herald reports that it’s set to make a comeback, writing that this time around it will “be equipped with an upgraded folding structure”. 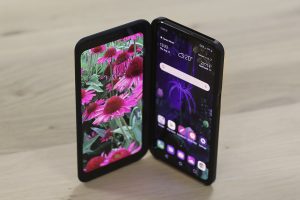 In our review, we thought that the dual-screen accessory added too much bulk and weight to the device without adding a great deal of functionality, so it’s good news that LG has been working on improvements to the implementation.

Additionally, it’s set to have an under-display fingerprint scanner just like the LG G8x and flagships from other brands.

The LG V60 is strongly expected to pack the latest and greatest Qualcomm mobile chipset (as have all of its predecessors), which this year will be the Snapdragon 865. This will be paired with the X55 modem, which enables 5G connectivity.

On top of that, a recent image from SlashLeaks showed that the device seems to be prepared for four rear cameras, given the size of that rear camera module. We don’t yet know the exact make-up of this menagerie, but an educated guess would have it pegged as including a main wide angle camera, a telephoto sensor, an ultrawide lens, and a Time-of-Flight sensor.