Here’s all we know about the South Korean brand’s next flagship, expected to be called the LG G9, from the price and release date to the specifications.

Having been one of the biggest smartphone manufacturers in the business, LG lost some of its lustre in recent years, with sluggish sales to show for it. With the release of the G9, the brand is undoubtedly aiming to re-establish itself as a competitor to the likes of Android giants Samsung, Google and Sony.

In pursuing this goal, it seems that LG might think the time is right for a rebranding exercise. According to a report, the manufacturer is considering ditching the G-series tag for this new model and ushering in a new name entirely. But whatever it will or won’t be called, here’s all we know so far about the upcoming flagship.

There hasn’t been any official word on the LG G9’s release date, but based on historic launch patterns we can still make an educated guess. Here are the release dates for the previous five entries in the series:

Under normal circumstances, you could expect the LG G9 to be released in the Spring months, with April, in particular, seems to have been a strong bet. However, due to the coronavirus outbreak, the release date is likely to be significantly delayed – perhaps even until summer.

LG hasn’t yet released any official pricing info on the LG G9, and rumours have been thin on the ground too, so our price estimates are based on the cost of the previous model in the series (which wasn’t even officially released in the UK).

The LG G8 retailed for $819 in the US, which converts to approximately £630. We expect the G9 to go for a similar price, making it considerably cheaper than most other flagships and closer to a mid-ranger. But skewed currency conversions could still UK consumers with a raw deal, as happened with the iPhone 11 which costs $699 in the US but £729 in the UK.

Twitter tipster @OnLeaks revealed what he claimed were full renders of the device, available for your perusal in the embedded video below:

If this evidence is to be believed, the LG G9 will have a teardrop notch at the top of the screen with minimal bezels around the edges, plus a rear camera set-up that features four sensors (arranged in a horizontal bar like on the Samsung Galaxy S10). This phone will be relatively large judging from the rumoured dimensions, measuring 169.4 x 77.6 x 8.8mm and boasting a display spanning between 6.7 and 6.9 inches.

However, in April LG revealed a shift in the brand’s “design language”, along with sketches of a new handset that will surely be the next flagship model, wich seems to contradict the claims above: 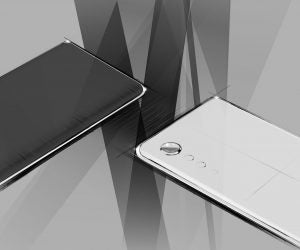 The brand is keen to trumpet the smoother corners and angles on the new device, along with a new “Raindrop” camera; the lenses are arranged from largest to smallest in descending order from the top, and are not encased in a boxy module. These new, more elegant design hints are welcome considering that we criticised the LG G8 for having a “bland design”.

But the departure in terms of design and LG’s clear desire for some kind of new beginning does give credence to te idea that a new model name could be in order.

Even more important than the design is, of course, are the specifications and resulting performance that the device can boast.

LG’s flagships traditionally use Qualcomm’s top-of-the-line mobile processor, which this year will be the Snapdragon 865. This device comes with an external X55 modem that offers 5G connectivity, as well as packing a good amount of processing power that should keep even the most demanding apps happy.

Beyond that, we can tell from the renders that the device will have four cameras; this diverse array is expected to include a primary wide-angle snapper, a telephoto sensor, an ultrawide lens, and possibly a time-of-flight sensor for 3D-imaging. That would be a versatile set-up on paper at least, but the quality of the camera will need to be thoroughly tested before we can pass judgement on it.

LG remains one of the very few manufacturers still to provide its flagship phones with a 3.5mm headphone jack, a feature that was once a universal industry standard. But in reassuring news for audiophiles, we expect the G9 to retain this prized but now rare feature.