Lenovo has revealed it will be launching the Lenovo Yoga 5G laptop this week (October 5), which is supposedly the ‘world’s first 5G PC’.

The new laptop will only be available via a paid-monthly contract with EE initially, similar to your conventional smartphone contract. This means you won’t be able to buy the laptop separately, despite featuring a SIM card slot where you can stick your own card inside.

Other features include a Qualcomm Snapdragon 8cx processor, up to 4K 14-inch touchscreen and a 360-degree hinge so you can flip it into tablet form.

Keep on reading for more details on the Lenovo Yoga 5G, and keep an eye on Trusted Reviews for our upcoming review.

Lenovo Yoga 5G release date – When will it launch?

The Lenovo Yoga 5G will be available to buy from 7 October.

You’ll be able to buy the laptop directly from EE’s website as part of a monthly plan.

Lenovo Yoga 5G price – How much will it cost?

In total, that works out at £3000 (£2700 for existing EE customers), but that cost includes a 5G sim card with 80GB of data per month as well as the Lenovo laptop. Lenovo Premium Care and Microsoft 365 are also included for the duration of the contract.

The laptop will still potentially launch as a standalone purchase in the future, although Lenovo has said it will only be available via an EE contract initially. Lenovo has confirmed the laptop itself is valued at £2000, which will likely be the retail price if it ever does go on sale without a contract. 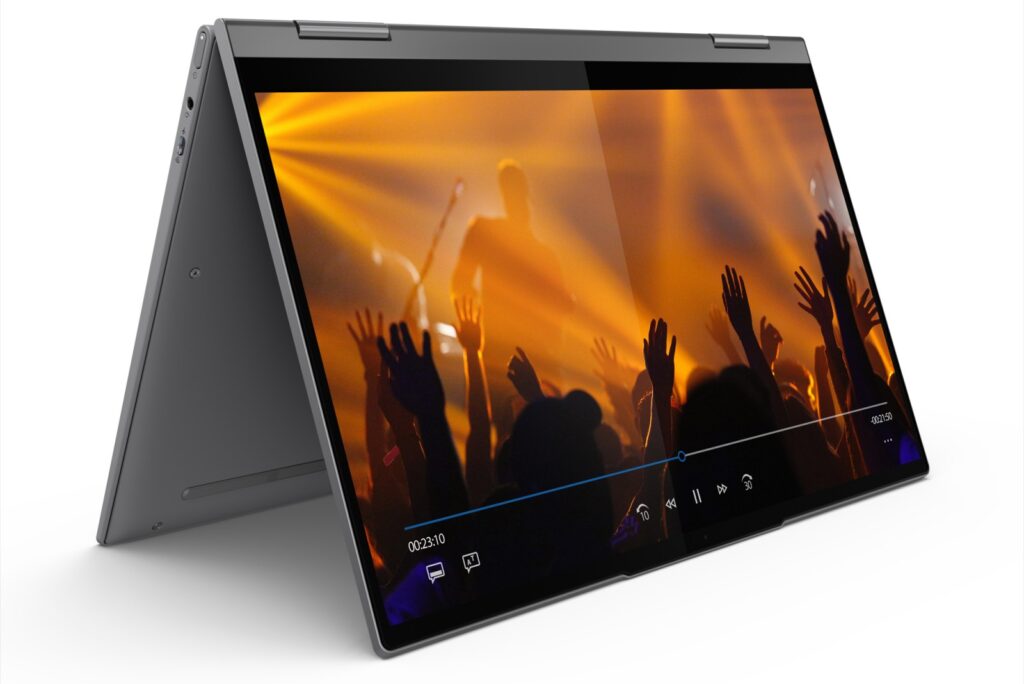 Lenovo Yoga 5G specs – How powerful is it?

The Lenovo Yoga 5G is running on an Arm-based Qualcomm Snapdragon processor, which is becoming an increasingly popular alternative to the more conventional Intel and AMD chips.

Arm-powered laptops boast a number of advantages over the Intel x86 counterparts, typically seeing longer battery life, thinner designs and improved thermal performance. Lenovo said that these strengths were important for a 5G laptop since such connectivity can be a big drain on the battery and can cause laptop temperatures to rise.

There are downsides to Arm processors though. As things stand, they’re generally not as powerful as the latest AMD and Intel CPUs and have suffered compatibility issues with Windows apps and software, although Microsoft has confirmed it’s working on an emulator to solve such problems. We’ll have to wait until we get our hands on a review unit to see whether such problems have been resolved.

Elsewhere, the specs look pretty impressive. The 512GB storage is plentiful for most, while the claimed 24-hour battery life will come in very handy – although take that figure with a pinch of salt until we review it.

The meagre Qualcomm Adreno 680 graphics will likely rule this laptop out of any content creation or gaming workloads, with this laptop pitched primarily as a productivity portable.

Lenovo looks to be offering Full HD and 4K variants for its 14-inch screen, although it’s unclear how much the latter will cost.

Lenovo Yoga 5G design – How does it look?

A 360-degree hinge allows you to flip the laptop into ‘tablet mode’ or prop it up like a tent when watching video content.

An IR camera and optional fingerprint reader also provide an extra layer of security, while also removing the need to enter a password for sign-ins.

Two up-facing speakers can be found on either side of the keyboard, with the power button shunted to the side rim, besides a switch that can flick between 5G and airplane mode.

In terms of ports, the Yoga 5G features 2x USB-C, a headphone jack and a SIM card slot. That means there’s no room for a traditional USB-A port or SDCard slot.

Keep an eye on Trusted Reviews for our incoming review on the Lenovo Yoga 5G.