Android 4.1 Jelly Bean has made its way to 13.6 per cent of all Android devices, according to the latest reports.

Google revealed this interesting snippet of information in its latest update over on the official Android Developers website.

This represents a steady increase for the latest main build of the Android OS, after it hit the 10 per cent mark around a month ago. Doubtless this has been spurred on by Christmas sales of Jelly Bean phones like the Google Nexus 4 and the ever-popular Samsung Galaxy S3.

Other interesting figures to emerge from this latest report include the fact that Android 4.0 Ice Cream Sandwich – the previous version of the Android OS – appears to have peaked. At 29 per cent, it’s virtually unchanged since January.

A mere 1.3 per cent of Android users are still using Android 3.0 Honeycomb, which is unsurprising given that this was a pretty limited tablet-only version of the OS, and that the early Android tablets that ran on this hardly set the world alight.

The most popularly used version of Android remains Android 2.3 Gingerbread with 45.6 per cent, while a not inconsiderable 8.1 per cent still use the positively ancient Android 2.2 Froyo. 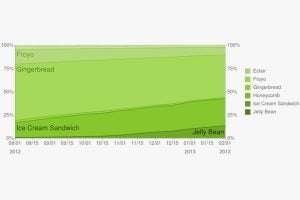 This goes to the show the number of older and less capable Android devices still in use out there.

It’s also true that Google continues to struggle to get the latest version of its OS out in a timely fashion. This is thanks to a number of factors, including tardy network operators (who have the final say on releasing major new updates) and the vast array of Android hardware configurations that need to be catered for.

Which Android version is your phone on? Have you been waiting for an update for long? Let us know in the comments section below.