Intel’s plans to use AMD graphics on its new mobile chips was one of 2017’s most surprising stories. Now we finally have the full details on the new chips, including how they’ll bring gaming to thin and light laptops.

Branded G-series, the new chips will use the existing H-series enthusiast mobile CPUs, combined with Radeon RX Vega M onboard graphics in a single package.

Powering the technology is the Intel Embedded Multi-Die Interconnect Bridge (EMIB), which joins the chips together. As a result of using EMIB, Intel is claiming a 50% reduction in footprint compared to using discrete memory; and the G-series chip is thin at just 1.7mm thick.

The net result is a package that can fit into very slim laptops, with Intel promising high performance and smooth gaming in light computers.

Intel has joined its CPU to the GPU using an 8-lane PCIe 3.0 connector. And, the GPU uses 4GB of High Bandwidth Memory (HBM2), which is far more power efficient compared to GDDR5.

Depending on the chip, the RX Vega M GPU can have up to 24 compute units, and supports Vulkan and DirectX 12. Its integrated Radeon Display Engine supports up to six displays, with support for 4K via DisplayPort 1.4 and HDMI 2.0b.

As well as the Radeon GPU, there’s an Intel GPU onboard, too. Using Hybrid graphics, systems will be able to switch between the two chips, optimising for battery life or performance, depending on need.

Using EMIB, Intel has been able to fine-tune power saving, too. With Intel Dynamic Tuning, components can be tuned individually to hit a combined TDP. As a result, according to Intel’s figures, Dynamic Tuning can save up to 17.5W, while running at the same frame rate as a system with Dynamic Tuning turned off. Effectively, this should deliver better battery life while gaming, although we’ll have to wait for the first set of products to see how effective Dynamic Tuning really is.

Intel will ship a Core i5 and Core i7 chip with RX VEga M GL graphics. According to the specs for the i7 variant, the chip will have four cores and eight threads, and a clock speed up to 4.1GHz. The RX Vega GL graphics will have a base speed of 931MHz, a boost speed of 1011MHz, 20 Compute Units and 32 pixels per clock. These chips have a 65W TDP.

A higher-end Core i7 part will ship with an RX Vega GH Graphics chip. As well as the processor having a faster max clock speed of 4.2GHz, the GPU has a base speed of 1063MHz, a boost speed of 1190MHz, 24 Compute Units and 64 pixels per clock. This chip has a higher 100W TDP.

This latter chip will be the model for enthusiasts, with unlocked CPU, GPU and HBM2, giving the flexibility to overclock each of the chip’s components.

Full specs can be seen in the table below. 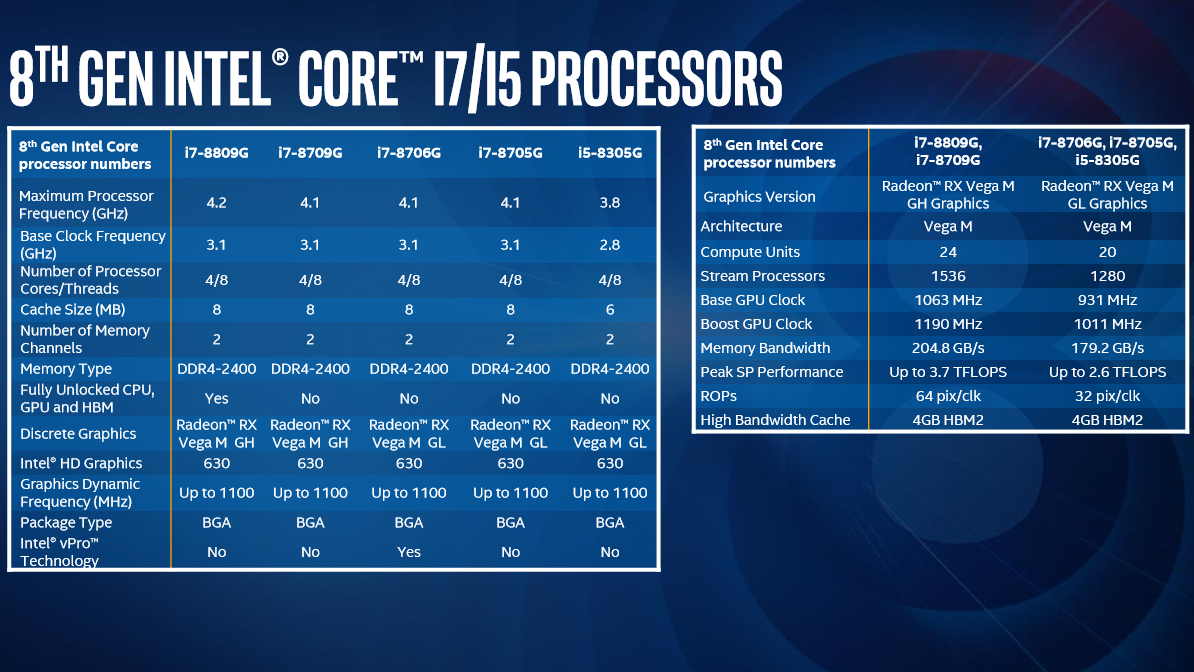 Just how fast will the chips be? Intel’s presentation compared the G-Series performance to three-year-old desktop computers, which doesn’t particularly say much. However, there were some actual figures in the results to give an idea.

In other words, the higher-end chip looks like a decent 1080p gaming platform, while the lower-end chip seems ideal for lighter gaming. For single combined CPU/GPU the results are impressive, especially when you think about the size of laptop that they’ll be installed in. Intel has some OEM partners lined up to take the new chips, with laptops ready to be announced over the next few days at CES. Stay tuned to find out details as they come in. Of course, we’ll bring you reviews to tell you how good the Intel G-Series really is as soon as products are available.