CES 2016 is well underway and Intel has taken the stage to unveil its latest batch of technological goodies. Keep checking this page for updates on Intel’s CES 2016 announcements.

Intel CEO Brian Krzanich kicked off the keynote announcing partnerships with extreme sports broadcaster Red Bull Media House and the X-Games to use the firm’s RealSense cameras and Curie chips.

RealSense is a technology Intel unveiled in 2014. It’s a camera that can capture and render 3D images. Krzanich said the tech will transform the way players experience and view sports.

“We’re changing the experience and making you the director,” he said.

He showcase a custom “Replay” feature on a basketball game that let viewers pause games and move freely though the footage. He said the feature will let people view matches at various angles and spot things they would otherwise miss, such as foul play.

Krzanich added the firm plans to expand the Replay feature to multiple sporting events.“ We just showed you basketball,” he said.

“But we’re rolling it out to other sports. We’re on the cusp of a breakthrough in live sports. Soon this will change every big sport in a big way.”

Curie are a new form of chip designed for wearables. Krzanich revealed the chip will “ship in volume this quarter for a price below $10.”

He added the deal will improve the amount of real time biometric data sports broadcasters, like Red Bull Media can offer readers.

“With Curie we believe we’ve created a technology that will change the world of sports. The Intel Curie enabled technology we shared tonight is about how we interact with equipment, the snowboard the BMX,” he said.

He added, “You’ll see it first at the X-Games later this year”.

Details on the glasses were scarce though Krzanich claimed they will offer users real time coaching and help athletes improve their performance.

“For anyone that wants to improve their well being how cool would it be to have a coach right there with you,” said Krzanich.

“This is the start of a dramatic revolution in sports, we want to bring this technology to every sport. To change how they are viewed, how people train, and how we improve our own skill sets.” 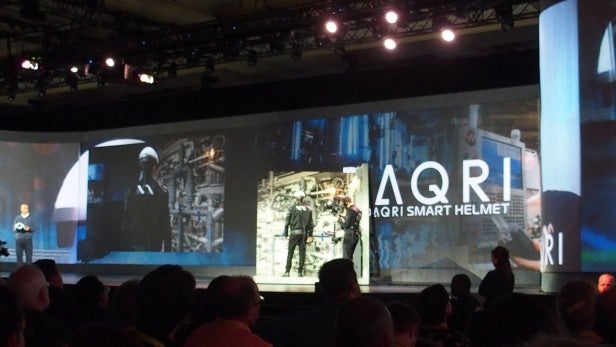 Krzanich said the internet connected helmet will Recognise what equipment the worker is interacting with and give step by step instructions how to fix things or solve problems using an embedded RealSense camera.

The helmet will also feature a visor that will offer an undisclosed number of “enhanced” vision modes. A custom thermal vision mode, similar to the Predators movies’ monsters, was showcased at the event.

The helmet begins shipping today. Pricing was not revealed.

A RealSense drone and robot

“Last year I showed you some advanced but expensive drones that could see and react to their environments. Tonight we’re taking that technology to the next level. It’s my pleasure to introduce you to the Yuneec Typhoon H drone with RealSense,” he said.

“What truly distinguishes this drone from all the others is the Real Sense camera. With RealSense and an Intel CPU this drone goes everywhere, it can navigate any obstacle […] It has the most advanced collision detection system in any drone.” 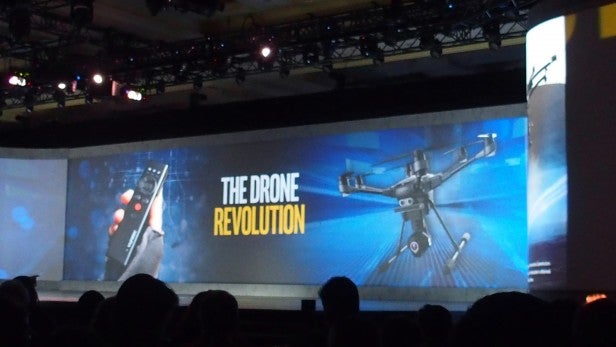 The only other technical details offered about the drone were that it has a collapsible propellers, a 4K camera, retractable landing gear, and controller with a built in display.

The drone will be available in the first half of this year “at a price of less than $2,000”.

The Ninebot Personal Transportation Segway Robot is a custom Segway that turns into a personal assistant, customisable droid.

It can be connected to smart home sensors to enact a variety of tasks, like answering the door when the bell rings. Krzanich said the robot’s RealSense software is built on a new open platform that is open to developers. 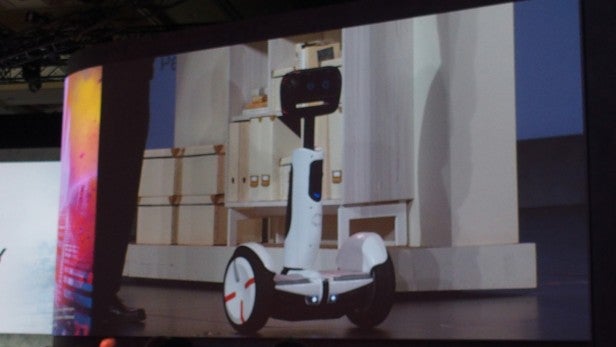 “Developers can build on this platform to create new tools and uses for Segway Robot. It’s a truly open platform,” he explained.

“This is the beginning of a new ecosystem where robusts can grow and develop and become useful partners.”

The Segway Robot software is set to be released to developers in the second half of this year. Details on the full consumer release were not disclosed during the keynote.