Retro handheld console, the Spectrum ZX Vega+, has had its crowdfunding campaign suspended by Indiegogo, with the company behind the project putting delays in shipping down to missing software.

The crowdfunding company confirmed to TrustedReviews it has halted the Clive Sinclair-backed project, which means it can no longer receive pledges for financial backing.

According an Indiegogo spokesperson, the delay in delivering the product and a lack of communication from the company behind the project was to blame for the campaign being pulled.

Retro Computers Limited, the company responsible for the campaign, initially said the Spectrum ZX Vega+ was due to go into production in the summer of 2016, but backers of the project have not yet received the product.

In a statement, the company explained the delay was down to missing software for three of the user features – something it says was only discovered during what it had expected to be the final testing phase.

Indiegogo says it asked for more communication from Retro Computers Limited, but its requests weren’t met with an adequate response. The company wouldn’t confirm whether the project was cancelled or temporarily suspended.

The Spectrum ZX Vega+ campaign managed to gain more than £513,000 ($624,000) in funding, achieving its crowdfunding target, before it was halted.

On the Indiegogo page for the project, the product is described as “the world’s only hand-held LCD games console with 1,000 licensed games inside that can also connect to your TV.”

It read: “During what we had expected would be final testing of the product prior to the first shipment, we discovered that the software for three of the user features, which had been announced for the product, had not yet been implemented. We are taking immediate action to rectify this situation but realistically we now expect it to take a few weeks before we will be ready to ship the first units.”

The company claims it had to recreate the technology “completely from scratch” after it was handed incomplete materials following the resignation of two staff members last year – an issue apparantly compounded by trouble with obtaining the rights to certain games.

Levy says the company now expects to make the first shipment of Vega+ units a few weeks from now, and promises updates on progress “as and when we feel it is appropriate.”

The BBC has reported the developments, but claims the group behind the project asked the outlet not to publish any stories due to “threats of violence” against staff.

David Levy initially issued a statement that said: “Following a credible threat of violence against personnel of Retro Computers Limited, including threats made as recently as last night, we asked [technology desk editor] Leo Kelion and the BBC to refrain from publishing a story we believe to be factually inaccurate and might put people at risk of physical harm, alarm and distress.

“Since December 2016 the BBC have formally been on notice that this is a police matter, and we ask that the BBC and Mr Kelion do not compromise the police investigation.”

The BBC says it delayed publication of its article to give managing director Suzanne Martin time to produce evidence of the claimed threats. 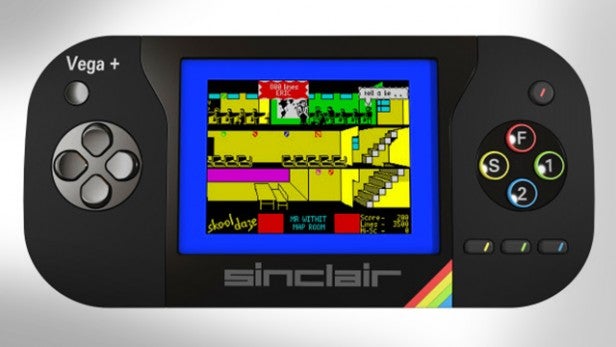 However, according to the report, no such evidence was forthcoming, with backers criticising Retro Computers Limited after not receiving the product – or any response to requests for more information from the company.

Ms Martin reportedly told the BBC unexpected issues with the console buttons were to blame for the delay, following the outlet’s refusal to provide a copy of its report prior to publication.

She said: “In November, we identified an improvement we believed was essential to the Vega+ gaming experience.

“An improvement that would make the feel of the product far better, including a correction in the design of one of the buttons, making it more robust and able to withstand the rigours of extended game-play. We also wanted to make sure we did justice to the Sinclair legacy.”

“This change has caused a brief delay, and we are truly sorry about that, but we needed this time to improve the product, and we have now completed the necessary revisions, and we are delighted to announce that we will ship the first units in February 2017.”

Retro Computers also says it has been embroiled in a legal battle with its former former sales agent, Cornerstone Media International Ltd and its director Nicholas Malcolm Cooper, who they claim owes the company a significant amount of money.

David Levy ends his statement saying: “All of us at Retro Computers Ltd very much regret these delays… to the many of who have been sending us messages of encouragement, we thank you most sincerely.”

Let us know what you think of the latest developments in the comments.