Honor has revealed its latest series of smartphones, introducing a very bold new look along with high-powered specifications.

The Honor 30 Pro and Honor 30 Pro Plus have been unveiled today, with a very bold branded design that’s bound to catch the eye. But what’s under the hood should draw attention too, from the Kirin 990 5G chipset to the beefy 4000mAh battery. Read on for all the key specs, plus the differences between the two models.

The Honor 30 Pro has got a 6.57-inch OLED screen with a 1080 x 2340p resolution. There’s a cut-out notch at the top-left to house a dual selfie camera consisting of a 32-megapixel and an 8-megapixel sensor. The 4000mAh battery is enabled for 40W fast-charging, while it runs on a Kirin 990 5G processor and is available with 8GB of RAM and either 128GB or 256GB of storage space. 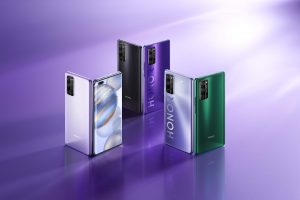 On the rear panel there’s a total of four snappers: a 40-megapixel main wide angle camera, an 8-megapixel “periscope” sensor that offers 5x optical zoom, a 16-megapixel ultrawide lens, and finally a 2-megapixel depth sensor. Also adorning that rear panel is a large HONOR branding, reading from bottom to top; it’s certainly striking, but won’t be to everyone’s tastes. The device is available in a range of colours, including dark green, dark purple, light blue, white, and black.

The Honor 30 Pro Plus bears a remarkable resemblance to its sibling in the series; despite the name, there’s no size differential as they both have a 6.57-inch screen, and there’s not a large performance difference as they both have the same Kirin 990 5G chipset (although the Plus version is available with 12GB of RAM). One of the biggest differences is that the Plus version has a 50-megapixel main sensor, and its display has a 90Hz refresh rate; it’s also enabled for fast wireless charging at 27W.

Currently the devices have only been launched to the Chinese market; there’s no word yet on global availability or pricing.