GoPro has officially unveiled the Hero 9 Black. The successor to the Hero 8 Black is packed with upgrades, including two displays and an extended battery life.

The action camera has been kitted with a new image sensor to deliver 5K video at 30 fps (though you can still record 4K at 60 fps) and 20-megapixel images. The Hero 9 Black also takes advantage of next-gen HyperSmooth 3.0 video stabilisation with in-camera horizon leveling.

The most obvious difference between this camera and the Hero 8 Black visually is the introduction of a second, 1.4-inch front-facing display. The rear display has also been boosted to 2.27-inches, meaning you’ll be able to see what you’re capturing from every angle.

The camera has a 30% longer battery life than the Hero 9 Black, as well as improved performance in cold weather. 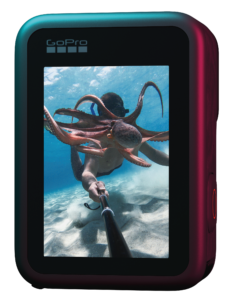 GoPro has eliminated plastic from the Hero 9 Black’s packaging, instead protecting it with a travel case with room for additional mounts and accessories.

Furthermore, the GoPro Plus subscription has undergone a change, being renamed to simply ‘GoPro’.

“HERO9 Black reflects our commitment to delivering what our customers have been asking for, including more value for their money”, said GoPro founder and CEO Nicholas Woodman.

“HERO9 Black is a beast of a product, and GoPro subscribers can get it for £100 off at GoPro.com while also enjoying unlimited cloud storage of their GoPro footage, up to 50% on everything at GoPro.com and no-questions-asked camera replacement. And we’re not done, with more value adds coming to GoPro subscribers later this year”.

The Hero 9 Black is available globally for £429.99, or £329.98 with a yearlong subscription to GoPro. Existing GoPro subscribers can also nab the new action cam at its discounted £329.98 price. The Max Lens Mod will be available in October and is priced at £89.99.