Google is rolling out a new feature to its mobile search facility that will answer your queries before you’ve even finished typing them.

Regardless of the improvements made to mobile keyboards and the ever-improving speed of Google’s search algorithms, typing out a lengthy search query continues to be a bit of a chore.

Google’s next step in combatting search query fatigue is to preempt your questions with answers. It’s been noticed that a new feature is rolling out to Google search that will provide answers to queries while you’re still typing them out.

The Next Web has noticed the rollout, and points out that the feature only seems to work with short, simple questions for now, and mainly those involving dates for answers.

An example provided is the question “when did Hawaii become a state?” While this is being typed out, mid-way through typing “Hawaii,” the answer is provided in Google’s usual search suggestion field (it was August 21, 1959, in case you were wondering).

The rollout of this feature appears to be a slow and low-key one, but the report claims that users are noticing the update being applied to the Chrome and Google apps for both iOS and Android.

Google will no doubt have more to say about search and plenty of other things when it takes to the stage at 17:30 (GMT) for it Google I/O keynote address. It’s set to be a bit of a marathon at two-and-a-half hours long, so ensure you have a comfortable seat and prepare for a late dinner. 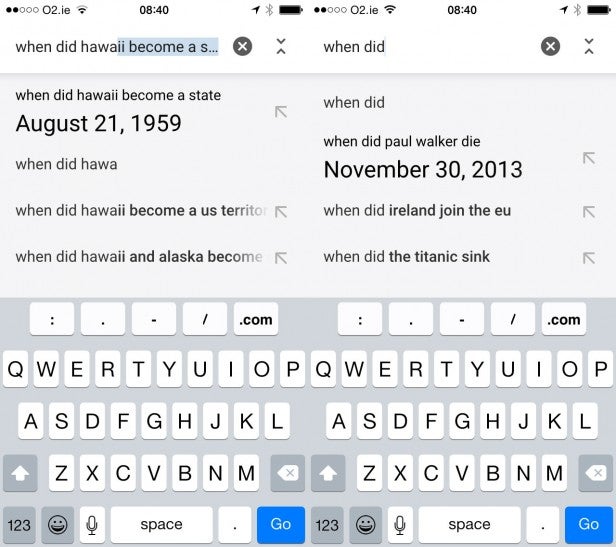