The Samsung Galaxy S10 is almost all anyone can talk about right now, but Sony has certainly spiced up the conversation with the announcement of the Xperia 1. Could this super-tall 4K phone potentially stand up to Samsung’s slick and stylish champion? Here’s how the two new phones compare after an initial play with both.

Sony had appeared to be drifting towards Samsung’s Galaxy S design language with 2018’s Sony Xperia XZ3, but the Sony Xperia 1 ditches that approach. It’s a less sleek, squarer-looking phone than the flowing Samsung Galaxy S10, that’s for sure.

Both phones are glass front and back, with a metal rim in between. But the Xperia 1 doesn’t curve its display off at either side like the S10. Indeed, its screen doesn’t fill the front of the phone to quite the same extent as its rival. Even though its top and bottom bezels could hardly be called chunky, an 82% screen-to-body ratio can’t compare to the Galaxy S10’s 93.1% rating.

Samsung managed this feat by expanding the S10’s 19:9 display north and south, with the front-facing camera now stranded in a sea of screen – a technique that’s been dubbed ‘Infinity-O’. It’s a long screen alright, but it’s nothing compared to the Xperia 1’s 21:9 example. 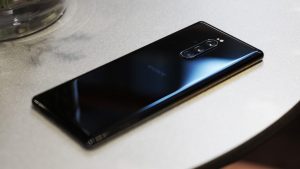 This makes for an incredibly tall phone that towers a massive 17mm above the Galaxy S10. Despite this, the Xperia 1 is only 1.6mm wider than its rival. You could call it a bit of a bean pole, though at 8.2mm thick (0.4mm more than the S10) and 180g (23g more) it’s hardly insubstantial.

For all its unusual dimensions, the Xperia 1 is even more water and dust resistant than the Samsung Galaxy S10. It has a more thorough IP65/68 rating, as compared to just the IP68 rating for the Samsung.

The Sony’s side-mounted fingerprint sensor remains a curious addition, and feels decidedly dated compared to the Galaxy S10’s in-display ultrasonic sensor. Indeed, it’s more in keeping with the lower-priced Galaxy S10e, which also positions its biometric sensor on the right side.

We’ve touched upon the Xperia 1’s stand-out (quite literally) display, but that doesn’t end with its ‘CinemaWide’ 21:9 aspect ratio. It’s also a massive 6.5-inches, which makes it bigger than the Galaxy S10 Plus, let along the 6.1-inch Galaxy S10.

Sony’s screen is also way more pixel-packed. The Galaxy S10 is hardly lacking for sharpness with its QHD+ resolution, but the Xperia 1 is one of very few phones to hit 4K figures. The result is a pixel density of 643ppi, as compared to the Galaxy S10’s 550ppi.

Both displays utilise OLED panel technology, and both make boasts about their HDR and colour accuracy credentials. Samsung is traditionally the OLED king, but then Sony has an impressive history of bringing its cinematic standards to mobile. Creator Mode, in particular, comes from Sony’s CineAlta professional film technology, and outputs cinematic content as close to the creator’s vision and original grading as possible.

Both phones run on Qualcomm’s Snapdragon 855 CPU, though in most territories (including the UK) the Samsung swaps that out for its own Exynos 9820 CPU. Both are just about the fastest processors you’ll find in a non-Apple device. Where the Galaxy S10 gets a slight performance edge is in its RAM allowance, which at 8GB is 2GB more capacious than the Xperia 1.

Both the Galaxy S10 and the Xperia 1 have adopted triple-camera systems, thus moving well and truly away from their respective manufacturers’ longstanding reliance on a simpler single camera solution. Both are led by 12-megapixel dual-pixel main sensors with wide apertures – the key difference being that the Galaxy S10’s main sensor can switch between an f/1.5 and a f/2.4 aperture, while the Xperia 1 has a fixed f/1.6. Both phones also have a 12-megapixel telephoto sensor with OIS and an f/2.4 aperture.

The ultra-wide sensors are slightly different, however. Sony sticks with the 12-megapixel rating and an f/2.4 aperture, while Samsung ramps things up to 16-megapixel and f/2.2 for its wider shots.

Around front the Samsung Galaxy S10 has a single 10-megapixel camera with an f/1.9 aperture. The Sony Xperia X1 goes with an 8-megapixel f/2.0 selfie camera.

With ostensibly similar hardware, it’ll all come down to optics and the two companies’ custom photographic algorithms. Sony, in particular, is looking to throw around its camera and cinema standards here, particularly with video recording via its Cinema Pro app.

Both companies have taken meaningful steps to make their Android UIs more easy to use on these screen-heavy devices. Samsung’s One UI stylishly drags the experience closer to the bottom of the display early on, while Sony similarly places on-screen buttons within reach.

The Xperia 1’s super-tall screen has been put to good use by Sony’s software team, and you can run two apps top-to-bottom in split screen without either feeling too stuffed in.

Traditionally, Samsung goes far deeper in reskinning the stock Android experience. This typically results in a love-it or hate-it experience, with a fair amount of bloat and app duplication, and slower software updates than many.

Sony has stripped its own Android skinning efforts back significantly over years, to the point where it much more closely resembles stock Android than Samsung’s skin. However, Sony too tends to be guilty of packing its phones with home-brewed duplicates and unnecessary bloat.

We’ll have to wait and see if this year’s efforts are any better from both companies.

Sony is providing an intriguing 2019 contender with the Xperia 1, with features like a 21:9 4K OLED display seeming ready to carry the fight to Samsung. But with the Galaxy S10’s unmatched style, all-screen layout and appealing pricing, Sony has a bit of a mountain to climb.