We all know self-driving cars are on the horizon, but exactly how far away is our autonomous future?

Ford has revealed that it believes fully autonomous vehicles will be driving on actual roads as soon as 2020.

We spoke to Don Butler, Executive Director for Connected Vehicles and Services at Ford, about how soon consumers will be able ride in a car with a mind of its own.

“From a technology standpoint, certainly by 2020 we can foresee what we call Level 4 autonomy, which is fully autonomous driving,” Butler tells us, speaking at the CES 2016 tradeshow in Las Vegas. “But in well-mapped areas in well-understood conditions, right?”

Check out the interview below:

But it won’t be us behind the wheel – or lack thereof– initially, according to Butler:

“I think it’s going to be more around transportation services as opposed to individual ownership. I think from that point going forward you’ll see more and more prevalence of these types of services, but I would imagine that a consumer’s first experience with autonomous vehicles would be as part of a ride service, for instance.”

That sounds like bad news for taxi drivers, but Butler says Ford is embracing a future where self-driving cars replace cabbies.

“The way that we look at the situation is: change is coming,” explains Butler. “And we can, from a Ford standpoint, hide in a corner and just hope it doesn’t happen, or we can recognise that it’s happening, embrace it, and understand how are we going to continue to deliver for our customers, whether they own our vehicles, or whether they use our vehicles.” 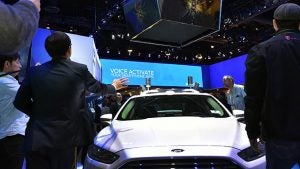 A Ford car with sensor technology at CES 2016

He adds: “Change is coming, we’re at an inflection point in our industry, and from a Ford standpoint, we choose to embrace it.”

Butler describes the risk-reduction that self-driving cars offer compared to conventional driving, saying he’s hoping for a “future that is safer”.

However, he says he doesn’t “really foresee a day” where actual driving will be outlawed to make way for an autonomous-only system.

“I could be wrong. But I just think in terms of mobility and freedom and people’s ability to move,” the Ford lead tells us. “I think it certainly would be overwhelming to say you must now only be driven, you can never drive yourself.”

However, he suggests a system whereby the actual driving of vehicles might only be done in designated areas.

“Do I see a day potentially where driving becomes like horseback riding? Potentially so. And might that be done in limited areas? Potentially so,” Butler tells us. “Might we see a scenario where similar to what’s happening in a lot of major cities, like London, for instance, we have restrictions on the type of driving that you can do, and where you can drive at particular points in the day? Might we see certain zones like that, in terms of autonomous-only? Potentially.”

He continues: “But totally outlawing driving? I really can’t see that happening, but maybe that’s just because I’m a passionate driver myself.”

What do you make of Don Butler’s comments? Let us know below.