Amazon has been granted a patent for a system that attempts to deal with the problem of autonomous vehicles navigating reversible lanes.

The firm filed the patent in November 2015, and had the filing granted this week. It focuses on self-driving cars and how they would operate in a lane where the direction of traffic changes depending on traffic flow.

The system laid out in the filing is applicable to “any type of vehicle, including but not limited to cars, trucks, vans, buses, street cars, helicopters, trains, subways, aircrafts, boats, etc., regardless of how powered or driven.”

There’s nothing in the patent that addresses Amazon developing its own driverless cars, but such a move would make sense given the company has its own fleet of semi-trucks that deliver products between Amazon warehouses.

For the time being, the firm seems to want to solve the reversible lane problem, which poses a bigger issue in the US where such lanes are used on highways to manage traffic flow in and out of cities. 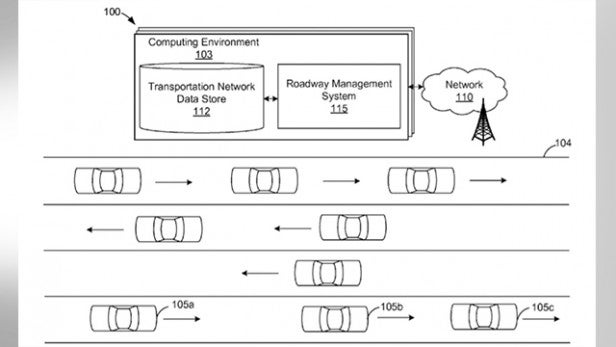 Amazon’s system is also said to be able to work with any carmaker’s vehicles, though the company would maintain control of the system itself.

Beyond the reversible lane situation, Amazon’s proposed centralised system could allow multiple self-driving vehicles to communicate with it in order to coordinate their movements.

It’s been known for some time that the online retailer has been working on developing new technologies for delivering goods, including drones with its Prime Air division.

As Recode reports, one of the inventors listed on the newly granted patent is Jim Curlander, technical adviser at Prime Air.

Let us know what you think of the design in the comments.