Asus’s ZenBook range of high-end consumer laptops have been given a facelift at Computex 2019, sporting new and more power-efficient ScreenPad secondary displays.

As well as being given an overall tune up, a user-interface overhaul, and better power management (first gen ScreenPads could be absolute battery vampires) perhaps the most immediately noticeable addition was the presence of more apps and games, chiefly Candy Crush Saga.

While Trusted Reviews has never been a big fan of King’s wildly successful ‘match three things of the same colour’ puzzler, the game works well enough, and it’s a sign that Asus is serious about the ScreenPad. Hopefully this means more games could be heading to the platform soon. We can’t see Pokémon Go making the jump to laptops anytime, though.

In the meantime, expect social media apps – Facebook, Instagram and Skype apps were all name dropped by Asus representatives – to land on devices bearing the new ScreenPad soon.

Anyway, what else is there to shout about the new ZenBook range and the new and improved ScreenPad 2.0? 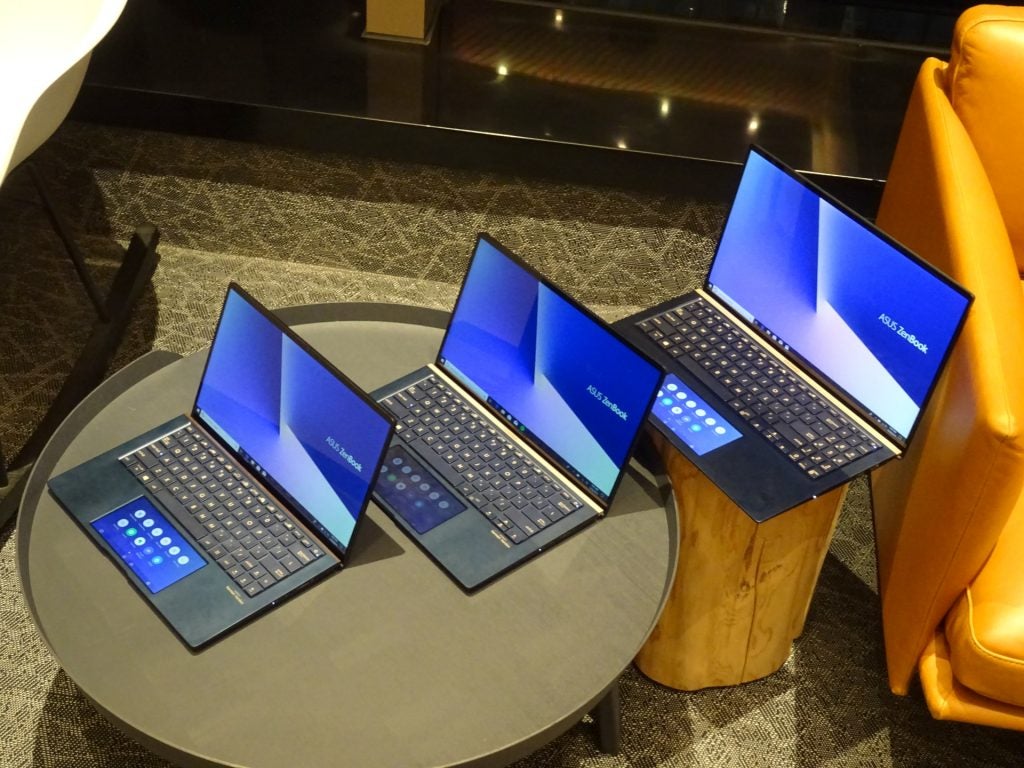 Asus ZenBook price – how much will a 2019 ZenBook cost?

Price information isn’t currently available for the ZenBook range, but as a rule, expect these to be within the £1000-£1500 bracket.

Asus ZenBook Pro release dates – when are the 2019 ZenBook laptops going on sale?

Asus has yet to confirm when we can expect to see new ZenBooks going on sale. 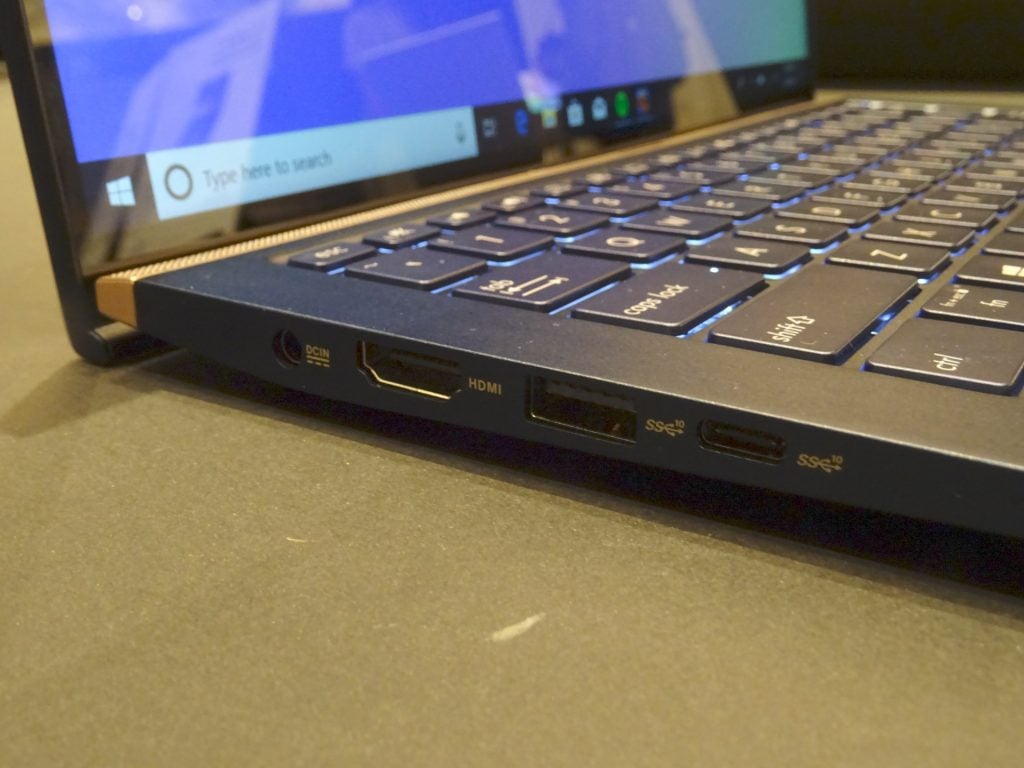 What is the Asus ZenBook Pro and what is ScreenPad 2.0?

Specs and features of the new ZenBook 2019 line-up are thin on the ground. During the very brief time I was able to spend with them, I was not able to even peek at the system settings to see which processors were running things. At a glance, the chassis used here very much look like those sported by the 2018 ZenBook line-up.

At a media briefing, Asus staff were keener to talk up the features of the revamped ScreenPad, so let’s focus on that.

A quick refresher. The ScreenPad – a touchpad which also doubles as a second screen – as a concept was an intriguing one. It gave you a degree of extra control over certain apps, like Spotify and YouTube, but it wasn’t always easy or elegant to use and it could really eat into a battery’s power levels. 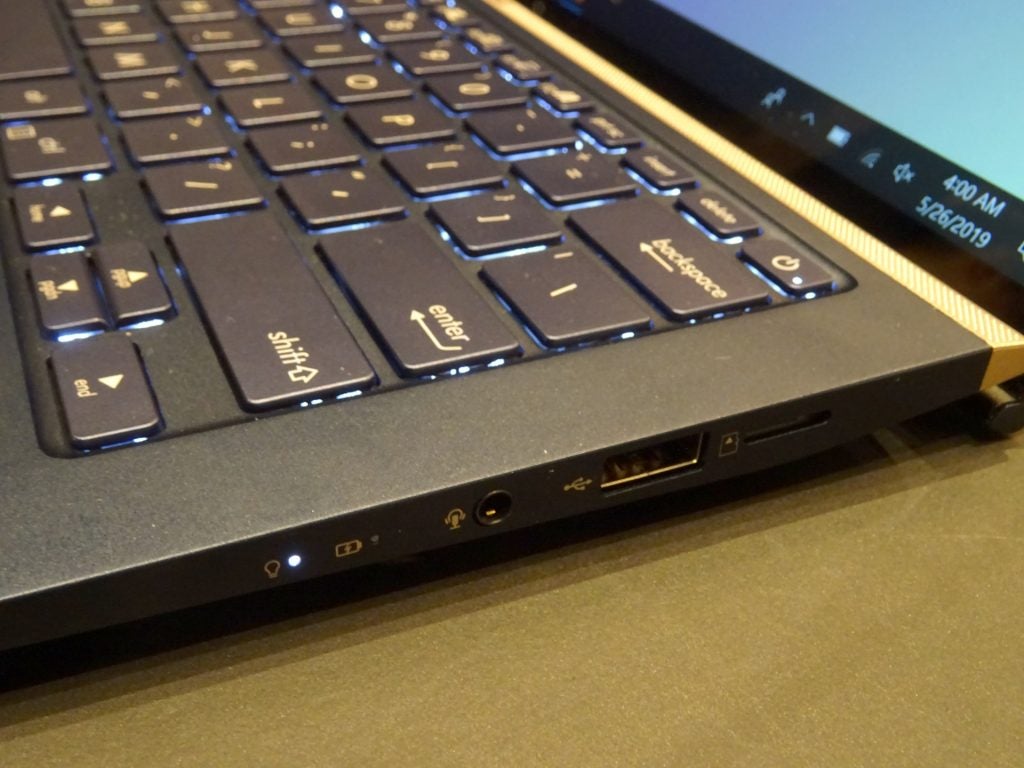 The main reason for this, according to Asus senior director Y. C. Chen, was that the ScreenPad would always draw power from a laptop’s dedicated GPU. Now, Asus has been able to engineer new ScreenPads so that they can get all of the graphical processing grunt they need from a CPU’s integrated graphics, which is much less resource intensive, and therefore less battery hungry. This results, Chen said, in a 2.5x longer battery experience, on average.

Other tweaks to the ScreenPad 2.0 include a user-interface that means you’re able to long-press on an app icon and drag it around the home screen, just as you would on your phone.

Generally, the interface is a lot easier to get to grips with than before. It’s far more fluid than the first version of the ScreenPad, where it felt like menu pathways had to be gingerly explored first and then firmly committed to memory. This feels much more intuitive and natural. Hopefully you won’t have to think twice before swishing through ScreenPad apps and games.

Another thing which wasn’t quite so elegant about the gen-1 ScreenPad was toggling between the various modes – ScreenPad on, a desktop mirror mode, ScreenPad off (while leaving the trackpad on) and trackpad off – required you to cycle through by pressing the F6 key. 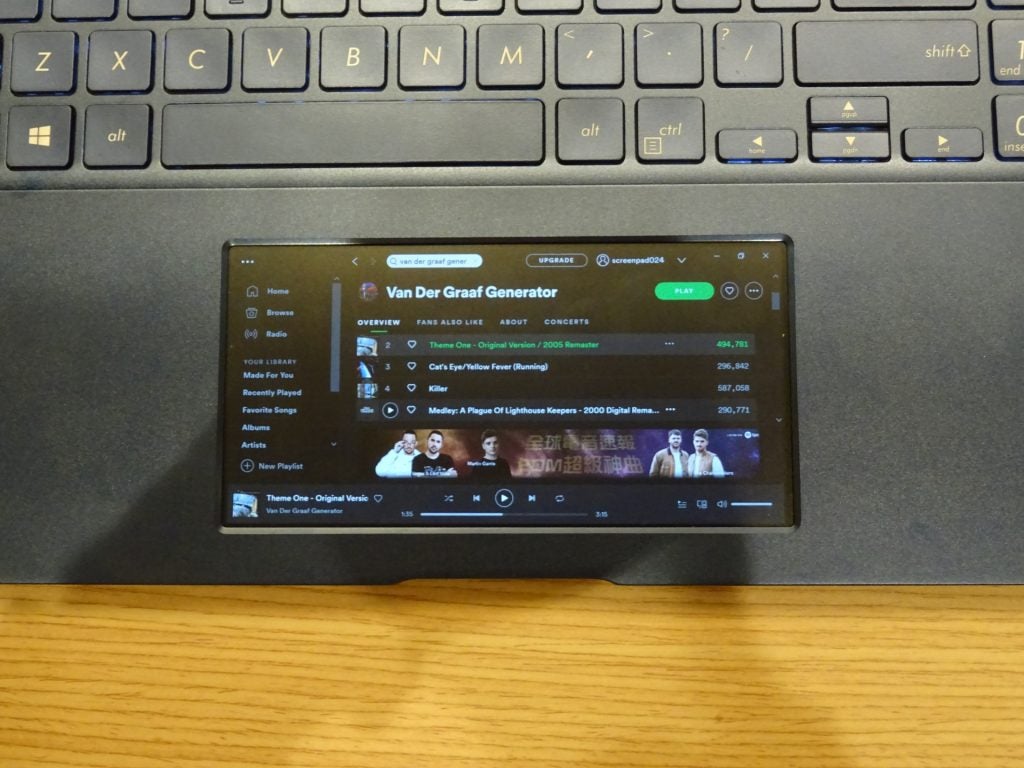 You can still use F6 like before, but now, a three finger gesture will also do the same thing. An improved cursor icon will make it easier for you to use the ScreenPad as a trackpad, without having to shift through the multiple modes. I was able to have more success with this, and felt that if I had more time, I would have been able to get to grips with the new ScreenPad more. That said, the new-look Spotify for ScreenPad simply looks like a scaled down version of the Windows edition, which hardly lends itself to phone like gestures. Hopefully this will have a rethink, with touch as the primary interface in mind, before these laptops go on sale.

As for further ZenBook 2019 specs? Asus staff weren’t able to tell us much more about the processors and graphics units in these new machines – much of the demo was given over to the new ScreenPad tech. Full spec sheets are expected to be released soon.

We’ll update this range guide with more specifications and details like prices and release dates as and when they become available.