We’re back again – the TrustedReviews team is out at the annual IFA Berlin technology trade show, and Asus is among the first to show off its new wares.

Asus’ Chairman Jonney Shih took to the stage to kick off proceedings.

First up is the brand-new Asus RT-AC5300 router, which Shih reckons is the world’s fastest Wi-Fi router for 4K streaming and gaming.

At 5.3Gbps, it’s apparently 67% faster than the previous top-range tri-band solution, according to Shih.

It has an “unbeatable Wi-Fi range”, although we’ll have to put that to the test ourselves. 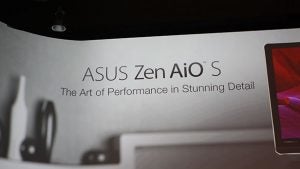 It’s also loaded with some serious specs inside, including a quad-core Intel Core i7 processor, an Nvidia GTX 960M graphics card, 32GB of storage, 2GB of DDR4 memory and a USB 3.1 Type-C port.

All that for 1,499 euros isn’t a bad deal, although for the addition of Intel’s RealSense camera, you’ll have to pay a little more. Pricing hasn’t been confirmed just yet.

According to an Asus spokesperson, the ZenPad boasts a number of tablet “world firsts”.

For instance, it’s purported to be the world’s first customisable tablet, insofar as it’s possible to swap out the back cover. 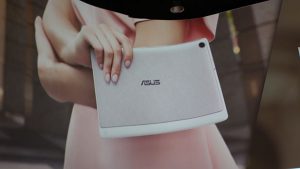 The casing of the device offers up a hairline diamond-checkered pattern, diamond-cut highlights, and an “elegant” leather pattern.

Several cases are on offer, including the Zen Clutch, the Zen Case and the Power Case.

In addition, Asus offers the Audio Case, which features a immersive 5.1-channel surround sound. Six speakers are included, alongside a subwoofer. However, be wary of the seemingly paltry six-hour battery life with this case.

The ZenPad will ship in a range of sizes, all the way up to 10in. Prices begin at 199 euros.

Asus ZenFones – so many phones

Asus also decided to mention the Asus ZenFone 2 Deluxe, which it already launched earlier this month in Brazil.

It’s powered by an Intel Atom processor, clocked to 2.3GHz. That’s paired with 4GB of RAM and 128GB of built-in storage.

Then there’s the ZenFone Max, which will ship with a staggeringly huge 5,000mAh battery. The ZenFone Max can also be used as a power bank.

The next device is the ZenFone Selfie, which offers up dual 13-megapixel PixelMaster cameras. 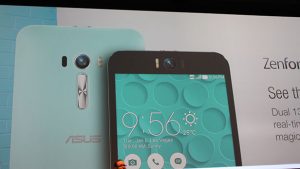 Basically, the whole point is that you shouldn’t have to settle for a lacklustre megapixel count when you’re trying to snap solid pics of your face.

The final handset is the ZenFone Zoom, which is purportedly the world’s thinnest 3x optical-zoom smartphone.

To achieve such high levels of zoom, Asus developed an “innovative” 10-element lens, which it claims has an “intricately calibrated periscope design”.

The ZenFone Zoom is also capable of macro focusing down to an impressive 5cm. An Asus spokesperson claims this is more advanced than the iPhone 6.

The company then proceeded to wax lyrical on the Asus ZenWatch 2, which was already announced earlier this year.

Asus was keen to point out that the device will now be compatible with iOS as well as Android – that’s thanks to advancements with Android Wear.

It also showed off its ‘Smart Assistant’, which integrates with Asus’ Zen UI, to improve notifications for power users.

A more nifty, Apple Watch-esque feature is ZenWatch message, which lets ZenWatch owners send messages and emojis to each other.

The device will also be shipping with 50 “professionally designed” watch faces straight out of the box. 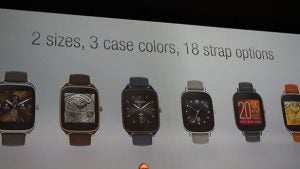 If none of those float your boat, Asus will also be providing its custom-built FaceDesigner app, so you can use your own images to build a bespoke watch face.

And no wearable news would be complete without discussion of battery life. According to Asus, the Zenwatch 2 battery life is 2 days long.

It’s also got fairly nippy charging – an alleged 50% charge in just 36 minutes. That’s not bad at all.

All this will cost you 149 euros when it launches. Unfortunately, that’s the one bit of information Asus declined to reveal on-stage.

Asus also spent some time talking about its Republic of Gaming (ROG) product line-up, which Shih says makes up an equal half of the brand, just as much as the Zen devices.

According to an Asus spokesperson, Asus is number one worldwide in GTX gaming laptops – over 34% market share. 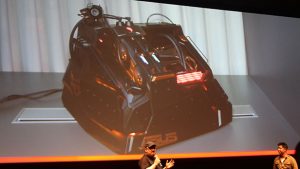 It’s got Nvidia GTX graphics cards packed inside, it glows with a sinister ROG red, and it actually ruddy plays video games. It would probably do alright in Robot Wars too…

Asus also talked up the advantages of Windows 10, and the impact that has on PC gaming.

“The Microsoft lab and ROG lab were coming together to form a partnership,” explains an Asus spokesperson, who added “PC gaming has never been better”.

The spokesperson also lauded the Windows 10 feature that allows Xbox games to be played on PC.

It’s the world’s first water-cooled gaming laptop. Yeah, you read that right. Unfortunately, details were extremely thin on the ground. 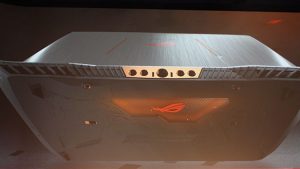 It ships with an overclocked mobile K-Sku CPU on board, and will launch with Windows 10 on board.