The affordable sets were announced at an event in New York on Thursday night. They will go head to head with the Roku TV sets already offering the Dolby Vision HDR standard, which is generally seen to be offer better quality than the HDR10 standard.

The company is already selling a 55-inch Toshiba-branded model which can be nabbed by Amazon and Best Buy for $449.99. Amazon is also planning to sell 50-inch and 43-inch models in the United States, beginning on June 30. They’ll cost $329.99 and $379.99 respectively. With Prime Day just on the horizon, it’s likely these sets will be available even cheaper than they are now.

Amazon’s own Fire TV Stick 4K currently offers Dolby Vision and Dolby Atmos audio, but this is the first time Amazon has added the functionality to TV sets made with manufacturing partners.

The sets still enable users to connect to live-over-the-air TV services beyond the Fire TV interface that offers access to the likes of Netflix, Prime Video, Hulo and HBO.

Naturally they offer 4K Ultra HD visuals where available, but the addition of Dolby Vision HDR make them a much more attractive proposition; especially at this price point.

There’s also 3 HDMI ports, USB, Ethernet and dedicated audio, digital and composite outputs. Amazon and Toshiba are bundling in a quad-core CPU and a multi-core GPU to boost the responsiveness of the user interface, while there’s also dual-band Wi-Fi.

Amazon is also including a Voice Remote with Alexa for controlling functions like power, volume, navigation and input switching. It can also be used to launch specific apps. It’s also compatible with the massive range of Alexa skills we associate with the Echo and Fire TV devices.

It doesn’t appear at this point as if Amazon is planning to sell the television sets in the UK at this time, but we’ll keep you posted. 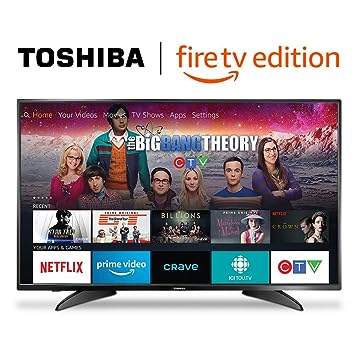