Which is the best Android launcher to download in 2020?

A launcher app is the best way to give your phone a distinct look. By pasting over its software, your device will gain a completely new personality within a tap or two.

There are numerous options available on Google Play, but which should you pick? Some offer a complete visual overhaul, others mountains of customisation. Many offer features missing from standard Android and other custom UIs too.

We’ve tried the most popular Android launcher apps available now. These are our favourites. 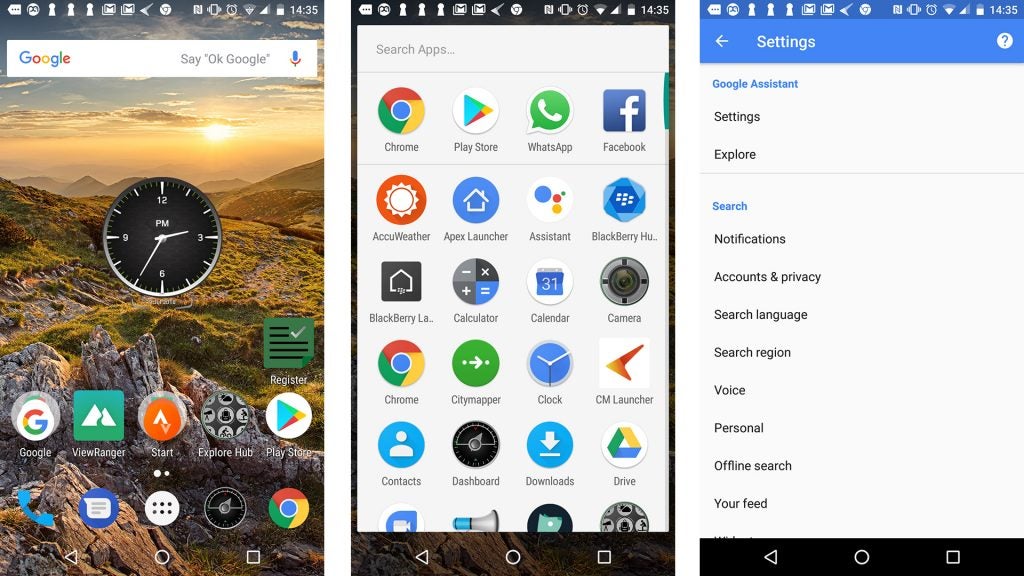 If your phone has a custom interface and you don’t like it much, the Google Now Launcher is the solution. This pastes over your phone’s own interface with one based on a vanilla Android look.

It isn’t the interface you’ll find on Pixel phones; this is the original Android Material look, seen before the Pixel style look over.

However, it remains very clean – and actually a little more fun-looking than Pixel UI. Google Now Launcher is a good way to strip out the unwanted extras in your phone’s software.

Desperate for Pixel UI? You’ll have to side-load it by downloading and installing an APK app file from the XDA Developers forum, for example. If you want the more gesture-based feel of Pixel UI provides, though, there are plenty of other options. 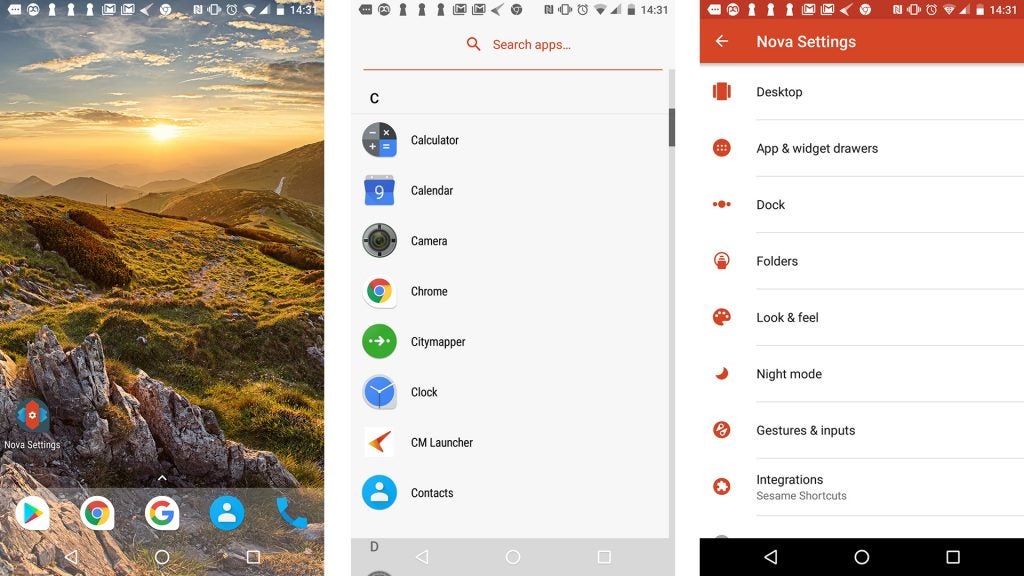 Nova Launcher has been around since 2011, but it has moved with the times far better than most. Its mid-2018 incarnation looks and feels much like an ultra-customisable version of the interface of Google’s own phones.

When you first load it up, you can choose whether to bring up the app drawer with a button press or swipe, and you get to pick either the ‘light’ or ‘dark’ theme. Five seconds in, you’ll have one of the cleanest, most tasteful custom launchers going.

Dig deeper into Nova Launcher’s settings and you’ll find heaps of tweak. There’s a Night mode feature that switches the theme based on the time of day, extreme customisation of font spacing and size, icon shapes and the colour of most elements.

This is much better-looking than the Nova Launcher of a few years ago. You can also choose whether to arrange the app drawer horizontally or vertically, with options for both a Google-style arrangement and a longer alphabetical list.

The paid-for Prime version unlocks features such as app hiding and gesture shortcuts. But most will likely be happy with the freebie Nova Launcher. 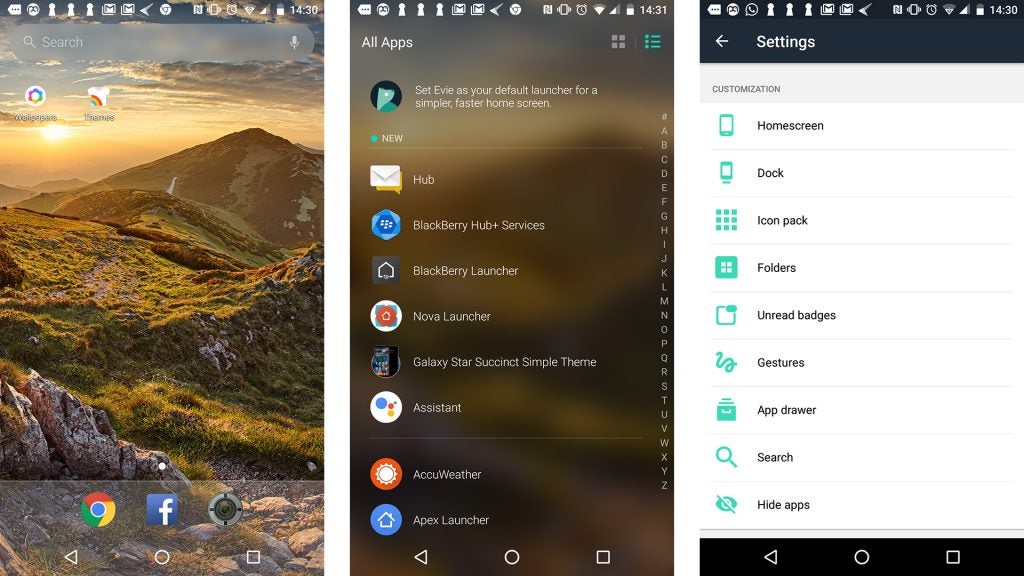 This launcher doesn’t try to ape the look of standard Android. It has its own style, and it’s quite sophisticated.

Of most interest is the app drawer. By default it’s a scroll, similar in appearance to the interfaces of OnePlus and Huawei. You can use a grid of icons too, which can be scaled down to a near-ridiculous 12×12. This will prove handy for owners of big Android tablets annoyed by how little screen space is actually used.

You get the same level of customisation for the homescreens, too.

Evie also supports gestures, for those who want to get advanced. You can make a double homescreen tap bring up the app drawer, for example, or a pinch bring down the notifications reel. You can ‘hide’ apps too, which is a premium feature in rival Nova Launcher. 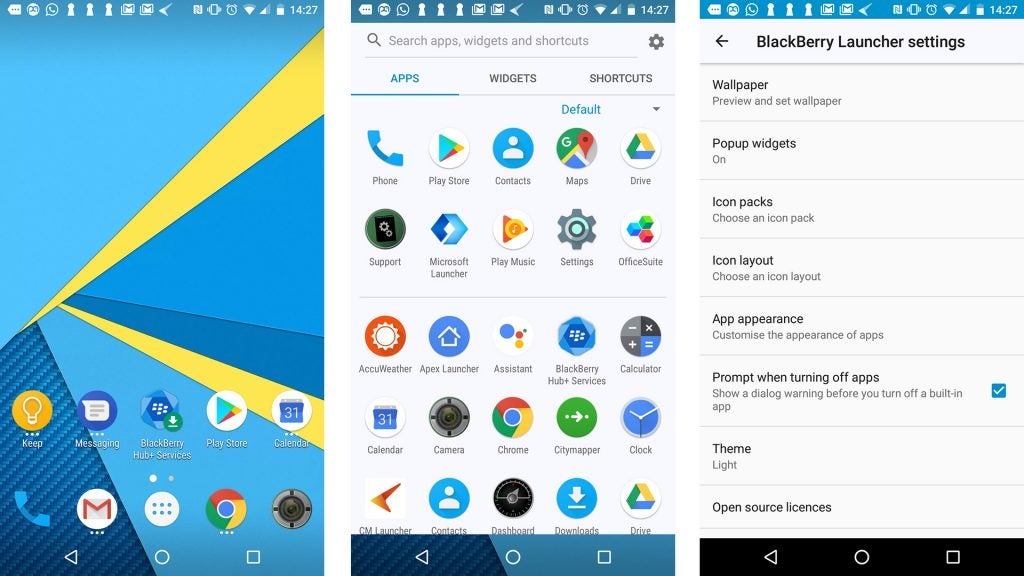 A taste of the BB experience

You can use most launchers without paying a penny. You can try BlackBerry Hub for free, but to get the most from it you’ll need to pay 89p a month for full access.

Paid up, you get ad-free access to the BlackBerry Hub. Note that a fresh free install occasionally dumps an ad on your apps drawer, which none of us want.

However, you get to try out the software feel of BlackBerry’s phones, such as the Key2, without buying one. BlackBerry Hub is particularly interesting, since it lets you look at messages and updates from all your social services in one spot.

The interface itself is quite similar to the default Google design, but with a few extras. For example, you can open up app widgets on the homescreen by swiping up or down on an app icon. 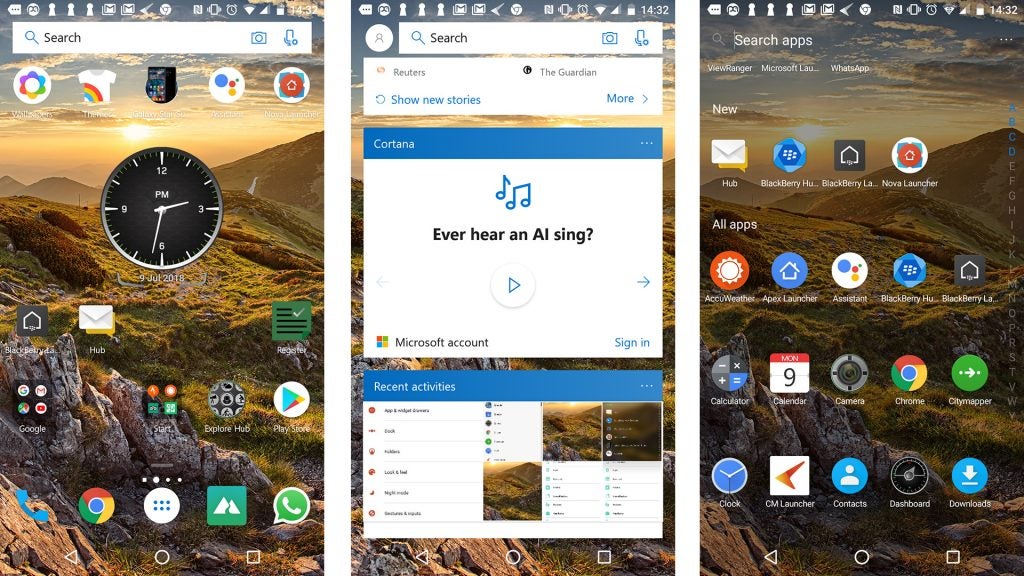 Microsoft may have bowed out of making its own phones, but it still maintains one of the most interesting and polished custom Android launchers out there.

Microsoft Launcher is a good fit for larger-screened Android devices, since it’s able to fit plenty of information and icons on each screen –  and it doesn’t rely on blank white backgrounds to ensure readability is perfect.

You’ll either love or hate Bing wallpapers, which switch up your background regularly from the Bing image archive. This is optional, however.

The shortcut dock is another interesting extra. In a lot of new phones, an upwards swipe from a homescreen takes you to the app drawer. In Microsoft Launcher, it brings up a dock of recently used apps and toggle controls for Bluetooth, Wi-Fi and the airplane mode.

Predictably, Microsoft’s main aim with Microsoft Launcher is to get you to use Microsoft services such as its calendar and Cortana. You’ll see these as part of an update feed homescreen, which sits to the left of your default homepage.

Microsoft Launcher isn’t for everyone, but it does give your Android a completely different feel. 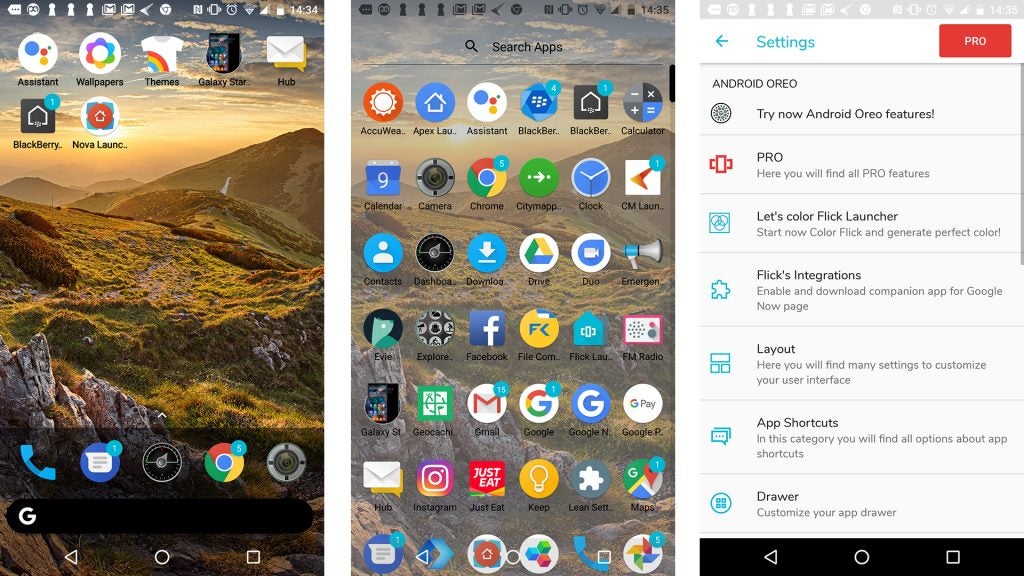 Some launcher apps have been around almost as long as Android itself. Flick Launcher is one of the newer options. And, no surprise, its aim is to give your phone a more ‘current’ style.

Like the interface found on Pixel phones and some other new flagships, it uses gestures to flick between homescreens and apps menus.

It feels like a much more customisable version of Google’s own Pixel UI. For example, you can choose how many rows and columns fit onto the app drawer, and the colour of the translucent app screen background. For the cleanest look, leave it as-is, though.

Flick Launcher also tweaks app notification prompts that sit over app icons, displaying them as a little circle with a number inside. This way, you’ll know exactly the number of new Gmail emails you have left to read.

Pay for the Pro version and you can access extra features, such as app folders that need to be unlocked with a fingerprint scan or password.