There may be plenty of wireless hotspots in the UK but they’re not always that well advertised making it a real pain for mobile workers looking for a quick Internet fix. Windows XP and its zero configuration wireless features make life a lot easier but this still means firing up your notebook to see what’s available. ZyXEL’s new AG-225H could be the answer as this little baby is a combined wireless network locator, 802.11a/b/g USB adapter and access point as well. We have heard the device being likened by some to a wireless sniffer but this isn’t strictly correct as the device merely displays basic information about the networks it finds and doesn’t have the ability to intercept wireless data packets.


The AG-225H is a well designed, pocket sized package that comes complete with a short carrying cord and a USB extender cable. The front panel is home to a small LCD panel and the unit can be powered on and off with a switch underneath, while the two buttons on the upper surface are used to initiate a wireless scan and to scroll through the list of identified access points. It would have been nice if the LCD display was backlit – especially as the unit uses a Li-Ion (Lithium Ion) battery which is recharged whenever connected to a USB port. 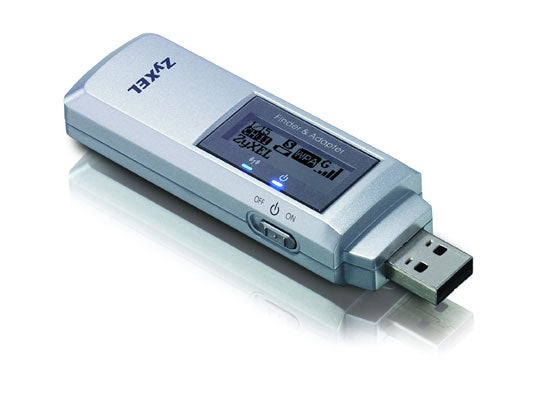 To test ZyXEL’s wireless scanning capabilities we took the device for a stroll round a large two-story office building. Having already scanned the building with an AirMagnet SmartEdge enterprise level wireless sensor we already had a clear picture of how many access points were running and what their details were so we could easily gauge how accurate the AG-225H was. Overall, the results were impressive as the device found all seven of the access points previously discovered. Its range is around the same as a standard wireless PC Card so if the adapter can find an AP then you should be able to log on to it.


The device operates in three modes and defaults to displaying all available APs regardless of their security settings. A Free mode only shows those APs that have no security enabled whilst the D mode locks on to the selected AP and periodically keeps track of it. The LCD display provides plenty of information about each AP as it shows the SSID, the channel in use, whether it is an 802.11a, b or g AP, if WPA or WEP is in use and the signal strength. So if you’re on the receiving end how do you stop your AP from being picked up by the AG-225H? All you need do is switch off SSID broadcasting or turn on SSID masking (whichever method your AP uses) and the AP will no longer appear in the device’s display panel.

Using the AG-225H as a USB wireless adapter is simple enough – you install the drivers and configuration utility first and then plug in the device. The utility is accessed from the System Tray and its icon changes colour to denote the connection status of the adapter. The Network screen provides plenty of information about the current wireless connection and shows the AP’s SSID, whether Infrastructure or Ad Hoc modes are in use, the signal strength and general network IP settings. Profiles are used to manage different AP connections and these can be easily created from the utility to include an SSID and security mode. Usefully, the utility can run a full site survey which displays all discovered APs allowing one to be selected for use in the profile. Wireless security features are extremely good with support for 64/128/256-bit WEP plus WPA-PSK and the latest WPA2-PSK.

To use the adapter as an access point you need to have it connected to a system with the ZyXEL utility installed and linked to the LAN via a wired connection. To swap modes you simply select one from the drop-down menu in the utility interface and it is automatically applied to the adapter. However, there is more to do as the LAN and WLAN connections on the system being used for AP duties must be bridged. Typically, ZyXEL points out in its manual that this needs to be done and then forgets that some instructions and an example might be rather useful. It’s actually fairly simple as you open the Windows Network Connections from the Control Panel and select the LAN and WLAN icons together with the Ctrl key held down. From the Advanced menu select Bridge Connections and a bridge will be automatically created. We found a bridge connection worked fine allowing our wireless test clients to access the internal DHCP server and other resources on the LAN via the AG-225H. Security features are reasonable as you can implement 64/128/256-bit WEP encryption (but not WPA) and enable a MAC address control list.


The ZyAIR AG-225H could prove to be a really handy gadget for mobile users. The access point mode does have some limitations but it certainly impresses as a wireless hotspot locator and USB adapter and comes at a price that’s less than some standard USB wireless adapters.

Multiple profiles can be stored for use with different access points.

You can let Windows manage the adapter and the site survey tool comes in handy when creating profiles.

Access point mode can only be activated from the ZyXEL client utility.

You’ll need to bridge the LAN and WLAN connections before access point mode will function correctly.