There’s barely a day goes by without a vendor releasing the latest and greatest broadband router, which must be really irritating if you’ve just bought one only to see it being superseded before you’ve even pulled it out of the box. ZyXEL offers a huge range of broadband routers but some of these such as the Prestige 660HW on review have been around for a while and have benefited from a regular firmware upgrade program. Here we take a look at this wireless router to see how it stacks up against the new kids on the block.


The router is a compact box with a four port Fast Ethernet switch at the rear along with an RJ-11 port for the integrated ADSL modem and a reset button for returning the unit back to factory defaults. The wireless access point (AP) is endowed with a single aerial and MIMO is not supported. For higher wireless speeds you get ZyXEL’s Wireless g+ SuperSpeed technology which aims to boost 802.11g speeds to a theoretical maximum of 125Mbit/sec. Naturally, you’ll need a compatible PC Card to get any benefits but the 660HW package looks even better value as ZyXEL includes a free G-162 card which supports Wireless g+ and is worth around £30. 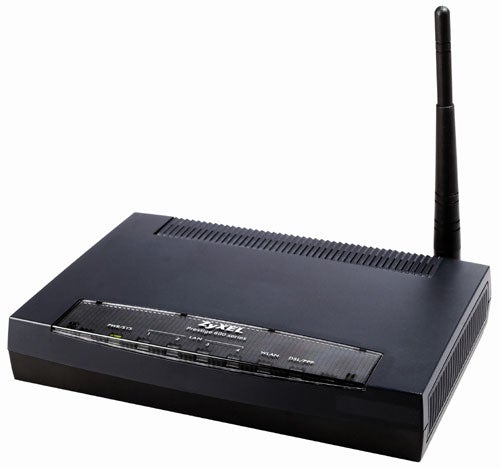 Installation is wizard assisted so all we had to do was enter our ISP details and we were up and running in little over a minute. Sensibly, on the next contact with the browser interface you are advised to change the administrator password and if you don’t it will hassle you every time you log on. The router’s SPI firewall is switched on by default and starts blocking unsolicited inbound traffic immediately. If you want to change its behaviour you can add your own access rules and these can be placed in a list in order or priority.


From the NAT settings you can set up port forwarding rules to allow external access to specific services although watch out if you have residential broadband as sticking web servers and the like on it may no longer be an acceptable practise with some providers. If you wish you can assign a single port number to an internal IP address for forwarding or a range of ports if the server is running multiple services. For the latter you simply provide a start port and an end port and up to twelve separate entries are allowed.


If want to place a VoIP (voice over IP) router on the LAN the 660HW has an ALG (application layer gateway) feature that can handle SIP (session initiation protocol) data allowing it to pass through the NAT firewall unhindered. Basic bandwidth management controls are also provided but these are predefined for six services including HTTP, FTP, VoIP (SIP) and email. All you do is select the service and then assign one of four priorities to it.


Initially we tested the G-162 on a 1.6GHz Fujitsu Siemens LifeBook but the card failed to install correctly under Windows XP SP2 with Device Manager displaying a Code 10 error. We tried this on a second XP notebook and found it worked but only in the lower slot. OTIST makes light work of setting up WPA encryption as the router uses a key entered manually which should match that entered at the PC Card utility. The router then generates a passphrase and automatically sets up a WPA encrypted connection with the PC Card. Performance results weren’t overly impressive with Iometer reporting an average raw read throughput of 35Mbit/sec with an open connection at two metres and 32.5Mbit/sec over WPA-PSK – noticeably slower than MIMO equipped products. 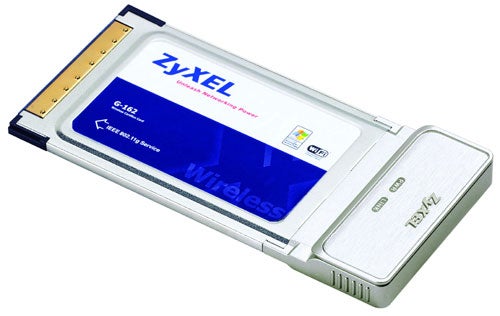 Some vendors can be a bit sluggish in releasing updates but ZyXEL seems to be on the ball as it added support for ADSL2/2+ in the 660HW over six months ago. The latest firmware release doesn’t really add much more than a few bug fixes but from our experiences we recommend extreme caution before you upgrade. We opted to upgrade our review unit with the latest PE.10 firmware but when the router was back in action we had lost our ADSL connection. In fact, the router no longer acknowledged there was even a physical connection with our line. Easy enough to revert back to the previous version except that in our smugness we hadn’t previously downloaded it leaving us in a Catch-22 situation. Fortunately, we were able to use another router to regain Internet access to download the file but many others won’t be so fortunate.


The 660HW looks to offer a good value bundle with the free wireless PC Card included, but we encountered problems installing the latter. Wired and wireless security features on the router are extensive but wireless performance is average and be very, very careful when upgrading the router’s firmware.

Port forwarding can be used to direct a single port or a range of ports to an IP address on the LAN.

Bandwidth management is available only for a predefined set of services which cannot be modified.