Recently, Microsoft has mentioned its intention to bring the entry price for Windows Phone down, so that budget buyers can get involved. This will happen through phones like the ZTE Tania. ZTE is a pro at making fairly high-powered phones that don’t cost the earth, having made the budget classic Orange San Francisco last year. But is this an affordable classic in the making too?

Microsoft’s hardware guidelines are pretty strict, and ensure that the ZTE Tania has the necessary specs to do the Windows Phone 7.5 software at its core justice. Its hardware is just like that of several launch Windows phones from 2010. It has a 1GHz single-core CPU, 4.3in 800 x 480 pixel screen and a 5-megapixel camera, and with any luck it’ll be available as a pre-pay deal for well under £200. 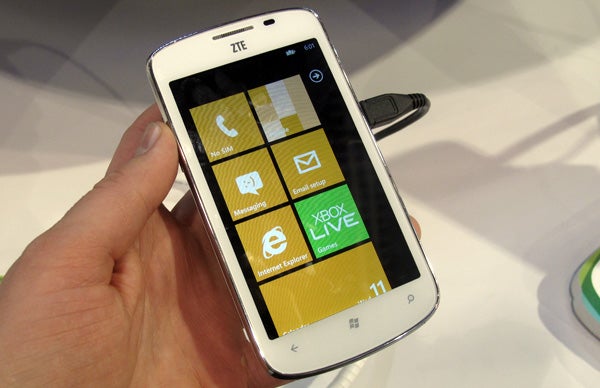 It’s the price that’s key here, because while the glossy white plastic body is sturdy enough and attractive in a rather plain fashion, it doesn’t get near to competing with the aesthetic prowess of the Nokia Lumia 800. By the standards set by ZTE’s previous phones, it fares much better. We loved the Orange San Francisco, but a slightly cheap feel to its plastic body meant it wasn’t going to impress iPhone-owning friends.

Here, the glossy white plastic is only interrupted by a silver plastic band that runs along the phone’s sides. It’s good-looking, but doesn’t have a design definite enough to have its own personality. The ZTE Tania’s dimensions tell a similar story. At just under 11m thick, it’s neither ultra-slim or chunky. It sticks to the middle of the road, but misses all the potholes along the way.

Common to all Windows Phone 7 handsets, the Tania has a physical camera shutter button, microUSB slot on its side and a 3.5mm headphone jack up top. The front is adorned with the three standard nav keys, and they’re touch sensitive rather than the old clicky type. Their icons are nice ‘n’ discreet – although the Tania’s design isn’t hugely memorable, it does have some class. 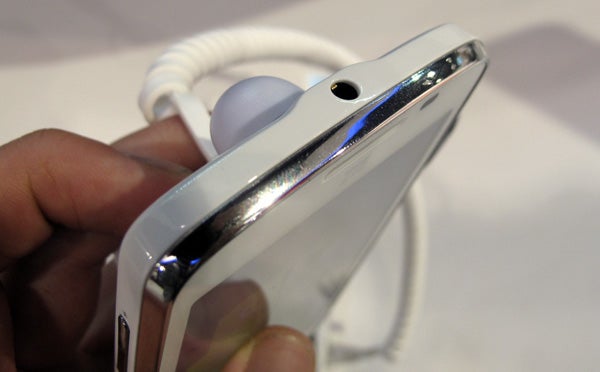 Flicking through the Windows Phone 7.5 Mango OS, we found that – as usual with a Windows phone – operation is very slick. It’s true that most new phones running the OS are faster with their 1.4GHz or 1.5GHz chips, but a simple 1GHz model still does the job just fine. So is there any reason to go for a more expensive handset?

Offering performance comparable to more expensive handsets, the ZTE Tania is starting to sound like a great deal, assuming it’ll come with ZTE’s renowned aggressive pricing. However, its entry-level chops are apparent in its screen.

It uses a simple TFT panel, which doesn’t offer the contrast and black depth higher-end screens can muster. Black areas have a slightly greyish hue, evidence of the backlight shining through. Having just come from checking out the Nokia Lumia 900 and its lovely Clear Black AMOLED display, the difference was clear – although the Tania’s display isn’t that much worse than the 4.3in S-LCD displays of some smartphones. 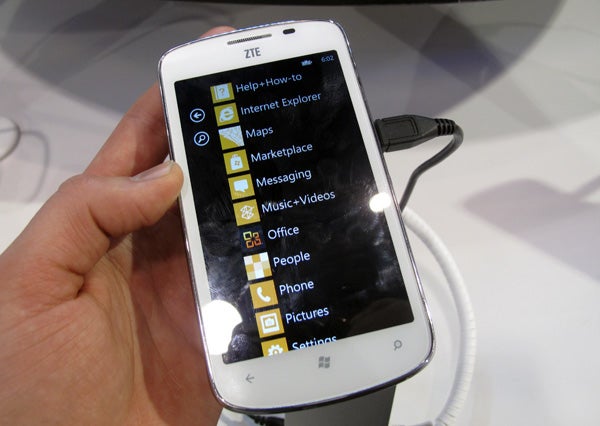 The other compromise is internal memory. There’s just 4GB of storage, and with no way to expand this, it may be an instant deal-breaker for some. If Windows Phone 7 gaming starts taking off, a few 3D titles could suck this 4GB up in no time.

We’re not totally turned off, though. If the Orange-ZTE partnership carries on with this phone – so that  the Tania becomes simply the Orange [insert US city name here] – it will be a very attractive deal if it lands at the right price. The screen’s pretty average by current smartphone standards, but good overall performance and a simple, tasteful design make up for it.

A simple but attractive smartphone that could well become the cheapest Windows Phone 7 device yet, we can see the ZTE Tania driving plenty of sales for the system in 2012. The screen’s not perfect and the 4GB of internal memory is very restrictive, but otherwise it has all it needs to make Windows Phone feel great.