What is the Zotac NEN Steam Machine?

When Valve unveiled its opening wave of Steam Machines, many PC and Linux gamers, myself included, outright salivated at the idea. The tech promised to offer PC gamers a plug-and-play console-like experience, without tying them to any particular system or hardware configuration.

That’s why, on paper, the Zotac NEN Steam Machine is one of the most compelling pieces of gaming tech around. Featuring a robust Intel Core i5-6400T processor and powerful Nvidia GeForce GTX 960 GPU, the Zotac wipes the floor with the Xbox One and PS4, as well as other Steam Machines such as the CyberPower Syber, when it comes to graphics muscle.

However, pricing starts at a hefty £900 and Valve’s fledgling SteamOS has yet to impress, so can the Zotac really deliver on that opening promise?

As a piece of engineering the Zotac NEN is one of the best-looking gaming machines I’ve seen in quite some time. Its white top and black fascia are pleasingly understated and free of the stupid gaudy lights and graphics I see on many gaming boxes.

Even though I couldn’t run the usual gamut of TrustedReviews benchmarks since they’re not compatible with SteamOS, however the internal hardware is pretty good and the components are ones we’ve reviewed individually or in other Windows systems.

The Intel Core i5-6400T CPU is one of Intel’s new Skylake chips and comes with four cores that clock in at 2.2 GHz – though none of the cores are hyperthreaded, so you don’t get quite the same benefits to efficiency. For PCs this is mid-range, but the CPU puts it above the Alienware Steam Machine that we reviewed earlier this year, which comes with an older Core i7-4785T Haswell CPU. 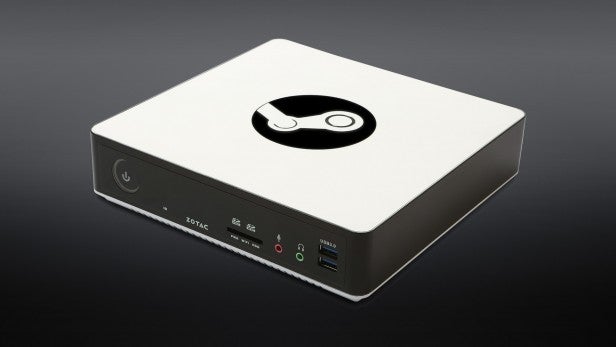 The CPU’s backed by a capable Nvidia GeForce GTX 960 GPU with 1280 CUDA cores and 3GB of VRAM, which should be good enough for general 1080p gaming. It’s also fairly well stacked when it comes to connectivity and comes loaded with two Ethernet ports, four HDMI outputs, USB 2.0, USB 3.0, an SD card slot, a headphones socket and USB-C ports. Storage-wise it comes out of the box with a 1TB 2.5-inch SATA hard drive.

I’m seriously impressed that Zotac’s managed to cram all this hardware into a neat-looking, unassuming chassis that’s close to half the size of an Xbox One. Sitting in my entertainment centre this Steam Machine made my Xbox One look cumbersome.

What’s more, unlike other plug-and-play machines, the Zotac’s upgradable. If you pop its hood you’ll find space to add another 8GB of memory – bringing its total RAM to 16GB – and an M.2 SSD.

The stellar design makes me more forgiving of the Zotac’s hefty £900 price, which is higher than I’d expect from a machine with these specs. You could save over £100 – potentially more if you’re a smart buyer – by building an equivalently specced custom rig.

If building your own gaming machine isn’t your cup of tea, there are also a fair few pre-built rigs that offer the same or superior specs for the same amount of cash. You can pick up the Alienware X51, which features a more powerful and overclockable Intel i7-700K processor, for roughly the same price in most retailers.

The Overclockers Marvel 4K with AMD Radeon R9 390X graphics is £100 less – though it admittedly comes with an older Intel Core i5-4460 processor.

SteamOS is one of the Zotac NEN’s most interesting features. It’s a variant of Debian Linux and aims to offer a console-like experience for Steam gamers. It features a custom full-screen version of the Steam client that’s similar to the Windows app.

The UI features simple shortcuts to the Steam Store, your games library and settings. As an added convenience the OS also updates automatically before it boots, meaning you shouldn’t have to worry about installing software updates or new graphics drivers. 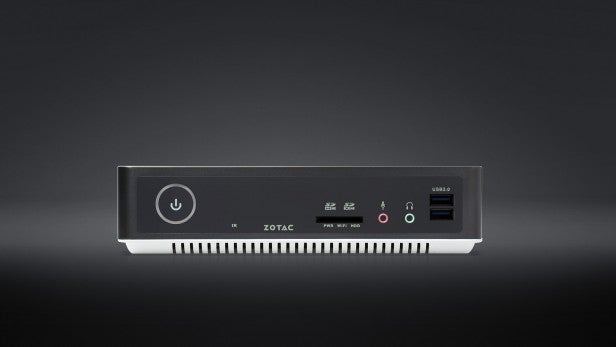 This all sounds great, and in theory means the OS should be a Steam user’s or Linux gamer’s dream. But sadly this isn’t the case. The moment I powered up the Steam Machine I ran into all manner of problems with the OS.

The console setup process is fairly easy and simply required me to connect the Steam Machine to the internet – I used a wired connection, but Wi-Fi is supported – and log into my Steam account. However, from there things went a little less smoothly.

The OS didn’t initially recognise my TV’s built-in speakers. To get the sound working I had to jump into the Steam Machine’s audio settings and manually pick the HDMI output every time I powered up. Getting my soundbar working proved such a faff that I actually gave up trying – for reasons beyond me, the OS didn’t recognise the connection.

My issues escalated when I started trying to install games from my library. I’ve been an avid Steam user since the platform launched in 2003 and have a fairly sizable library of games. However, the number of games I could play on the Steam Machine could be counted on one hand. This is because SteamOS doesn’t have Direct X 12 support. As a result the majority of Steam games, which have been designed to run on Windows, won’t play on the Zotac NEN, or any other Steam Machine.

XCOM 2 was the only modern game I was able to get running on the Zotac NEN. Outside of this I was limited to older titles, such as Left4Dead 2 and BioShock Infinite.

For people who want to play the latest AAA games, this is a serious shortcoming, but there is hope on the horizon, thanks to the release of Khronos Group’s Vulkan API. Vulkan’s a new API that’s designed to make it easier for developers to create cross-platform games. It’s compatible with SteamOS and means that, if developers get on board, more games should appear on Valve’s platform in the near future. 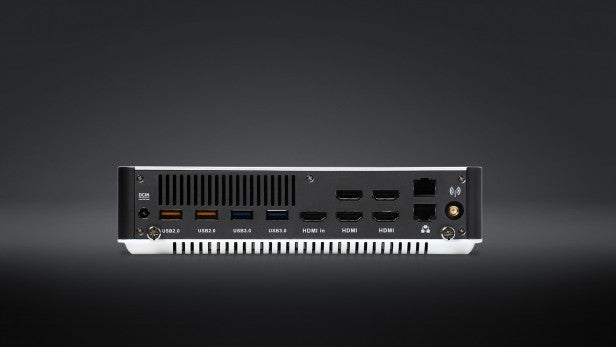 SteamOS also doesn’t feature the same non-gaming app offering as the PS4 and Xbox One. There’s no dedicated apps for key services like Netflix or BBC iPlayer. If you want these you’ll have to enter SteamOS desktop mode, which presents a more traditional Debian UI, and power up the web app versions using the OS’s web browser – which, let’s face it, is a bit of a faff.

Once I got games running on the Zotac NEN, things picked up. XCOM 2 ran on the Steam Machine smoothly at 1080p with the graphics settings at mid-level.

Left4Dead ran with its settings maxed. BioShock Infinite, being CPU-heavy, ran smoothly at 1080p with high graphics settings. I also didn’t notice any of the visual artefacts being reported on some Steam forums when playing games on the Zotac NEN.

I was also impressed by how quietly the Zotac NEN ran. Even with prolonged gaming sessions the Zotac NEN’s fan and heatsink cooling system ran quietly – to the point that they made the Xbox One sound like it was murdering a cat when running. 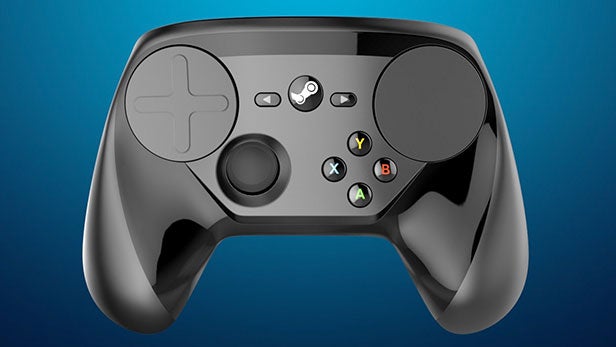 The Steam Controller is another positive. The Zotac NEN comes bundled with Valve’s custom controller, which costs £40 on the official Steam Store. The controller is an interesting beast that feels like the mongrel child of an Xbox One controller and a Razr gaming mouse.

It has two circular touch panels that take the place of regular joysticks and panel controls on its rear, backing up the standard assortment of X, Y, B, A and top bumper buttons.

What makes the control interesting is the fact that you can customise what each button does on a game-by-game basis. For example, in XCOM I created a custom control scheme that included shortcut keys for things like overwatch and throwing grenades. As an avid tinkerer the ability to create custom control schemes is a big positive, especially during competitive multiplayer matches.

But what made the control truly great is the fact that SteamOS lets you save and share any control scheme you come up with. This adds a social element to gaming on SteamOS that’s lost on most consoles. I started playing XCOM 2 on the Zotac NEN the day it was released, which meant there wasn’t an existing control scheme for the Steam Controller.

Within hours a community had developed and begun working on a control scheme that made my cobbled-together attempt look outright archaic. It’s this sort of camaraderie that makes the Steam community great and I’m glad to see it continue on SteamOS. 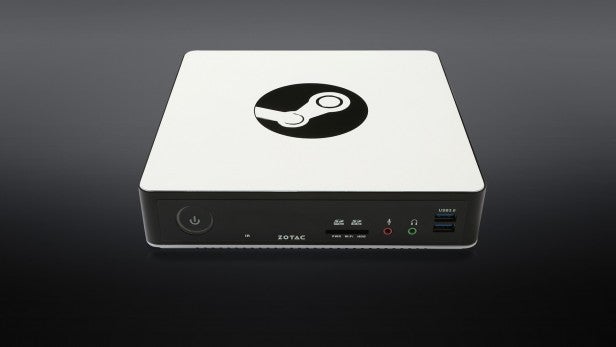 Should I buy the Zotac NEN Steam Machine?

If you’re hell bent on buying a Steam Machine, the Zotac NEN is a solid option. It’s a well-built gaming machine that manages to pack a surprising amount of hardware into a tiny frame.

It also runs surprisingly quietly and is nowhere near as gaudy as competing Steam Machines, like the CyberPower Syber or Alienware Steam Machine. All in all it’s hard to fault the Zotac NEN as a piece of hardware.

But for now I’d recommend avoiding SteamOS. Valve’s operating system feels underdeveloped and under-supported, for now at least. With the release of Vulkan this could change soon, but with that API only just out, and the Zotac NEN costing a hefty £900, that’s an expensive gamble.

As a result, for now I’d say if you want a plug-and-play console experience you’d be better off investing in a PS4 or Xbox One. If top-end performance is your game, then you’d be better off spending the extra cash on a high-power Windows 10 gaming PC, such as the Chillblast Fury Nano.

The Zotac NEN is a great bit of hardware that’s let down by SteamOS.