What is the Zotac MEK1?

There aren’t many companies with as much experience as Zotac when it comes to small-form-factor PCs. The firm has been building exceptional systems for years, so we were excited when the Zotac MEK1 arrived on our test bench.

This mini-ITX rig is a little larger than many of Zotac’s previous systems, but it’s also far more powerful. That’s because the MEK1 has been built to deliver high-end gaming in a package small enough to take to LAN parties.

It certainly looks the part PC. Parallel bands of RGB LEDs run from beneath the base, up the front of the machine and across the roof. The case is rather angular, with vents seen all over the machine. Zotac says that the design is inspired by robots and ‘mechanical anatomy’, and we can certainly believe it.

Via Zotac’s Spectra software, those RGB LEDs can be adjusted to display different colours and lighting modes, and the rest of the exterior offers solid versatility. A door at the front of the machine hides the power button, USB ports and audio jacks, and at the rear there are four USB 3 ports, five audio jacks and dual Ethernet. Sadly, there’s no USB 3.1 Type-C. 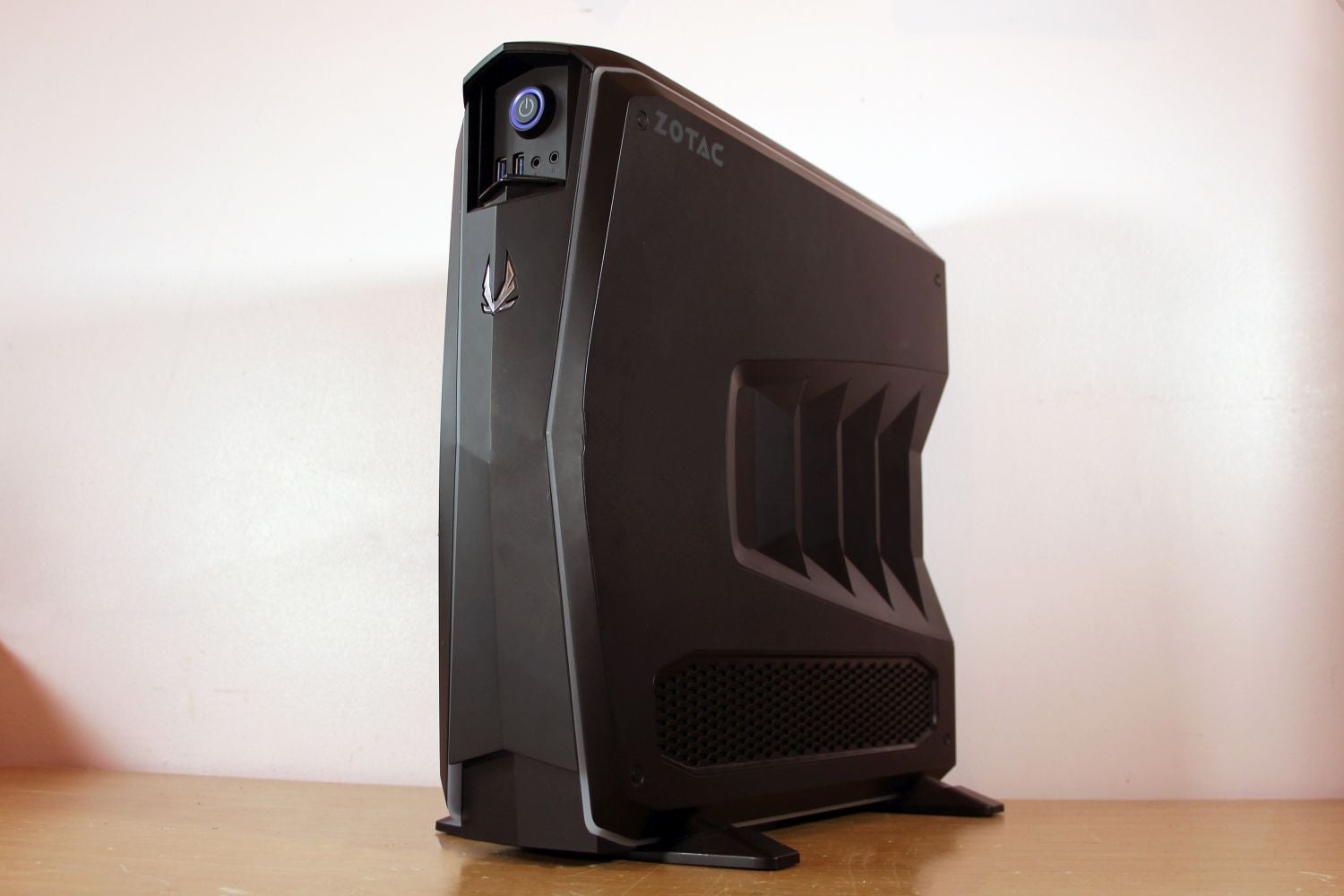 The Zotac can lay on its side – handy for slotting the MEK1 beneath a TV – or it comes with a couple of feet so can sit vertically, too. It’s strudy with those feet attached, and build quality is good throughout. The side panels are plastic, but they’re solid, and bolstered by a strong metal skeleton beneath.

Zotac’s machine weighs 8.9kg, so it’s relatively easy to put inside a sturdy backpack and carry around. It’s 418mm tall and just 118mm wide, so it’s far more compact than most gaming systems. In fact, it’s hardly bigger than some consoles. Even when its feet are added, it’s barely measures more than 200mm across.

However, building a strong, compact system always involves a degree of compromise – and Zotac has clearly opted to design the MEK1’s internals around function and not form. The processor sits beneath a plain, low-profile heatsink, and there’s a modest power supply to the side. Coloured cables trail through almost every gap. A daughterboard sits at the top of the case and hooks up the lighting.

The motherboard sits towards the bottom of the chassis, and on the other side an extension cable is used to connect the full-size graphics card to the board’s single PCI Express slot. The board itself is a basic Zotac model, missing extras or high-end gaming features, but this is hardly a surprise in a system that isn’t really designed for tinkering. 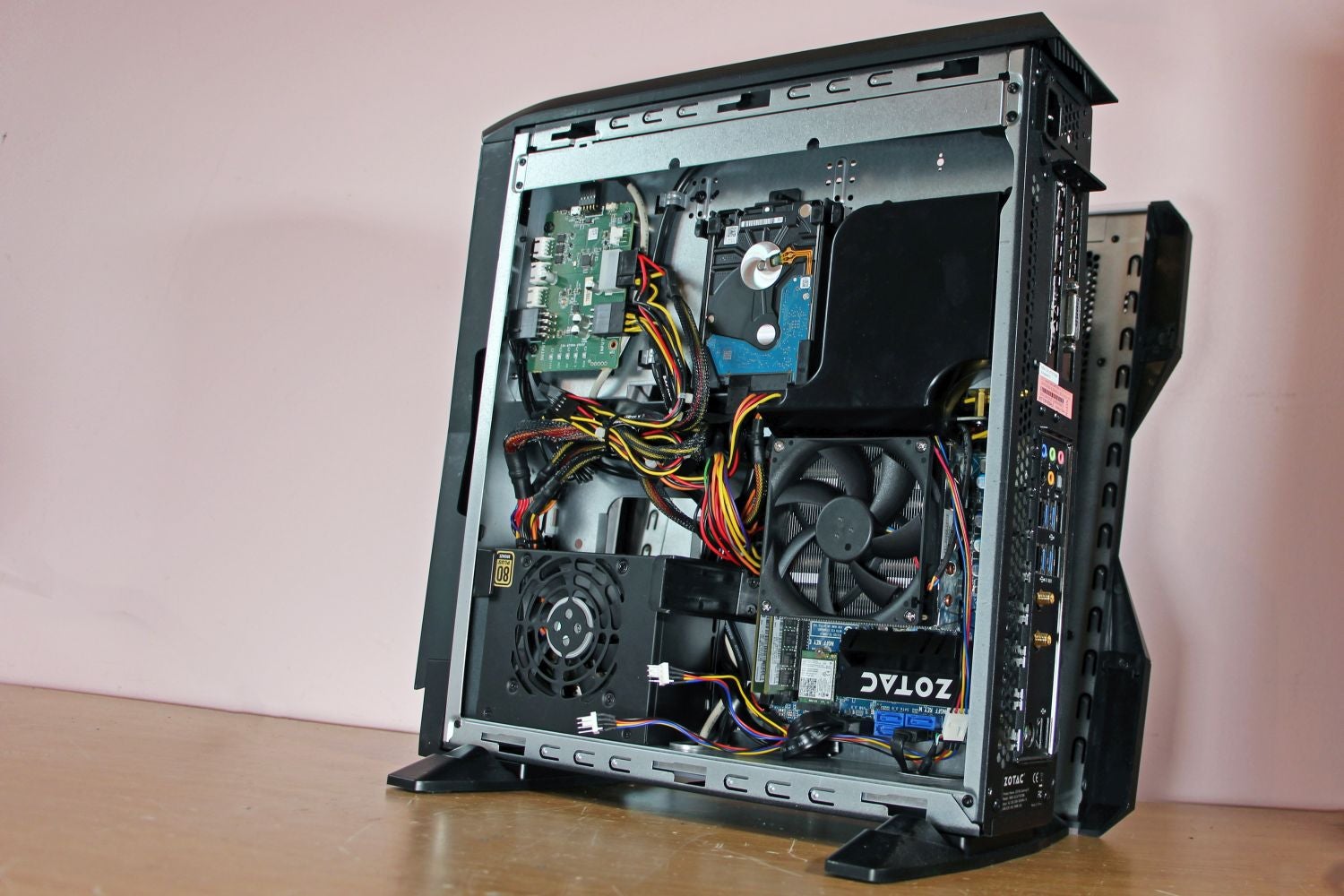 There’s plenty of metal and cabling on the inside, which makes it tricky to get to the graphics card, hard disk and memory. The processor can be reached beneath its petite cooler, but this remains difficult. Repairing or replacing any of the MEK1’s components will prove tricky.

The Zotac MEK1 is diminutive and sturdy, but it loses out on many features compared with a full-sized desktop. Those rigs will have full-size motherboards featuring a greater number of slots and sockets, better cooling and more space for future upgrades. If you do have the space and aren’t fussed about travelling, then you may benefit from the extra versatility of an ATX machine.

The Zotac MEK1 may be smaller than most systems, but it has plenty of graphics power. A full-size GeForce GTX 1070 Ti is included in the MEK1, which means you get the full desktop allocation of 2432 stream processors and 8GB of GDDR5 memory. That isn’t far off the GTX 1080, which has 2560 processors and GDDR5X memory.

The GTX 1070 Ti inside the Zotac runs at its stock speed of 1607MHz, which means that the card can boost at 1800MHz and beyond. The lack of overclocking is no surprise – thermal pressures will be arise in a small system without any unnecessary overclocking.

The Zotac’s GTX 1070 Ti will handle any current game on a 1080p display. It zipped through Rise of the Tomb Raider and Middle-earth: Shadow of Mordor with averages of 106fps and 129fps, and it handled Deus Ex: Mankind Divided at 64fps.

It’s a good performer at 1440p, too. With Tomb Raider running at its toughest settings at 1440p the Zotac averaged 79fps, and it hit 95fps in Shadow of Mordor. Deus Ex is a tougher test, and it managed a score of 53fps with the game at Very High settings. It played other top titles at this resolution, too: it ran Witcher 3 at 63fps and Fallout 4 at 59fps. 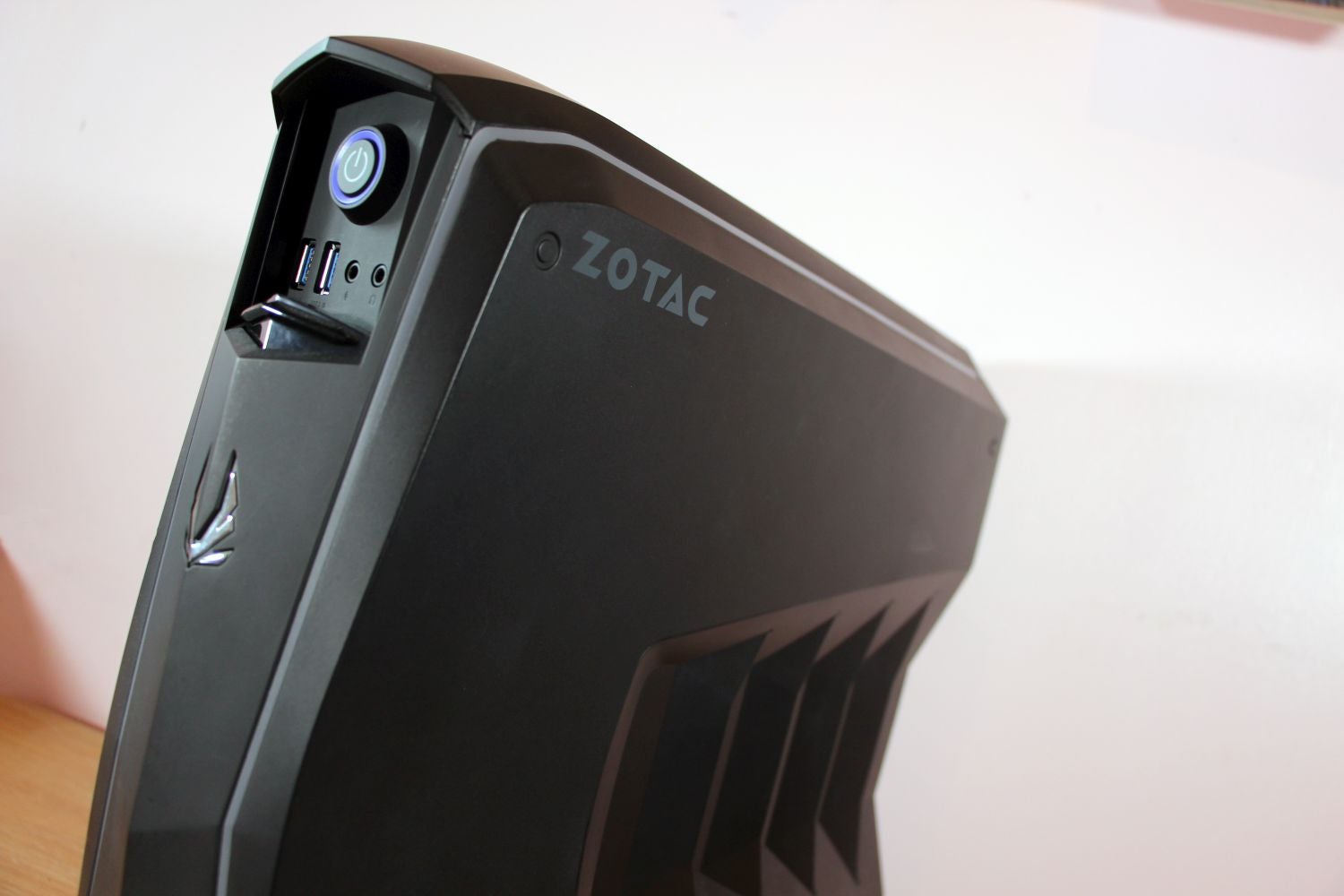 In some games you’ll have to tweak settings to get smooth playback at 4K. Elsewhere, though, the tiny Zotac is very impressive: it will run anything at lesser resolutions, and can handle VR headsets too.

The full-size graphics card is paired with an Intel Core i7 processor. However, the Zotac MEK1’s smaller size means that the chip included here isn’t as muscular as the parts found inside some rival systems. 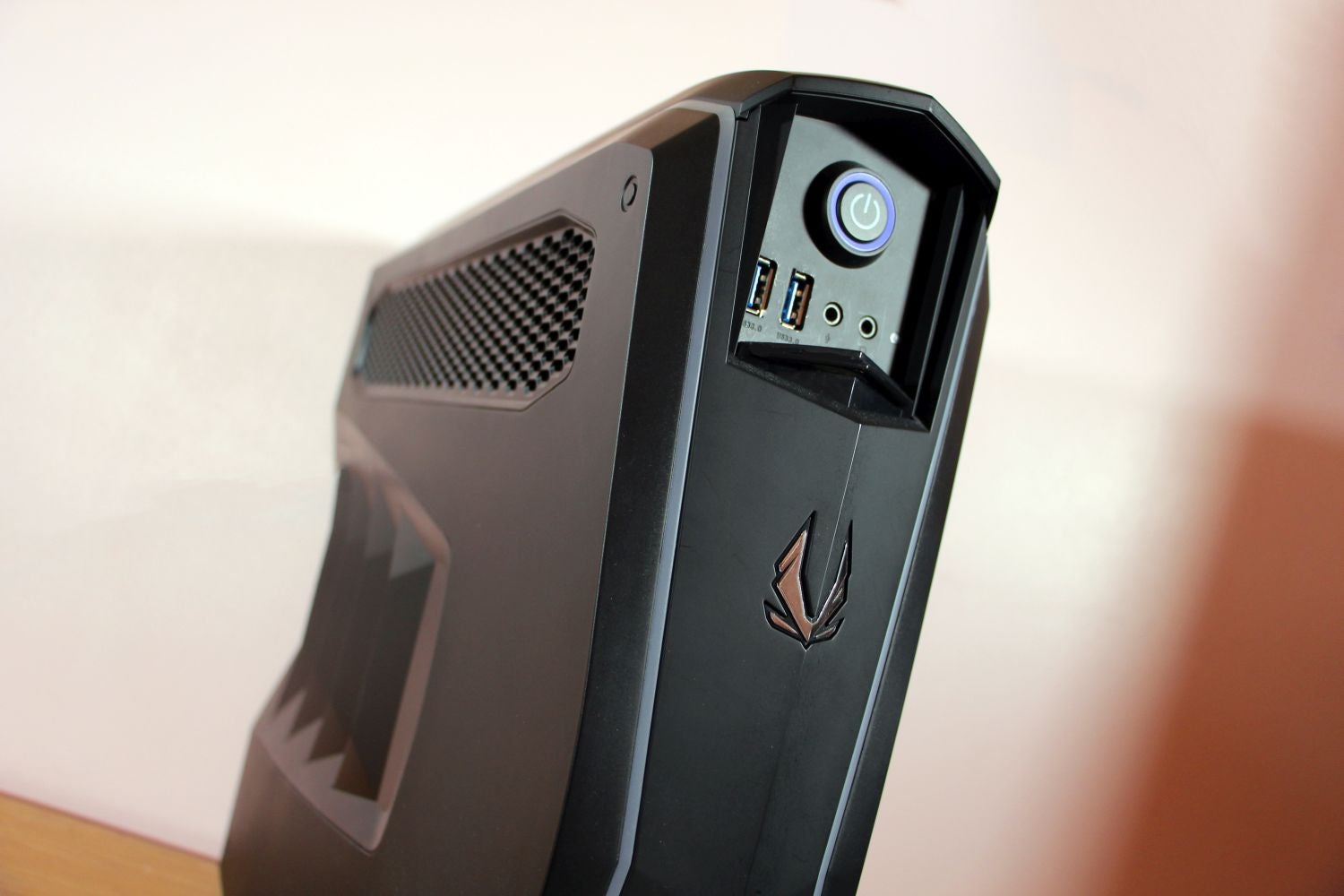 The Core i7-7700 is a Kaby Lake part, which means it has four Hyper-Threaded cores rather than the six cores that are the norm in the Coffee Lake range. And the i7-7700 doesn’t have the K suffix, which means it’s a little slower than some of Intel’s more popular chips; it runs at 3.6GHz and has a Turbo peak of 4.2GHz, while the i7-7700K starts at 4.2GHz and rises to 4.5GHz.

Still, the i7-7700 remains easily fast enough for gaming and applications, and it’s bolstered here by 16GB of memory clocked to a reasonable 2400MHz.

The Core i7 chip returned single- and multi-threaded scores of 4611 and 14,765 in the Geekbench tests. The former figure is only a few hundred points behind top-tier Coffee Lake chips, but the multi-threaded benchmark offers only about two-thirds of the pace of a current Coffee Lake i7. It’s also about 3000 points behind a Core i7-7700K and an eight-core Ryzen part.

The i7-7700’s lesser application performance won’t impact on games, but it could prove problematic if you want to use this machine for streaming, high-end photo work, or video creation. If that’s the case, a system with a beefier processor should be a priority. 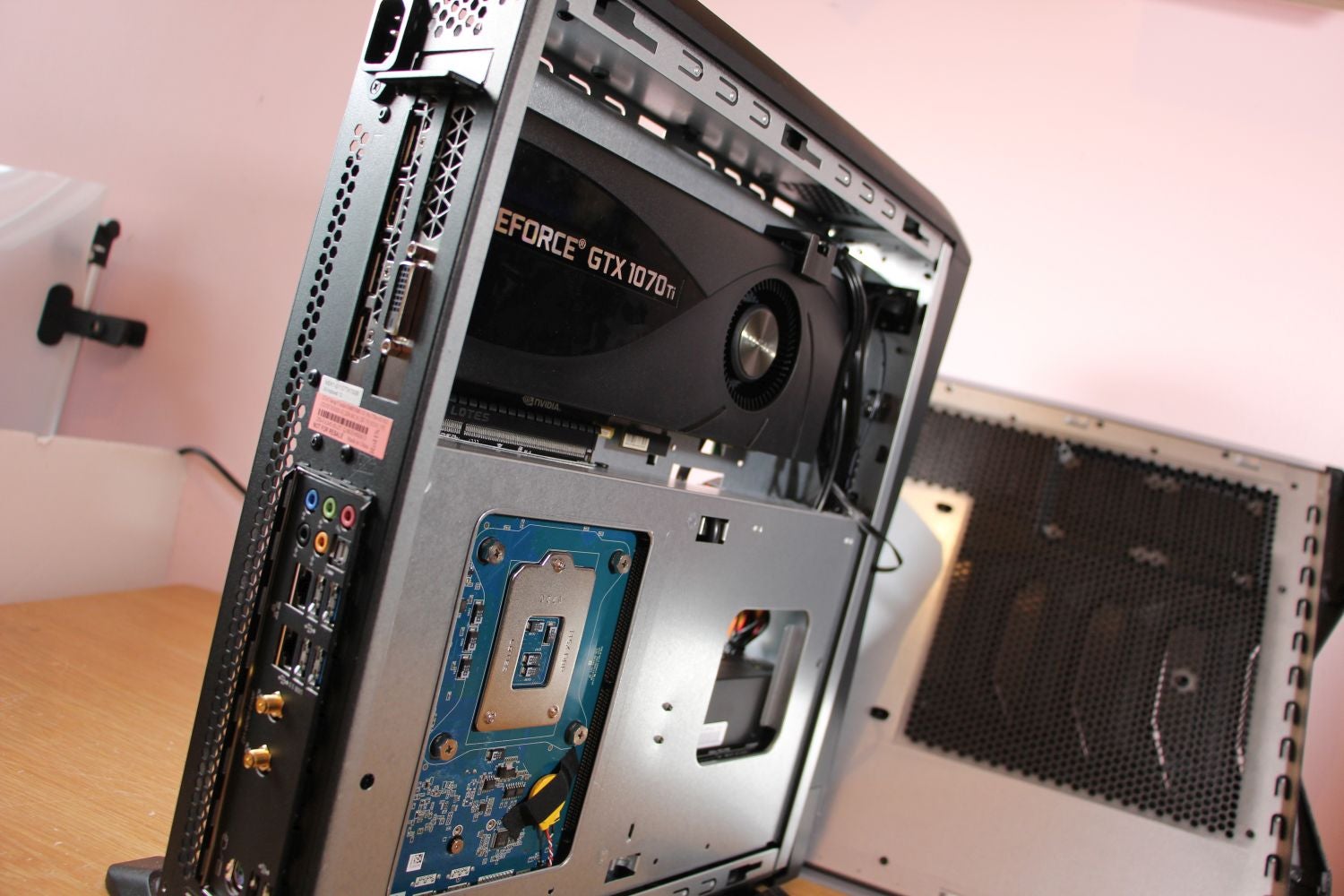 The SSD, meanwhile, served up read and write speeds of 2744MB/sec and 1552MB/sec. They’re solid results and won’t cause the Zotac to feel sluggish – but a few other drives are certainly faster.

There’s a lot of hardware inside this compact system then; nevertheless, the MEK1 performed well in thermal tests. The processor and GPU peak temperatures 86°C and 81°C are fine, and the fans churned out only a low, quiet rumble during our most demanding benchmarks and stress tests.

It’s easy to counter the noise with some decent speakers or via a headset, and we’re impressed that the Zotac is frequently quieter than many full-size gaming machines. There were no throttling issues, either, with the GPU regularly running at 1800MHz during intense gaming sessions.

Why buy the Zotac MEK1?

The Zotac MEK1 isn’t as small as some of the company’s previous machines, but that means there’s more room to cram in some high-end gaming power. The GTX 1070 Ti is a potent card that will handle anything short of 4K – including VR headsets.

The Core i7 processor is fine, there’s plenty of memory, and the storage is rapid. And, impressively, the Zotac handles the latest games without making too much noise or producing too much heat.

There are inevitable downsides. It’s tricky to get inside this machine, and there’s no room to grow – issues that you wouldn’t encounter on a full-size ATX tower. A tower machine would likely be a little cheaper, too.

If you’re searching for a compact system for a cramped room or for LAN parties, however, the Zotac MEK1 is an excellent option.

The Zotac MEK1 deploys a GTX 1070 Ti graphics card to deliver enough power for almost all gaming tasks. It loses points for versatility, but it remains an excellent option if you need a small, powerful gaming system.