A couple of weeks ago we took our first look at the GeForce 9300M chipset which marries support for Intel Core 2 processors with integrated graphics that are similar in performance to the GeForce 8400GS. The motherboard in question was the Asus P5N7A-VM and now it’s time to take a second look at the 9300M with the GF9300-A-E.


This is the first motherboard we’ve seen from Zotac so it will be interesting to see how this relative newcomer does with its first forays into this highly competitive market.


We estimated that the Asus P5N7A-VM would sell for £80-£85 and surprisingly it still hasn’t appeared on sale in the UK so we’re glad to see that the £82.67 price of this Zotac is slap bang in the middle of that estimated range. 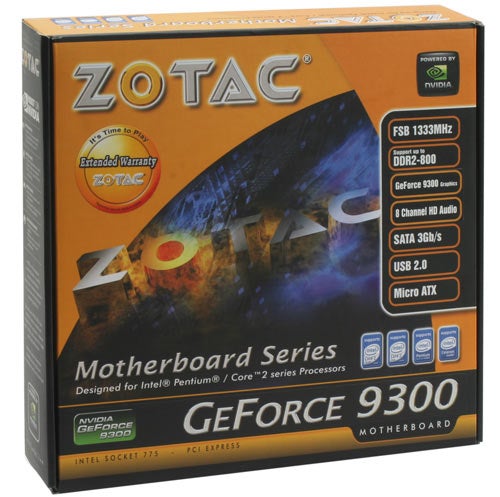 It also means that we shall be comparing the Zotac and Asus every step of the way as the list of features is inevitably very similar. Including, perhaps most importantly, the speed of the graphical components, which both stand at 450MHz core, 450MHz memory and 1,200MHz for the Shaders.


First impressions of the Zotac are very favourable as the deep brown PCB looks classy and the colour scheme on the memory and expansion slots is fairly restrained. More importantly the layout is simple yet it still works well as the two power connectors are arranged along the top edge of the board which in turn frees up a fair amount of space on the side of the board where you would usually find the ATX connector.


This space is filled by the IDE connector which doesn’t need to be laid down as it sits outboard of the memory where the ribbon cable can do no harm. The floppy connector sits at the foot of the board which isn’t ideal however we suspect that most people won’t install a floppy drive so the location of the connector is, arguably of little consequence. 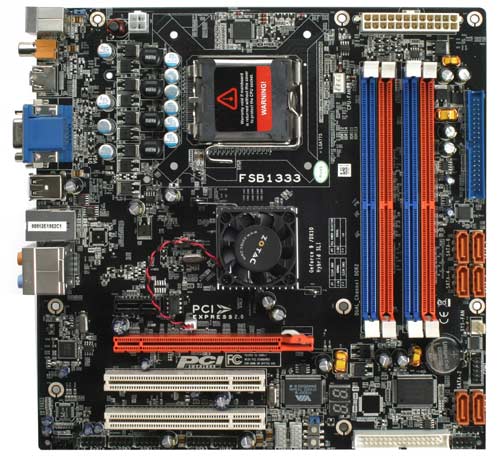 Zotac has chosen to fit six internal SATA connectors with RAID instead of cutting the number and adding one or two eSATA ports to the I/O panel. Do you want four hard drives in your small, highly integrated PC? No, we thought not.


One clear difference between the Zotac and Asus is the use of a tiny 36mm diameter fan on the chipset cooler. We generally prefer that chipsets should be passively cooled to keep the noise down but Nvidia tends to make silicon that runs rather hot and we were happier once we had a case fan blowing across the passive cooler on the Asus. Tiny fans often emit a high pitched whine but the fan on the GF9300-A-E was pleasingly quiet throughout our testing.


According to the Zotac website the GF9300-A-E supports 16GB of DDR2 RAM while the manual refers to 8GB but we doubt that many people will install more than 4GB, so the exact figure is moot.


Zotac has added a handful of extras in the shape of Power and Reset micro buttons and a diagnostic display, which together should make overclocking or diagnosing initial problems a little easier. Unfortunately, it’s not quite as good as it sounds as the two buttons aren’t labelled and we couldn’t find a list of debug codes in the manual, making the diagnostic display about as useful as a proverbial vessel. It’s just as well the motherboard behaved flawlessly, then.

It’s a similar story when you turn to the I/O panel. At first glance, it looks good, as the integrated graphics has HDMI, DVI and VGA outputs, but the Asus also includes Display Port, which doesn’t feature on the Zotac. There’s also a glaring issue on the USB front as the Zotac only has four ports which are arranged in two closely spaced pairs that are next to the graphics outputs. You may – possibly – be able to use all four ports but we reckon it will take some planning. In fairness there are headers for eight more USB 2.0 ports so you should be fine, provided you have some case mounted USB. What you do get, however, is a Firewire port, courtesy an included bracket along with a header on the board. 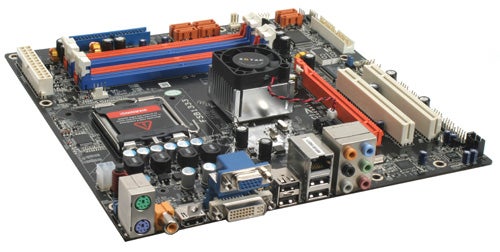 The CD installer is very basic and merely offers drivers for the chipset, HD audio and Gigabit Ethernet connection. There is no software on the CD apart from a BIOS flashing utility and the manual makes for grisly reading as it refers to a bootable floppy and DOS commands. This seems quite unnecessary in late 2008 and we would prefer to see either Windows based BIOS updating although or an updater that built into the BIOS. The absolute minimum that we can accept would be instructions to create a bootable USB memory key as this talk of floppy disks is beyond the pale, especially when you recall that we have already written off the use of a floppy drive with this motherboard. 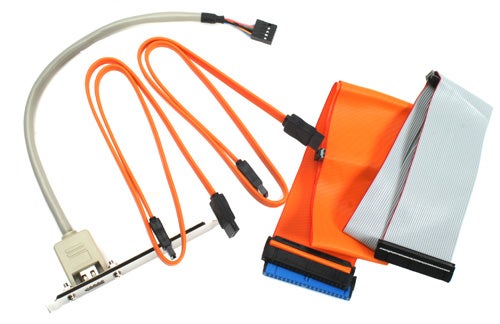 We tested the Zotac with the same Core 2 Duo E8500 CPU and GeForce 8800GT graphics card that we used with the Asus and found that performance at stock speed was identical on the two motherboards, just as you would expect. Surprisingly, however, we found that the Zotac drew 15W less power than the Asus at idle and 10W less under load.


The BIOS appears quite friendly to the overclocker although the memory voltage has a limited range from 1.9V-2.1V and the voltage range is 1.2V-1.55V for the Northbridge. We used the unlinking feature to separate the front side bus and memory speeds and keyed in a memory speed of 1,066MHz however that caused the system to refuse to POST so we kept things simple and worked on the front side bus, to boost CPU speed. 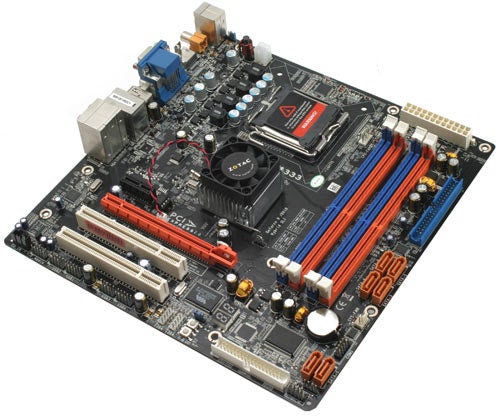 Starting from 333MHz we overclocked the CPU to 3.56GHz on a front side bus of 375MHz which increased system performance but it didn’t help graphics performance which demonstrates that the IGP is the bottleneck to performance, just as you would expect. Overclocking to the stable limit of 3.68GHz didn’t help performance any further.

In a straight head-to-head with the Asus P5N7A-VM the Zotac puts up a decent fight but it is consistently outclassed. The lack of Display Port is a minor matter but the poor arrangement of the four USB ports is little short of negligent and it is not redeemed by the inclusion of a Firewire port. We feel that the lack of any software is another telling point against the Zotac and really don’t fancy the idea performing a BIOS update in DOS.


Zotac has made a decent fist of the GeForce 9300M chipset however the Asus P5N7A-VM is consistently better in almost every department.