The Zotac GeForce 9300-ITX WiFi is a tiny motherboard that measures a mere 170mm x 170mm so it has a certain cutesy appeal. That said, it doesn’t pack the same visual impact as the Micro-ATX Asus Rampage II Gene.


Unpacking the Zotac only takes a moment as the box doesn’t contain a huge pile of goodies. In addition to the motherboard you get two SATA cables, one SATA power adapter and the USB Wi-Fi module that gives the Zotac part of its name. We have previously seen the major elements of this motherboard in other models that we have reviewed. 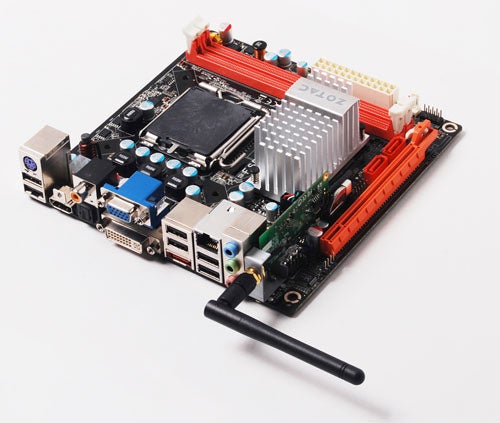 The Intel DG45FC is a Mini-ITX motherboard that supports LGA775 processors with Intel G45 graphics and we all know the G45 core is competent but hardly dazzling. We’ve also seen the Nvidia GeForce 9300 chipset in the Asus P5NA-VM as well as the slightly beefed-up GeForce 9400 when we reviewed the Gigabyte GA-E7AUM-DS2H. Those are the ingredients on the table so the question is whether Zotac can turn them into a tasty dish.


The layout of the GeForce 9300-ITX WiFi requires a few compromises as there is so little space to accommodate the various components. Intel got round this problem by locating three controller chips on the back of the motherboard which presumably raised the cost of manufacture. Zotac, though, has stuck to the traditional approach and has kept all of the components on the front of the board.

The layout is dominated by the LGA775 socket and the passive cooler on the chipset. Once you add two DDR2 memory slots, the 24-pin power connector and the PCI Express x16 graphics slot there is very little space remaining. As a result the four-pin ATX 12V connector is squeezed in tight behind the HDMI connector on the I/O panel very close to the PS/2 port and two USB connectors, so it’s a bit awkward to reach.


The other notable point is there are only two SATA connectors and no IDE connector so the storage options will be fully occupied by your hard drive and optical drive.

The connectors on the I/O panel do a good job of offering features that will appeal to most people so there are six USB 2.0 ports, one PS/2, one eSATA, Gigabit LAN, coaxial and optical audio and three analogue jacks as well as HDMI, VGA and DVI-I for the Nvidia graphics. We’re a bit disappointed to see there are only three analogue mini jacks on the Realtek ALC662 chip but we have to wonder how many people want or need full analogue surround sound.


There are three USB headers on the Zotac that would usually support six more USB ports but this motherboard has a trick up its sleeve. The package includes a Wi-Fi module that screws to the motherboard next to the analogue jacks. You see we knew there was a reason Zotac left a space there instead of installing six connectors.

The module carries the guts of a USB Wi-Fi adapter, in the shape of a VIA VT6656 802.11a/b/g chip, and connects to one of the three USB headers. Once the motherboard and adapter are installed in your PC you can attach the external antennae and Bingo your Media Centre PC market can connect to your home network and the Internet without any messy cabling. We had no trouble connecting the Wi-Fi module and it was a rapid job to install drivers but even though the adapter could see six routers within 100 metres or so we were unable to make a wireless connection. In its manual Zotac describes the procedure for making a wireless connection using VIA’s WiFiSet utility however this software was developed for Windows XP and was not updated for Windows Vista so we were stuck using Windows Connect Now. 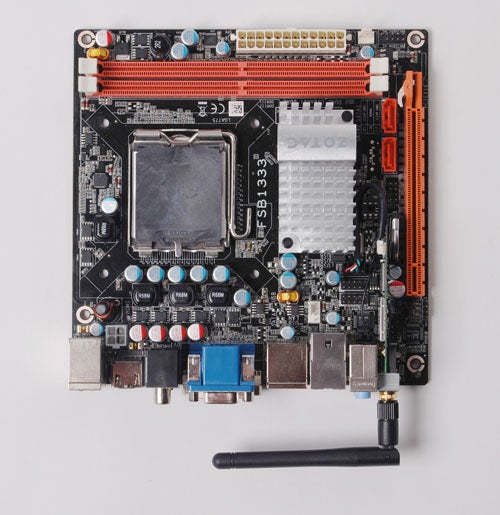 
In any event if we were installing a Media Centre PC we would ignore wireless and use Home Plug to deliver a solid, reliable, fast and secure connection to the home network.

We tested the Zotac with a £150 3.16GHz Core 2 Duo E8500 as well as a budget £39 Celeron E1200 that is clocked at a modest 1.6GHz – a much more sensible option for a smll form factor system like this. We compared the Zotac with the Intel DG45FC and found that CPU, memory and hard drive performance were identical. In fact we used an Intel SSD rather than a hard drive but the point stands.


The difference between the two systems lies in the graphics department where Nvidia wipes the floor with Intel in almost every respect including power draw. For some reason the Intel graphics score better in PCMark05 than Nvidia. The Zotac chipset cooler was a consistent five degrees warmer than the Intel chipset but we’re talking about temperatures in the 35-45 degree range so none of the permutations could be called hot. 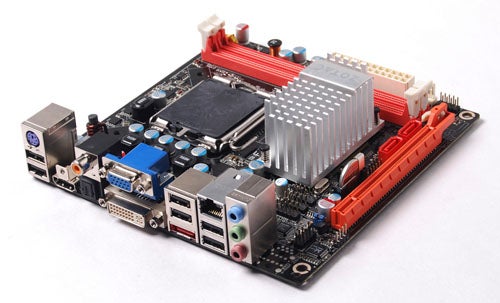 If you’re building a modest PC for the home or office and intend to use the integrated GeForce 9300 graphics to handle movie decoding and older games then we are quite sure that a cheapo Celeron will prove more than adequate. Gamers will want a proper Core 2 CPU along with a graphics card and this brings us to a quirk of the Mini-ITX form factor. We don’t regard either the Intel DG45FC or the Zotac as proper Mini-ITX as they use a regular power supply rather than an external one so rather than being able to make it into a Mac mini sized machine you’re still going to have to use a fairly large traditional PC case. If you intend to use a graphics card you’ll need a larger case anyway, but then you might as well plump for a Micro ATX motherboard in the first place.


Zotac has kept the price of the GeForce 9300-ITX WiFi reasonably low at £99 plus VAT but it gives with one hand and takes with the other as evidenced by the two SATA ports and the iffy wireless adapter.


The Zotac offers all the features you need for a Media Centre PC but it doesn’t take full advantage of the Mini ITX form factor so we recommend that you think long and hard before you decide whether it is the right candidate for your next PC build.