Saying the words “Hideo Kojima” can conjure up images of a game laden with overwrought yet cheesy melodrama, focused on cinematic poses and lengthy expositions that probably question the meaning of war, death, love, and robots. This accurately describes Zone of the Enders, which doesn’t stray far from this formula, except here the robots are bigger, more plentiful and they fly.

This sequel was released first on PS2 in 2003 before the entire series of games saw an HD remaster in 2012 in the Zone of the Enders collection. The main upgrade in this PS4 release is that it’s now possible to run the game at 60fps in 4k instead of 1080p, and it includes a first-person mode designed to work with PSVR. 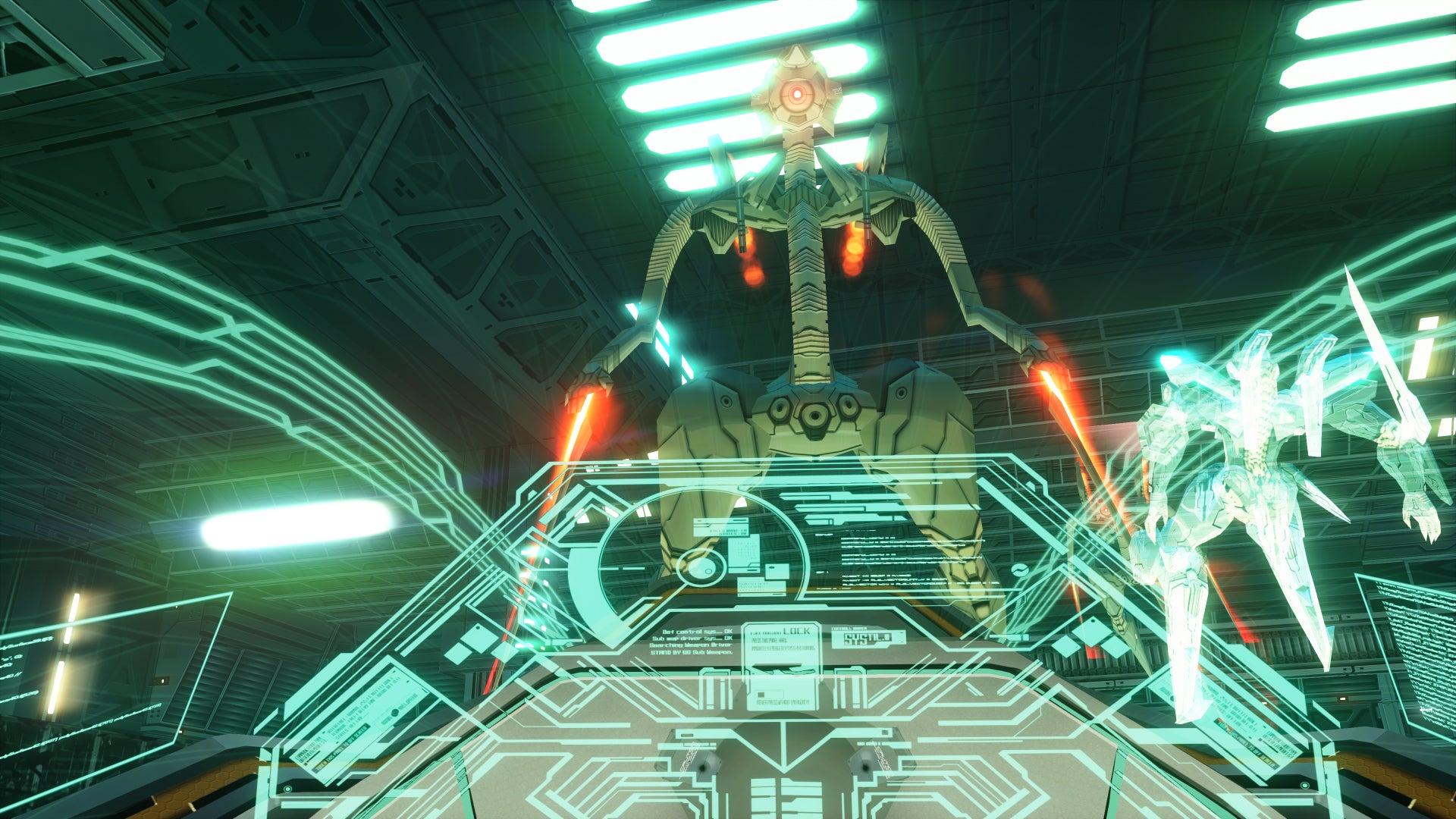 The base game itself remains mostly unchanged from 15 years ago. It’s a third-person flying mech battle game focusing on quick movements and mixing up between range and melee, high-speed boosting or normal movement, attacks on a single target or against a teeming crowd.

There’s a fun skillcap to learn between slickly mixing up different sub-weapons, dodging, guarding and using guard-busters against several different types of enemies. Rarely since has a flying mech game managed to make it so satisfying to quickly clear out a swarm of enemies with beautifully arcing multi-lasers, before comboing into an elegant dash attack combo to finish up harder targets in the crowd.

Above the regular enemies, most of the boss fights in the game boil down to figuring out what attack cycle or unique weakness they have to make them vulnerable to health bar wailing. Rather than the Dark Souls of mech fighting, these puzzle boss fights instead share many similarities with Kojima’s other more well-known series Metal Gear Solid.

Sadly in the near two decades of games design iteration since Zone of Enders’ first release, many things have moved on that can make it a chore to play today. Some parts can easily devolve to fighting through corridors or boxes of enemies that features endless respawns you have to destroy to get the damn things to stop. 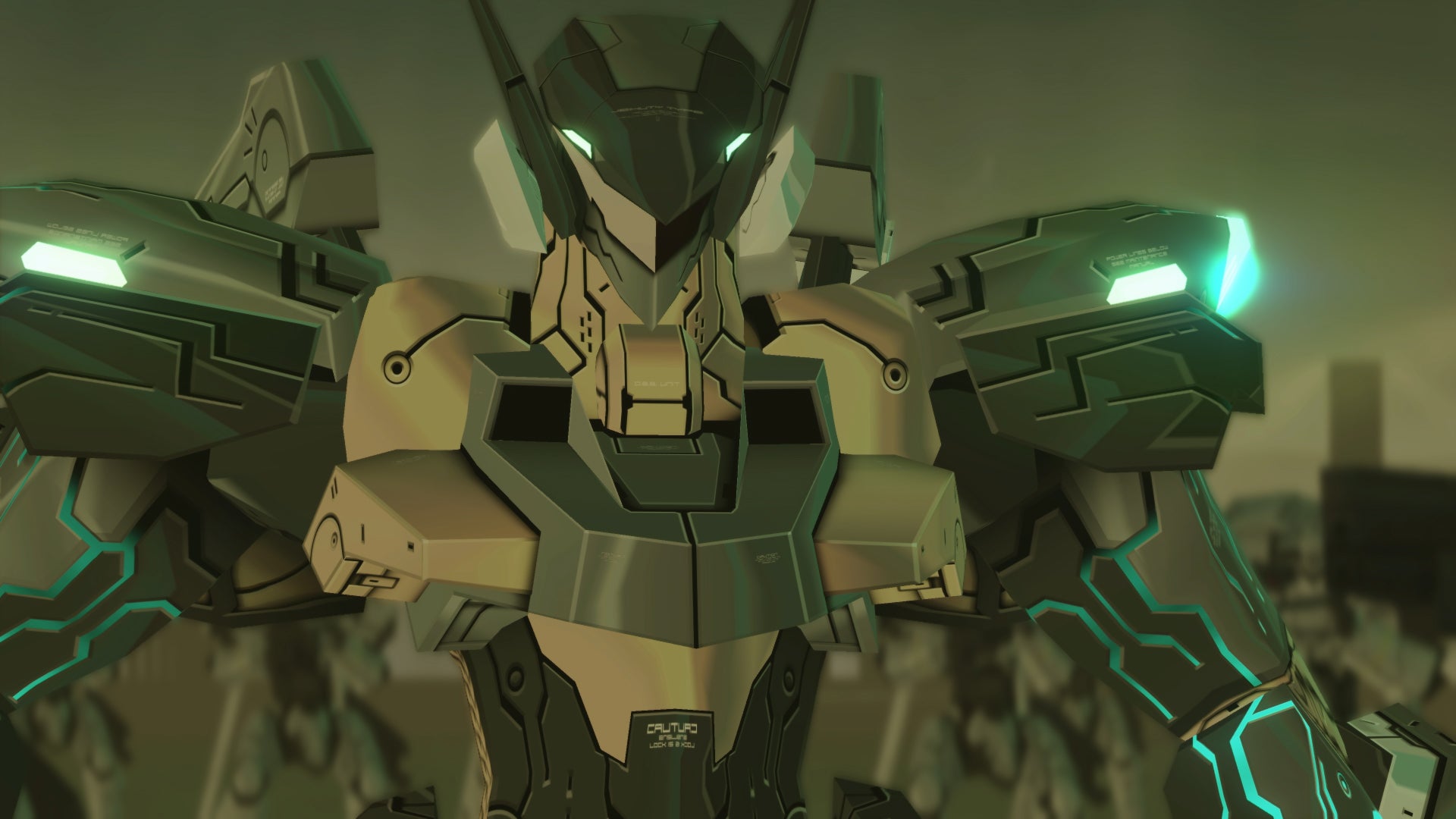 Things are further slowed down by instances like coming across a gate that the mech, just one cutscene ago capable of orbital space flight, suddenly cannot fly over but instead needs to side-track for 10 minutes to flick two opposing gate switches off to progress. Don’t even get me started on the curse of escort missions that feature auto-targetable allies.

If you’re new to the series this is a slightly confusing title to come in blind on, as the game doesn’t deign to include a recap of events from the first game and Kojima’s approach to world-building or to ease you into the story is to, uh, not. Rather characters make constant references to the world they live in, but never expand on what they mean by their exposition and rarely are you given a context.

You play as a pilot called Dingo, who is not an Australian dog. In the course of an hour Dingo goes from being a mech miner chatting about space-sports, to fighting his old dead friend/lover (I was unsure) that’s been downloaded into an AI as well as confronting his old general who is now, coincidentally, the big bad wanting to do all the evil in the universe.

What a day. This felt like a hell of a lot of surprising connections, really, when Dingo only ends up involved in the story because he was accidentally working next to the big box which contains a plot-important super mech. Not knowing the plot so much isn’t that much of a hindrance to the stylish action, but the game has probably up to two to three hours of cutscenes in a six to eight-hour title. 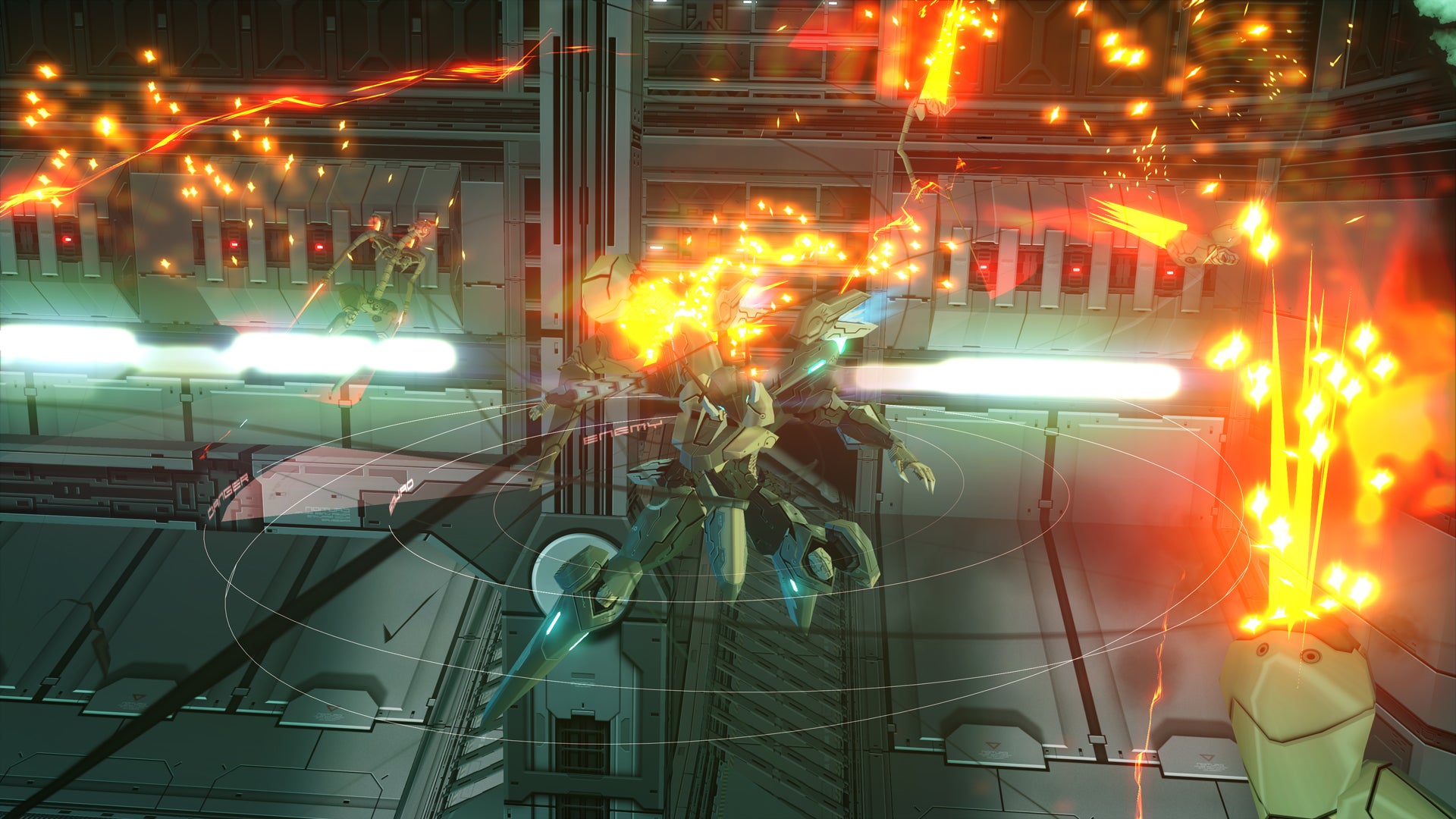 You can piece together the basic plot threads: like good mech vs bad mech, stop the bad people, this person is your friend, who names their kid Dingo etc, but when so much time is spent on heavily saying rather than showing or bridging it can be a bit mystifying. It’s not helped by the game’s English dubbing, which whilst serviceable is prone to falling into flat acting and bad directing.

Thankfully, the rest of the game’s re-mastered audio is crisp and clean as the soundtrack beautifully matches the action, remaining a joy to listen to throughout and adding a special vibe to each of the main fights in the game. An audio polish and 4k re-re-release would be slightly underwhelming, so the PSVR is the main draw to buy this version for old fans and newcomers alike.

It places you as Dingo directly in the cockpit of your battle mech, bringing a sense of scale and 3D to the series that makes it feel unique enough for another playthrough. Fighting and quickly zapping around is a truly amazing experience, and as you get into the game’s more colourful and crazy battles it certainly helps bring you into the moment.

There are numerous options to tweak the VR experience to your liking, from intensity of edge blackening to tweaking your body size and head position in the cockpit (unless you enjoy feeling like a 10ft giant sadly cursed to be a tiny skulled outcast as the standard settings imply). Also included is the option to watch the entire game as a movie through your headset, as whilst the anime cutscenes remain flat the other cutscenes are sometimes shown in 3D. 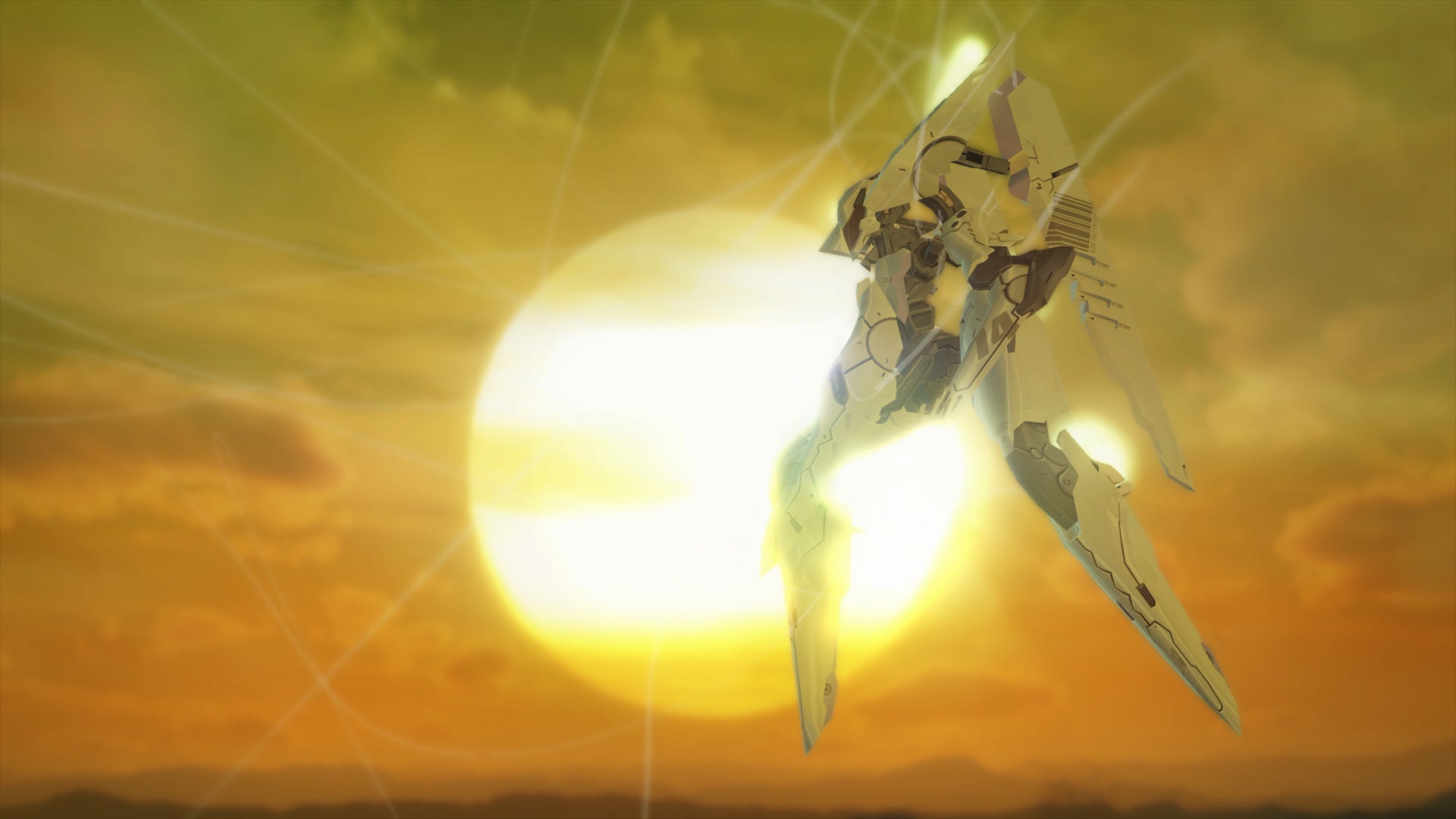 Beyond this, though there haven’t been many considerations to changing the base game to fit this new first-person VR experience. A “very easy” option has been included to account for how much more difficult it is to play in this fashion, which mostly works but is still awkward as it doesn’t take long for a third-person combat game to start feeling jarring from a cockpit perspective.

Even if not quite nausea-inducing, the close combat sees you locking on and quickly dashing to many different enemies (where there can be dozens on screen at once) that becomes disorientating easily. The inclusion of a model of your mech from a third person perspective on the dash helps alleviate some of the confusion of what you are doing, but it’s not as easy to read as it is playing the standard game.

The addition of PSVR is gimmicky, but fun, with VR shining in cabin-based games like this one, was re-jigged to be. The rest of the game despite showing its age heavily in places manages to feel a fresh experience, as surprisingly nothing has really come out in all this time that comes close to how slickly agile aerial mech combat feels here.

If you missed out on the 2012 remaster as a fan, like mechas a little too much or have a PSVR gathering dust it could be worth your time, but there’s nothing new here if the series has never drawn you in before.