If the often indistinguishable plot lines that tend to be part and parcel of your average JRPG leave you feeling cold and confused, then the opening moments of Zodiac: Orcanon Odyssey will make you want to tear your hair out. The first few cut-scenes leave you feeling like you’ve walked in right in the middle of a soap opera, with narrative strands being played out left, right and centre without any real explanation as to just what’s happening.

It’s an opening that’ll leave a lot of people either rolling their eyes at the complete lack of originality – a mythical kingdom under attack from beasts outside the castle walls hardly treading new ground for a JRPG – or hovering their finger over their phone’s home button, with the whole affair playing out like a bit of a self-absorbed mess. The best thing you can do, however, is stick with it. Things soon get much, much better.

Namely because Zodiac: Orcanon Odyssey’s take on the JRPG is, aforementioned plot lines aside, especially easy to digest. Taking on specific quests designed to secure your kingdom’s future as the game progresses, much of your time is spent exploring a variety of different areas on the back of a huge gryphon, darting between different battles signposted by the kind of swirling black holes you might expect to see in an episode of Doctor Who. Flying into these portals then takes you into a simple turn-based battles where slaying a variety of different monsters blocking your path (some based on real world creatures, like rats, others seemingly coming from the depths of developer Kobojo’s collective imagination) is your one and only task. 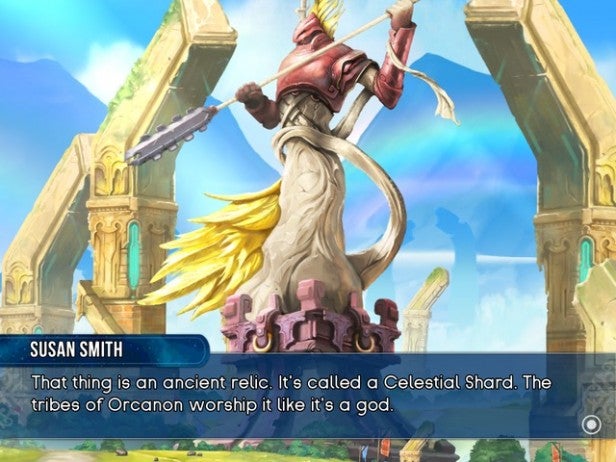 This is essentially the meat of Zodiac: Orcanon Odyssey’s play, with a selection of different moves for you to pick from fanned out in a wheel like structure. To play each move, you simply hold your finger down on its associated icon and drag it over to the enemy, with some swipes striking hard at your opponent but leaving you vulnerable to counter attacks over the course of your next couple of turns, while others act more as a long play, casting various spells over your rivals that sap their health gradually as the battle progresses.

Given that success within these battles is largely based on your ability to size up your enemies and play the right moves accordingly, it’s somewhat annoying that just which moves are attack based and which offer a more defensive bent aren’t more clearly labelled. It’s very easy to play the wrong move entirely simply because you can’t decipher between the different symbols designed to highlight them, though more often than not making a duff attack every now and again isn’t a gamebreaker. 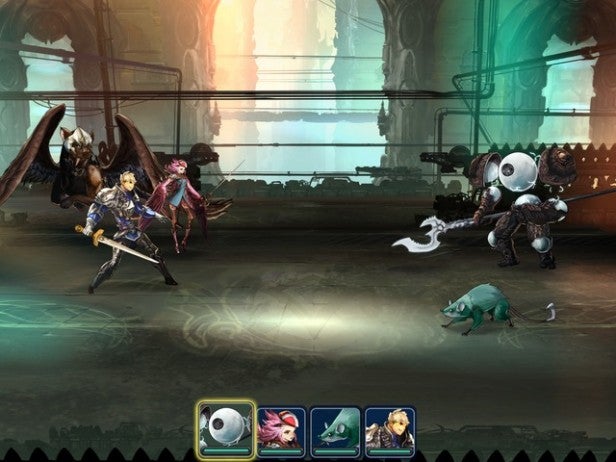 Indeed, if anything Zodiac: Orcanon Odyssey’s biggest point of note is how it’s made the JRPG – typically a genre reserved for a particular, dedicated breed of gamer – and made it entirely entertaining for the rest of the mobile masses. True, there’s absolutely nothing original here when it comes to the game’s story, or indeed the make up of the battles themselves, but as a package it just works. It’s no easy task to take a genre that enjoys hundreds of releases a year across the globe and retool it for a fresh audience, typically wary of its wares.

What’s more, the environment it is played out in is simply stunning. It’s a testament to the growth of iOS that, even though Zodiac: Orcanon Odyssey is played out in a 2D world, the level of detail and creativity that has been laced into the visuals is beyond what you would have seen on mobile three or four years ago. 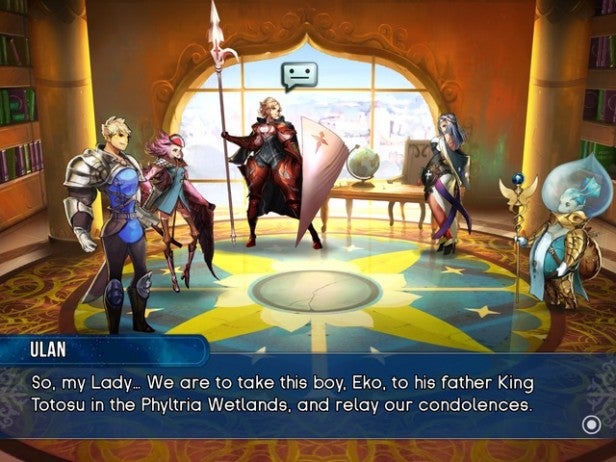 Yes, there are most definitely things that could be improved and it’s entirely valid to suggest that the endless run of explore, battle, explore, battle is a cycle many may soon get tired of, but this is hardly a criticism unique to Zodiac: Orcanon Odyssey. Indeed, if you’re looking for a JRPG that taps into familiar themes, familiar models that have existed for the best part of 30 years but still somehow manages to make it fun, then French start-up Kobojo has delivered the game for you. Just remember to skip those opening cut-scenes – you’d be better off watching the EastEnders omnibus.

Verdict
Though not especially original in any regard, Zodiac: Orcanon Odyssey’s biggest trick is its ability to take an established JRPG formula, with a turn-based battle set up, and turn it into something that feels as fresh as it does fun. One for newcomers to the genre, then, fittingly decorated with some absolutely stunning visuals.